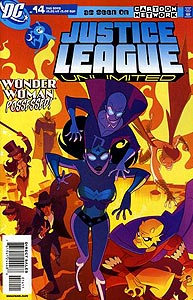 Brief Synopsis: Deadman recruits the Justice League for a trip into Limbo.

This story has been reprinted in:
Justice League Unlimited Volume 3: Champions of Justice (2006)

Page 2, panel 3
Booster Gold asks Flash to explain who Deadman is. (This is apparently Booster's first JLU meeting with Deadman.) In this issue, Booster acts as an audience surrogate, a literary vehicle for explaining necessary concepts to the reader. This is a familiar role for the character of Booster Gold, as he is typically portrayed as inexperienced compared to his fellow heroes.

Page 3, panel 1
Booster Gold asks Flash to explain what Limbo is. That's certainly a necessary bit of information in a story with the title "Everybody Limbo!" (Flash does not explain that the story title is a pun, juxtaposing a familiar song lyric with a trip to an allegorical land of Christian theology.)

Page 5, panel 5
Having completed his role as the mouthpiece for story exposition, Booster Gold makes his final appearance in this issue.