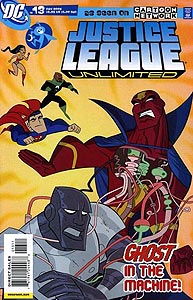 Cover Description: Red Tornado and Steel are linked via cables while John Stewart, Superman, and Wonder Woman rush towards them. (No Booster Gold.)

Brief Synopsis: When Red Tornado runs Amok, it is up to the Justice League to get him under control and restore the League's good name.

This story has been reprinted in:
Justice League Unlimited Volume 3: Champions of Justice (2006) 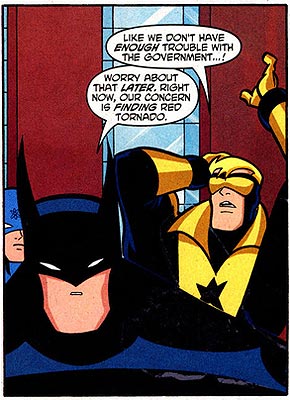 Page 7, panel 5
When Red Tornado crashes through a Watchtower window, all of the Leaguers assembled are pushed out into space, including Booster Gold. Oh, no! What will a character with an force field power do? Oh, that's right, he'll get rescued by Green Lantern, who creates a force field.

Page 10, panel 2
Booster Gold and the rest of the League trace Red Tornado's signal device to Phoenix, Arizona, where Tornado has been destroying buildings and roads. (Did they really need a signal device for that? Wouldn't CNN be covering widespread destruction in a major American city of 1.5 million citizens?)

Page 15, panel 5
Booster Gold and Green Lantern charge Red Tornado (perhaps in an attempt to trap him in a force field?), but they are both incapacitated when Tornado "switched from a tornado to a vortex...!" It isn't clear what Green Lantern means by this statement, as a tornado is a vortex. (He's an engineer, not a weatherman.)