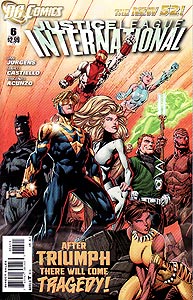 Issue Summary: In Washington, D.C., Booster Gold joins Batman in tracking down the bombers of the Hall of Justice. As the pair storm the hotel of the bombers and disarm their latest bomb, Batman gives Booster advice and encouragement about being the leader of the Justice League International.

In Peru, Guy Gardner, Ice, and Rocket Red disassemble the final robotic giant. Gardner and Ice discuss how much credit Booster Gold should receive as team leader, unaware that Rocket Red appears to be interacting with not-quite-inert giant.

In New York, Godiva shows August General in Iron typical of American life outside the United Nations building. Their good mood is ruined when August General asks Godiva personal questions about her interest in Booster Gold. Their awkward conversation is interrupted by a terrorist attack, forcing Godiva to blindly attempt to disable a bomb.

Inside the United Nations Building, Booster Gold, Fire, and Vixen join Andre Briggs and Emerson Esposito in defending the infant JLI against Chairman Bao and Members Faber and Sidorov of the United Nations Security Group. Booster gives an eloquent speech, which coupled with the support of newly arriving August General in Iron sways the council in continuing their support of the team.

Weeks later, the JLI is officially unveiled to the public. Their glory is short-lived, however, when an unknown assailant bombs the proceedings.

Page 1, panel 1
Booster Gold joins Batman on a Washington, D.C., tenement rooftop at 4:37 in the morning. It is not clear how much time has passed since the conclusion to the previous issue.

Page 2, panel 1
As Booster strikes one of the bombers responsible for destroying the Hall of Justice (as seen in Justice League International, Volume 3, #1), the bomber says "this can't end now! Detonate the bomb!" It is not explained how committing suicide would keep "this" from ending now. Bombs do tend to end things.

Page 4, panel 4
POWER UP: Booster demonstrates the ability to project his force field remotely at a moment's notice. Previous versions of Booster's power suits had this ability, but were considerably slower to employ it.

Page 7, panel 4
LIQUIFIED TIME: More post-Flashpoint reality bending: despite her comment, what really came between Ice and Guy Gardner was Ice's death in Justice League Task Force #14. And despite Gardner's comment, it was revealed in Justice League: Generation Lost #12 Ice wasn't really a goddess but a super-powered gypsy.

Page 11, panel 4
August General in Iron inexplicably tears off his clothing to stand in front of a speeding van headed towards United Nations Headquarters. The security for the United Nations is handled by the U.N. Department of Safety and Security with a staff of scores of thousands of security personnel. Why are none of those highly-trained personnel present when a van accelerates down East 44th Street directly towards their New York world headquarters?

Page 12, panel 6
How are single strands of Godiva's hair able to stretch to reach several feet away from her head? How are they strong enough to pry apart metal? And how do they "feel" anything? With powers like that, she has no need to worry about fitting in on a team where one of her teammates can merely mimic nearby animals and another just freezes water. 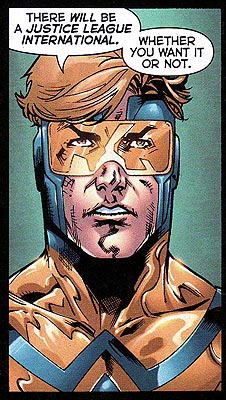 Page 15, panel 8
LIQUIFIED TIME: Earlier, Booster Gold had claimed that he didn't know the names of all of his teammates when he accepted the role of team leader in issue #1. While it is true that Booster had never met August General in Iron, and had only briefly crossed paths with Godiva, all of the other members of the team had been members of one pre-Flashpoint Justice League or another in years prior. However, if the post-Flashpoint has only been together for 5 years, it is unlikely that any of the current members of the JLI have ever been on the team's roster.

Page 16, panel 5
HIS STORY: Booster is unusually forward in admitting that he was a failure in the future. While his history as a time-traveler is well-publicized, Booster has typically kept his nature as a gambler more private.

Page 17, panel 4
August General in Iron and Godiva join the meeting with news that they have just foiled a bombing "a few minutes ago." How has news of this life-threatening event not yet reached the Chairwoman of the United Nations Security Group until August General walked into the room? Do they not have telephones in the DCnU?

Page 18, panel 1
MEET THE PRESS: "Weeks later" Andre Briggs formally introduces the new Justice League International to the public and press before United Nations Plaza in New York city. The flagpoles behind the presentation represent the member nations of the United Nations and should be presented in English alphabetical order. Seen from left to right are the flags of Uruguay, United States, United Kingdom, Turkmenistan, Turkey, and Japan.

Boosterrific Review: Though this issue focuses squarely on much needed character development, some improbable events (like the bombing foiled by Godiva), slow pacing (especially the over-long and under-dramatic bomb scene with Godiva), and dissatisfying art from the "guest penciller" and "guest inker" (what kind of bomb was that Godiva disabled, anyway?) make this no more than an average comic book.