“Rage Against the Machine”

Story Notes: The title to this story is also the name of an alternative band.

Page 6, panel 3
Blue Beetle II and Booster Gold debate the trustworthiness of Bloodwynd I once Dreamslayer reveals that the two have met previously. Also present in combat against the towering Dreamslayer are Captain Atom, Fire, Maxima, and Wonder Woman.

Page 7, panel 2
Dreamslayer summons the New Extremists Brute, Cloudburst, Death Angel, Gunshot, and Meanstreak to attack the assembled Leaguers. The League previously fought the New Extremists in Justice League America #79, prior to Booster's acquisition of his new battle armor. This is Booster's first confrontation with any of the Extremists.

Page 12, panel 3
Months after losing her abilities in the confrontation with Doomsday (in Justice League America #69), Fire's ability returns unexpectedly during a struggle with Meanstreak. 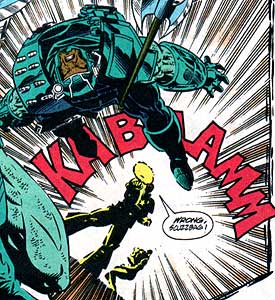 Page 14, panel 4
POWER UP: Booster demonstrates a ranged attack that disables Gunshot with a single blast from his right wrist. The shot is accompanied by the sound effect "Kablamm."

Page 21, panel 1
Returned to the Justice League Headquarters in New York, the League is busy arguing about the loyalty of Bloodwynd when they are interrupted by the sudden arrival of Vandal Savage. This is Booster's first encounter with Savage, an immortal who has long tormented Booster's time-traveling friend Rip Hunter.

Boosterrific Review: This issue is so ugly, it's almost cruel. Fortunately, it is becoming clear that something significant is on the near horizon, and the drama that this situation creates provides a necessary incentive to keep reading despite bleeding eyes.