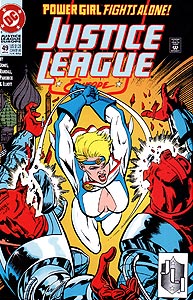 Page 16, panel 3
FASHION ALERT: The Justice League America arrives in London, responding to a Justice League Europe emergency signal. JLA members present include Agent Liberty, Bloodwynd II, Booster Gold, Fire, Guy Gardner, Maxima, and Wonder Woman. This is Booster's only willing adventure into combat with the Justice League while he possesses no functioning power suit or weaponry. For this adventure, Booster wears a replica of his destroyed costume without his power bracelets and with solid gold leggings. (An editor's note in the "Europinion" letter column of issue #55 describes the costume as "a pair of Boosterware™ spandex.") This is Booster Gold's first on-panel meeting with Power Girl's cat, having missed the JLA's previous misadventure with it in Justice League America #37. 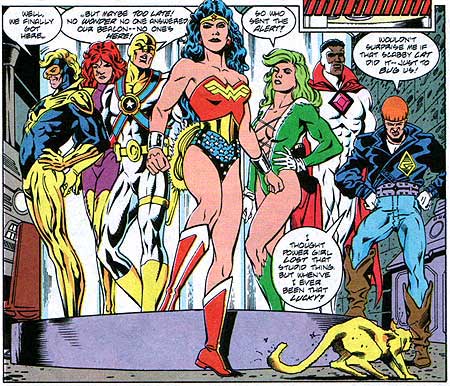 Page 17, panel 4
After meeting with Flash III, the JLA find the young heroine Maya and the Crime Tailor in the Justice League Europe's London castle headquarters.

Page 17, panel 5
As Booster accesses the JLE computer to update his companions on the situation, it appears as though Blue Beetle II is standing behind him. However, Beetle is in a coma in New York City, was not shown teleporting into London with the JLA, and is not shown in any other panels. This is likely an artistic error (or an out-of-body apparition of Beetle).

Page 19, panel 7
Bloodwynd chastises Booster because of his hesitancy to invade Russia in order to rescue the subdued Justice League Europe. Specifically, he questions Booster's weakness in the wake of the recent destruction of his weaponry at the hands of Doomsday (as seen in Superman, Vol. 2, #74).

Boosterrific Review: This issue strives to be bigger and better than it actually is. The art is overly-simplified, the plot inorganically hollow, and the continuity ridiculously incongruous with events in the DC Universe-at-large and the Justice League chronology in specific. (Death of Superman or no, how can Russia be overthrown by a villain and the JSA incapacitated without other DC heroes becoming involved?) In short, this comic book is pretty much mediocre all the way around.