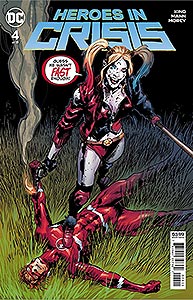 Cover Description: Harley Quinn stands over the Flash with a smoking gun. (No Booster Gold.)

Brief Synopsis: Investigation continues into the truth behind what went wrong with Sanctuary.

Issue Summary: Many pairs of heroes deal with the fallout of the Sanctuary killings: Tempest and Donna Troy mourn the death of fellow Titan Wally West. Batman and Flash continue to investigate the evidence. Booster Gold is interrogated by Wonder Woman. Lois Land talks to Clark Kent about the anonymous tips she has been receiving about Sanctuary. Batgirl tracks down and offers help to Harley Quinn. Black Canary and Green Arrow urge speed in the investigation.

Later, Booster Gold is broken out of his cell in the Hall of Justice by his friend, Blue Beetle.

Superman tells Batman and Wonder Woman that Lois Lane has reported some of what she has learned about Sanctuary to the general public. This news makes Harley Quinn happy.

Page 2, panel 1
This issue opens with an homage to the original, Silver Age Teen Titans by way of graffiti on a wall. The graffiti includes references Hatton Corners, the setting of the Titans' earliest adventures in Brave and the Bold #54 (1964). Most of the rest of the names on the wall are artists and editors involved with the making of this comic, though Jose Luis Garcia Lopez is tagged because his style is the inspiration for the Titans' portraits painted on the wall.

Page 5, panel 2
After investigating all the evidence of the Sanctuary murders, Barry Allen comes to the conclusion that Booster Gold must be guilty. Batman has seen the same evidence and has concluded that the guilty party must be Harley Quinn. (It should be noted that so far through three issues, very little of this evidence has been revealed to the reader.) Are they both guilty? It sure seems like the Justice League could use a time traveler to investigate this. Or a magician. Or a telepath. Or a living computer.

Page 6, panel 1
Or a Lasso of Truth! Under the influence of Wonder Woman's magical lasso, Booster Gold once again flashes back to the moment he encountered Harley Quinn standing over the murder victims at Sanctuary as previously seen in Heroes in Crisis #3. The only new information revealed is that Harley hit Booster with her mallet and knocked him out. When he woke up, everyone else was dead and he wasn't.

Page 6, panel 5
POWER DOWN: "What about your shield? Brainiac's shield," asks Wonder Woman. To clarify, though its technology did original with Braniac, Booster Gold's force field belonged to Braniac 5 of the Legion of Super-Heroes. And in answer to Wonder Woman's question, Booster doesn't know why it's not working (and we know he's not lying because of the Lasso of Truth).

Page 17, panel 4
Booster Gold is locked in a cell in the Justice League's Hall of Justice... with Blue Beetle. This is not the first time that the pair have been seen together in New 52/Rebirth continuity — that would be the Flash/Speed Buggy Special — but this is their first on-panel dialog together. It remains unclear what their shared past might be, but the two are clearly longstanding friends again, warming the hearts of Blue and Gold fans everywhere.

Page 18, panel 3
Satisfied that Booster was not responsible for the death of anyone, Blue Beetle breaks him out of his cell so that the two of them can get to the bottom of this mystery. Beetle's parting slogan, "bros before heroes" is a pun on the urban slang "bros before hoes," an uncouth, male way of saying that your platonic male friends are more important than romantic relationships. Though The Office often gets credit for promoting the phrase in a 2006 episode, The Online Slang Dictionary notes that it has been in common use since at least 2001.)

Boosterrific Review: There's a lot of connective tissue here that is useful (and desirable) for character-building, but in the absence of specific context, it's hard to tell what, exactly, is going on between the many conversations. It feels more than a little like this issue is marking time. I give it three stars only because of the delightful 3-page Blue and Gold reunion.