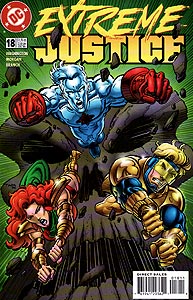 Cover Description: Booster Gold, Captain Atom, and Maxima fly away from the skull-shaped mountain headquarters of the Legion of Doom.

Brief Synopsis: The Justice League West concludes its final battle with the Legion of Doom.

Issue Summary: Somewhere in Florida, The Legion of Doom and Justice League square off in battle. Maxima fights Brainwave Junior (under the influence of his father); Amazing Man, Houngan; Killer Frost, Zan and Jayna; the Madman, Blue Beetle; Captain Atom, the corpse of Major Force; and Booster Gold, a robot version of Gorilla Grodd.

Amazing Man overcomes Houngan's magic by turning into "cold iron." Zan and Beetle overcome their opponents through force and guile.

When Booster Gold is knocked out, Skeets takes control of his implants and overrides Major Force and the Grodd-droid.

Eventually, Maxima is able to free Brainwave Junior from the memories of his dead father.

Issue Notes: This is the last issue of the series, canceled to allow for a relaunch of the Justice League franchise by writer Grant Morrison in the series JLA.

Page 2, panel 1
The Justice League West (Amazing Man II, Blue Beetle II, Booster Gold, Captain Atom, Maxima, Zan and Jayna) is in combat with the Legion of Doom (Brainwave, Gorilla Grodd Robot, Houngan, Killer Frost II, the Madmen, and Major Force) in a Florida swamp near the Legion of Doom headquarters. The narrative balloons on the panel are fold from Booster Gold's perspective.

Page 5, panel 4
Blue Beetle fires a "fibrous polymer grenade" at his old enemies, the Madmen. (Their enmity dates back to Blue Beetle's Charleston Comics origins.) Beetle claims to have gained the recipe from "this guy who just drifted through from some alternative universe recently." This reference is to Marvel Comic's Spider-Man, a character that has provided much inspiration for Blue Beetle in recent years. Spider-Man spent time with DC characters during the recent DC Versus Marvel crossover mini-series, though never were Blue Beetle and Spider-Man shown together.

Page 7, panel 3
Booster is knocked unconscious by the Gorilla Grodd robot while trying to communicate with Skeets, who is experiencing a computer error (presumably launched by the robot Grodd) within Booster's Jrxian Flesh-Driver armor.

Page 17, panel 1
While Booster remains unconscious, a rebooted Skeets is able to activate Midas Mode and interface with his implants and power-suit. In this manner, Skeets is able to incapacitate Major Force and Gorilla Grodd... 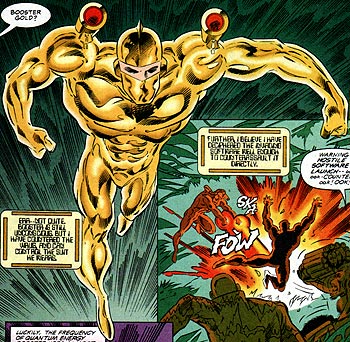 Page 18, panel 1
...modestly giving Booster credit for the activity. In this panel, the Grodd robot sings the theme song to the 1970 television show
Lancelot Link, Secret Chimp a live-action series in which dubbed voices were provided for chimpanzee actors.

Page 22, panel 3
Booster, finally recovered, poses with the rest of the Justice League West following the defeat of the Legion of Doom. Booster has recovered his senses just in time for the cancellation of the title. Though the title was cancelled to make way for a single, unified Justice League title featuring the "Magnificent Seven" lineup of Aquaman, Batman, Flash III, Green Lantern (Kyle Rayner), Martian Manhunter, Superman, and Wonder Woman, the Extreme Justice team will continue to appear in guest spots for several months.