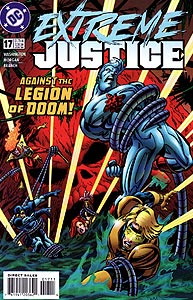 Cover Description: Blue Beetle, Booster Gold, Captain Atom, Firestorm, and Maxima are captured by metallic tentacles in a swamp near the entrance to the headquarters of the Legion of Doom.

Brief Synopsis: The Justice League faces off against the Legion of Doom.

Issue Summary: A couple of criminals in a van are pulled over by a policemen. The officer is soon overcome by some sort of mind control, and the criminals continue on their mission to the Quorum military installation.

Amazing Man and Maxima treat Jayna and Zan to a meal in Reno, Nevada. They discuss life on Earth, cuisine, and secret identities. Elsewhere in the same mall, Blue Beetle and Captain Atom discuss Atom's identity crisis and plan to assume the name "Cameron Scott."

The next day at a team meeting, Blue Beetle mentions that Firestorm has left the team for rehabilitation for his drinking problem. Beetle follows that news with a report that Major Force's corpse has been stolen from the Quorum facility. The culprits have been tracked to south Florida.

No sooner does the team arrive in Florida than they are attacked by The Legion of Doom.

Story Notes: The title of the story in this issue is a palindrome, a phrase which reads the same if read from left-to-right or right-to-left.

Page 12, panel 1
Booster Gold joins Amazing Man II, Captain Atom, Maxima, and Zan and Jayna for a briefing by Blue Beetle II regarding recent odd events that may bear investigating. With their new direction, Captain Atom's Justice League West has agreed to vote on potential missions, making them a more democratic body than Booster is likely used to. During Booster's tenure with the United Nations' sanctioned Justice League, someone usually assigned the missions and he completed them. Firestorm V is not present, having taken a leave of absence from the team to deal with his drinking problem.

Page 15, panel 2
In back-to-back instances, Skeets speaks up, volunteering information to answer questions regarding the activities of Killer Frost. First Booster and then Beetle seem unsettled by Skeets' information, though it is not explained whether this is because they forget he is present within Booster's Mark X armor, are not used to his interjecting into their conversations, or some other reason altogether.

Page 17, panel 1
Traveling through the upper atmosphere in Blue Beetle's new "all-terrain, multilaunch, semi-ballistic craft," Booster becomes nauseated and vomits. Flight sickness is a recurring problem for Booster. It took some time before he was comfortable flying in Blue Beetle's Bug, and he has never quite grown accustomed to the Justice League's teleportation devices.

Page 20, panel 1
SPOILER WARNING!: ...Brainwave II, former founder of Infinity, Inc. Besides the aforementioned encounter with Major Force, Brainwave is the only other member of this Legion of Doom that Booster has previously met on-panel. Reveal

Page 22, panel 1
SPOILER WARNING!: Though Booster has never met Gorilla Grodd face-to-face before, he recognized that something was wrong with Grodd before it was revealed that his opponent is actually a robot duplicate. Finally, Booster is able to back up his boast to Superman in Booster Gold, Vol. 1, #23 and recognize an android duplicate. Reveal

Boosterrific Review: This issue is presented in the familiar linear narrative common to the action-oriented super hero genre. If that's your cup of tea, you won't find any serious flaws in this issue, but you won't find anything groundbreaking, either.