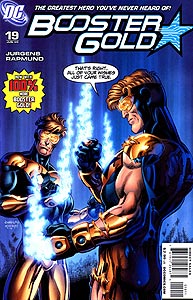 Brief Synopsis: Booster Gold must return to the present to save Rip Hunter.

Page 6, panel 1
HIS STORY: Booster suggests that the pair of Booster Golds travel "fifty, sixty years--right before the wars" to visit their future self at the age of 85. In addition to slyly establishing that Booster is approximately 30 years old ("future" Booster is only a few weeks older), this is also an uncommon reminder that the far future from which Michael Jon Carter fled survived an apocalyptic third World War (as originally revealed way back in Booster Gold, Vol. 1, #14) during the 21st century.

Page 13, panel 1
The Egyptian accused Booster of being a devil. Fittingly, Booster will one day take the role of The Devil when he joins the Justice Arcana in the pages of Trinity.

Page 15, panel 3
After getting a glimpse of his future self in action, Booster Gold admits that he is positively impressed by his own future. (Answering the question: what does it take to impress Booster Gold? Booster Gold.)

Page 18, panel 2
Skeets meets (and re-energizes) his future self at the End of Time in Vanishing Point. This is the first time that two Skeets from different times have met one another.

Page 19, panel 1
A PAIR OF DOCS?: Booster is returned to Central City exactly one second after he left (as seen last issue and in Booster Gold, Vol. 2, #4).

Page 20, panel 2
SPOILER WARNING!: Booster has his memory erased by... Booster Gold. Interestingly enough, the ramifications of selective memory modifications, even with the best of intentions, were among the more controversial outcomes of the events of the Identity Crisis. At the time, Booster Gold never voiced an opinion over the memory modification of villains for the greater good (if he even knew about it, of which there is no indication either way). It may be somewhat unsettling to see the same theory of selected memory erasure applied here to Booster Gold were it not for the fact that the elder Booster is applying it to his younger self; an act made necessary because elder Booster and younger Booster are one-and-the-same, and elder Booster has no memory of the earlier events. Therefore, as dictated by the the Fatalistic Theory of time travel, elder Booster MUST erase the memory of younger Booster in order for younger Booster to become older Booster. (Confusing, isn't it? Well, you knew you were in for trouble when you saw two Booster Golds on the cover, didn't you?) For more information on the variations of time-travel theory within the DC Universe, see here. Reveal

Boosterrific Review: The word "epilogue" in the title of this story accurately prepares the reader for the story within. All but 3 pages of the issue deal with Booster Gold's heart-to-heart with himself and providing closure for the story arc of the previous 4 issues (or 6 of the previous 8, counting the prologue story in issues 12 and 13). Surprisingly, this issue is more satisfying than the actual conclusion to the story, probably because of the heartfelt emotion expressed by the issues main characters, siblings Booster Gold and Michelle Carter.