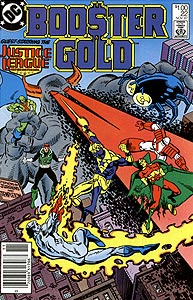 Cover Description: Booster Gold joins the rest of the Justice League, including (from left to right) Martian Manhunter, Guy Gardner, Captain Atom, Mister Miracle, and Rocket Red #7 in a battle with the Dimension X Destructo Agent in the cityscape of downtown Minneapolis, Minnesota.

Brief Synopsis: Forced to choose between the life of his sister and the innocents of Minneapolis, Booster attempts to do both with unfortunate results.

This story has been reprinted in:
Showcase Presents: Booster Gold (2008)

Page 2, panel 3
Skeets urges Booster to forsake the safety of his sister and "do the most good with your powers," saving the innocent bystanders inside the Metrodome. Skeets speech is reminiscent of the repeated lesson in logic given by Mr. Spock in the 1984 movie Star Trek II: The Wrath of Khan. (Despite Skeets logic, one can't help but recall Michelle Carter's rude treatment of the robot in Booster Gold, Vol.1, #16.)

Page 3, panel 5
The Destruction Agent has grown to a size large enough to paw at the Metrodome ceiling. The roof of the Metrodome is 172 feet above the playing surface. One fleeing fan comments that "we're going to have outdoor baseball at last," a reference to longstanding complaints about the Metrodome's poor lighting and unnatural feel.

Page 4, panel 1
Booster comments that he was nearly blown to St. Paul. St. Paul, Minnesota is Minneapolis' "twin city," and the two comprise the 16th-largest amalgamated metropolitan area in the United States. The centers of the two cities are about 10 miles apart from one another.

Page 4, panel 6
Booster uses the common expression, "God knows." This is Booster's first indication of any religious beliefs, and it is unclear if he uses the expression without any faith in a greater deity. It has been firmly established that a creator deity does exist in the DC Universe, directly empowering such heroes as the Spectre.

Page 5, panel 5
Booster ineffectually fights the alien above the IDS Tower Skyway over Nicollet Mall, one of the many skyways allowing pedestrian foot-traffic throughout downtown Minneapolis.

Page 7, panel 6
The Destructo Agent destroys the upper floors of the famous Foshay Tower in Minneapolis. The 29-story art-deco tower was completed in 1929 and has been on the National Register of Historic Places since 1977. The building is 447 feet tall, which gives us a good idea exactly how tall Destructo Agent has become.

Page 9, panel 3
Continuing its destruction of downtown Minneapolis, the Destructo Agent smashes the top off the U.S. Bank Plaza Tower 1. The Bank Plaza complex was completed in 1981 and is 40 stories high.

Page 11, panel 5
Rangor reveals that the Metrodome would have been the initial location of the alien invasion of Earth, had it not been destroyed in Booster's fight with the Destructo Agent. Though this seems an unusual location for an alien invasion, Booster's previous mention of a lack of superheroes in the Minneapolis-St. Paul metropolis may account for the aliens' choice. Or maybe they like snow.

Page 12, panel 4
The grinning monster now stands over half the height of the 775-ft tall IDS Tower, the tallest building in Minneapolis. Flying above the fracas is a Hughes 300 helicopter broadcasting for KS95, an FM radio station broadcasting popular music to Minneapolis-St. Paul.

Page 13, panel 3
Booster compares the composition of the alien to that of "Jello." Jell-O is a brand name gelatin desert. Comedian and actor Bill Cosby, known for his Jell-O pudding ads, added Jell-O gelatin to his list of sponsorships in 1987. Perhaps Booster is irritated about being passed by on the opportunity to be a Jell-O pitchman.

Page 13, panel 4
Booster uses his expandable force field to dispatch the alien monster. This is the opposite of the force field's use in compressing bacteria into submission in Booster Gold, Vol. 1, #17.

Page 14, panel 1
Though he earlier blew off Wonder Girl's offer of assistance from the Teen Titans, Booster accepts Martian Manhunter's offer of aid against Dimension X. Perhaps Booster has a problem letting kids do such a dangerous job as battling aliens.

Page 15, panel 1
Despite Manhunter's words, no Justice Leaguers accompany Booster to Dimension X to save Michelle. Booster explains that the gateway did not have enough energy to send anyone else through, thereby leaving the Justice League on Earth.

Page 15, panel 3
Michelle refers to Dimension X as "this God-forsaken hole!" Just like Boosters comments earlier in the issue, it is unclear whether this is just a speech idiom, or if this is indicative of Michelle's religions beliefs.

Page 18, panel 7
SPOILER WARNING!: Michelle is killed by a falling power cable inside the alien base. It was Booster's destruction of the alien's power source that caused the cave-in. Though Booster was doing what he thought was right at the time, he is indirectly responsible for the events that led to the death of his twin sister. Reveal

Page 20, panel 1
SPOILER WARNING!: Michelle's anti-gravity, golden tombstone is engraved "In Loving Memory, Michelle Carter," with an unadorned Christian cross and sun and the dates "2442-2466." The cross indicates that Michelle was a Christian of unknown, though likely protestant, denomination. Her dates of birth and death, if accurate considering the time displacement (though it is uncertain how she died in the year 2466, given that she returned to the year 1987 from the year 2462), would make both her and her twin brother Booster 24-years old. Reveal

Page 20, panel 2
This is Booster's first on-panel appearance with his new Vice President, MacKenzie Garrison. She is more concerned over a recent victory over B.G.I.'s corporate competition with LexCorp than she is with the funeral. The funeral is held on the coast of Maine, a state that has no known ties to Booster or family.

Page 20, panel 6
The Justice League has attended the funeral, though none of its members are particularly close to Booster. All of the Leaguers who battled the aliens are present, including Captain Atom and Rocket Red #7. Also present are Batman and Dr. Fate, the latter of which has recently withdrawn from active League duty but has arrived to teleport the tombstone to a realm outside of time. This is the first of many funerals that Booster will attend with the Justice League. However, this is the only funeral that Booster has ever attended where the person being memorialized has remained dead. So far. Nevermind.

Page 21, panel 5
Trixie Collins believes that she saw Booster in Metropolis harassing Superman while Booster claims to have been in Dimension X. This is a reference to events in Action Comics #594.

Boosterrific Review: The first half of this issue is largely what one would expect based on the cover: Booster Gold and his Justice League guest stars united against an alien invasion. That only serves as misdirection for the surprise "shock" ending to the story. The loss in this issue is fully Booster Gold's, and Dan Jurgens deserves full credit for making the audience empathetic to Booster's pain. (Without such emotional ties to the main character, we would no doubt be jumping on the opportunity to accuse Jurgens of cheap theatrics for the events of page 18, especially since the character who dies is no more a fully-realized character than were the characters Benny and Marty who were tortured and killed previously in the series.) In sum, this is a pretty good issue made great by the range of emotion between the covers and some spot-on characterization.

(1 vote)
KMD (Nov. 11, 2009, 15:20:48)
A solid issue but not great-the relationship between Michelle and Michael was never really fleshed out in the first run. They did a better job in the second one but, as our wise host says, she never really does reach 3 dimensions.