Adventures in the DC Universe 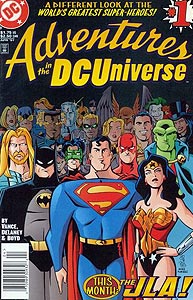 Issue Notes: A precursor to the Justice League Unlimited universe, this series was based on the style and tone of events and characters depicted in the Batman Adventures series. Though these characters and events are similar to their comic book counterparts in the familiar DC Universe, there are varied and noticeable differences.