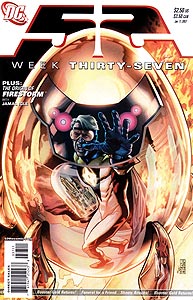 Cover Description: Booster Gold is reflected in the visor of Skeets II. Booster appears to be wearing the costume of Supernova and holding Kandor.

Brief Synopsis: Two characters thought dead within the past year return to the DC Universe.

Page 3, panel 3
"Week 37, Day 1." Supernova and Rip Hunter are trapped inside the Bottle City of Kandor as Skeets II launches an attack against the city in order to recover them. Supernova prepares to abandon his secret identity to confront Skeets outside the bottle. Enlarging himself to full size (apparently in the same visual manner as Atom II), Supernova is revealed to be...

Page 4, panel 1
SPOILER WARNING!: ...Booster Gold! Booster was last seen in 52 Week Fifteen, where he was seemingly destroyed in the explosion of a nuclear submarine over Metropolis. Booster soon reveals that he had been Supernova for 12 weeks prior to the supposed death of Booster Gold, meaning that Supernova first became active behind the scenes during the events of 52 Week Three, although he would not appear on-panel until 52 Week Eight. Reveal

Page 7, panel 4
POWER UP: According to Booster Gold, Supernova's ability to change size to enter Kandor was granted by the belt and gloves of the Atom II which were stolen from JLA storage. Supernova would also have been responsible for the theft of Luthor's Kryptonite gauntlet from the Batcave, the Cosmic Rod of Starman VII, the Dimensionmeter from the Shadow Thief, and Nth Metal from Hawkgirl II (as revealed in the next panel). It is ironic that like Supernova, Booster himself began his career as a super hero after stealing a number of powerful gadgets used by other heroes from the Space Museum of the 25th century.

Page 8, panel 3
Presumably this battle between Booster and Skeets II occurs inside Superman's "leveled and abandoned" Fortress of Solitude. In fact, Superman did lose a headquarters during the "For Tomorrow" storyline (drawn by Jim Lee, written by Mark Waid) preceding Infinite Crisis. That Fortress was supposedly in the Andes mountain of South America. However, the giant key shown in this panel (and Ralph Dibny's comment in 52 Week Thirty-One about the "keys" to the secret identity of Supernova) would seem to indicate that the Fortress of Solitude here is the Antarctic Earth-Two Fortress used by the Superman of Earth-Two who died during the Infinite Crisis. Since this is the first appearance of the Fortress of Solitude on the New Earth formed after the Infinite Crisis, it is possible that in the reorganized history of the DC Universe, the Antarctic Fortress was the only Fortress. (If you like, blame a "Superboy punch" for changing this detail of the DC Universe.)

Boosterrific Review: The truth about Supernova revealed! Booster Gold is returned! As is rarely the case in these large events, when the revelation is provided and the story of Supernova/Booster Gold moves into its third and final act, almost everything makes sense. What isn't explained immediately is allowed to dangle provocatively for future issues. (Why is Skeets evil? What does Hunter know?) The writers have earned enough good will through their exceptional storytelling to get us to trust that the lingering questions will eventually be resolved, and just enough is left unanswered that we will indeed look forward to that eventual resolution.