Walking a Mile in His Goggles, Part 4

The fourth of 5 parts continuing my interview with Booster Gold cosplayer Nicole (Demyrie). 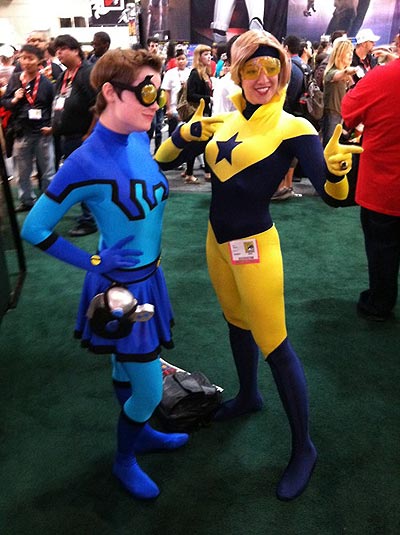 BOOSTERRIFIC: How do your family/friends react to you as Booster [or cosplaying in general]?

NICOLE: My family looks on in confusion and awe at what I do, haha! They don't always understand my choice in characters, but my favorite moment was when my elder brother looked at some professional-level photos of my Blue and Gold cosplay and nearly whispered, "Wow, Nicko. You're a real superhero!" It was precious and made me feel like a million bucks (which might be underselling it for Mr. Gold, but I'll take it!). I can count on fellow fans to fudge lines and recognize characters and take joy in cosplay, but to have a complete non-comic-fan be sucked in by the image that I had presented was way, way cool.

NICOLE: I've met so many awesome people as Booster! Each Comic Con I've literally been found by wonderful creators who are either involved in the production of the current canon (Andrew Kreisberg and Dan Jurgens this year, wow!) or have a long history with the character, personal or professional. They are all as sweet as anything and seem to really dig my interpretation, all chuckling (politely, I would think) when I offer to sign THEIR books. I've actually gotten pictures with them! I feel incredibly lucky. As for how they find me, I'll never know, but I'd like to think that it's because I'm brightly colored and not because I'm really, really loud. Right?

Really, Booster is just a character that makes for memorable interactions because his JLI self is so boisterous and ridiculous and endlessly self-entitled, and having a Beetle to play off of just makes it better. In reality, I'm not nearly as egotistic as Booster, but I do become very, very humble after an afternoon of playing him! It's pretty exhausting, but every moment is memorable when we're in the groove. I make sure to take time and talk with people, joking it up until I get a laugh. That's the performance part; that's what I make the suit for.

Sometimes just making fans' days is my MO when I struggle into the suit in the morning, which seems a little altruistic for our favorite cash-monger, but it's my meta-take on the character and I love every second of it!

Thank you, Nicole. Follow these links to parts 1, 2, and 3 of this interview. Since there will be no post on Monday for Labor Day, come back on Tuesday for the conclusion to this interview.