“Would It Be Okay With The Management If We Check Out Early?” 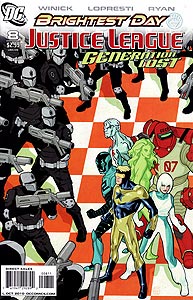 Cover Description: On the standard cover, Blue Beetle, Booster Gold, Captain Atom, Fire, Ice, and Rocket Red are surrounded by Checkmate. Booster Gold does not appear on the 1:10 variant cover. An alternate cover showcasing Booster Gold and the new Justice League International by Tony Harris appeared in solicitations by DC Comics for this issue, but that cover was not used and remains unpublished.

Page 2, panel 4
Booster Gold immediately takes charge of the situation. It may seem unnatural, but team leader is not a new role for Booster. He once capably headed the original Conglomerate for several months.

Page 4, panel 2
If Fire has been so concerned about maintaining her disguise, why has she let her green hair escape her helmet? Green is not a natural hair color, so you would expect someone to notice, especially since she was a recent Checkmate operative herself.

Page 6, panel 3
Because Ice is freezing the floor behind her back, Checkmate doesn't notice as it expands under their feet? Does the Taleb Beni Khalid-Isr have to concentrate so hard on counting to three that he doesn't feel the temperature change or see the ice particle forming?

Page 7, panel 1
What just happened to the coloring on Rocket Red's backpack? On every other panel in this issue, it is white. But as soon as he starts spouting Communist propaganda, it turns red. Maybe there was something to the infamous Red Scare of the Cold War era.

Page 12, panel 1
Oh, you're not fooling me. This was just an excuse for a cheesecake pose, Lopresti. I'm not complaining. I'm just... pointing it out. Note that in the background, Skeets appears to be shocked! (I can just hear him exclaiming, "Oh, my star!")

Page 13, panel 5
"Hey, Rube" is a jargon phrase for carnival workers calling for help against outside forces, typically carnival goers angered upon discovering the deceitful practices of sideshow workers. "Fat Man" was the nickname of the second atomic bomb dropped by the United States widely credited with ending the Second World War. Both codes are particularly well suited to their use in this issue.

Page 15, panel 1
"Fat Man" is revealed to be Captain Atom, whose arrival is accompanied by heightened radiation levels. Atom is capable of controlling all forms of energy, so this energy level is presumably a smoke screen to aid in evacuation.

Page 17, panel 5
FIRST APPEARANCE: This is the first appearance of the Potsdam, Germany embassy of the Justice League International. At the time of the League's founding, Potsdam was located in East Germany under Soviet control.

Page 19, panel 4
In fact, no one knows what the phrase "right as rain" originally meant. But most etymologists agree that the phrase thrives thanks to its alliteration, or in other words, the pleasant sounding repetition of initial consonants.

Boosterrific Review: All of the flaws I found with this issue are minor nitpicks except for one: this issue is too short. In this action-packed, emotional roller-coaster issue, the team develops some great chemistry in their rush from one cliffhanger moment to the next. This is Winick's first issue without Giffen's aid, and any fear that I may have had has proven groundless. Even Hi-Fi's colors, which I frequently find garish, were enjoyable in this comic book. A reader could only hope that the following issues in this series could be so much fun.

(5 votes)
BoosterPowershot (Oct. 22, 2010, 00:55:00)
By this point, I've been wishing Brightest Day didn't exist, and instead THIS series was a weekly. A great issue, and things really heat up! This really makes me clamor for a JLI monthly with these characters once this series is over.
KMD (Sep. 2, 2010, 09:11:29)
A very good issue--and one that really was able to show character development while not undermining or slowing down the plot.
Superman (Aug. 27, 2010, 07:32:02)
Excellent characterization, great action and the best story I've read this month: This is THE best book out there right now. And they are really a team now, even in spite of Ice wanting out of it. Makes me wonder what the higher-ups in DC have in planned for the JLI after Generation Lost.
tiggerpete (Aug. 27, 2010, 04:44:58)
I'm loving this series, its a welcome alternative to James Robinson's JLA, and in addition to Booster being leaderly and respectable, and the twist ending that I can't wait to see resolved next issue, my favorite part of this issue and the series as a whole is Rocket Red, he is by far the best new character I've read in years (I guess Jaime is the last "great" new character I've read) just the absurdity of spouting communist propaganda in Checkmate to the Black King while he, flabbergasted, exclaims that China had an office in Checkmate itself. I wonder how things would have gone if August General-In-Iron were there (he is from China, and a Communist as well) would have made for even more craziness, but I'm not sure if he is still at Checkmate or not. Either way, Rocket Red is awesome.
Erin (Aug. 26, 2010, 16:35:41)
A lot of fun to read. Although things go from bad to worse Booster kept in control and as Ice pointed out was the only one in the group that didn't outwardly reveal his ID. Some more subtle development are done with Captain Atoms' opinion of Gavril and Fires' growing awareness of Boosters' maturity. Another solid read with another killer cliffhanger that makes me wish this was a weekly series.