Brief Synopsis: The Freedom Fighters are tricked into fighting the Justice League.

This story has been reprinted in:
Justice League Unlimited: The Ties That Bind (2008)

Page 10, panel 1
When the Justice League and the Freedom Fighters square off (in this contrived story that exists only to justify the inevitable hero-vs-hero combat cliche), Booster Gold is paired against Black Condor.

Page 12, panel 4
Once upon a time, Green Lantern's ring was weak against the color yellow. Clearly the Green Lantern of the DC Animated Universe doesn't suffer this weakness.

Page 13, panel 4
Like all the Freedom Fighters, Black Condor was a character originally published by Quality Comics in the 1940s before being bought out by DC and absorbed into DC continuity. Black Condor can fly, fire ray beams from his gun, and is an Olympic level athlete. Sound like anyone else we know?

Page 14, panel 1
Booster is more than a match for Black Condor, so the Ray has to get involved. This Ray is the father of the modern DC Justice League member Ray (perhaps we should call them Ray, Sr. and Ray, Jr.).

Page 14, panel 3
When Booster needs a hand, Superman steps in. Superman trumps any Ray any day of the week. 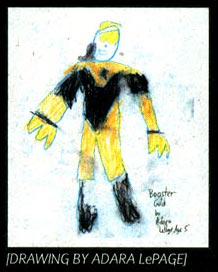