Cover Description: Fire stands behind Booster Gold, and Blue Beetle is cradled in Ice's arms as all four stare in horror at the reader.

Issue Summary: Booster Gold grows frustrated with his friend Ted Kord and their treatment as jokes by his fellow Justice League members. After another lecture by the Martian Manhunter, Booster storms out to investigate his "options," refusing to complete his ongoing punishment for stealing United Nations funds to open Club JLI.

Elsewhere, previously unknown threats to the League are developing both in space, where Despero vows revenge, and in the streets of New York, where reporter Wally Tortolini digs through the Embassy garbage in search of Justice League secrets.

Investigating noises in the street, Guy Gardner unintentionally lets a one-eyed yellow alley cat into the Embassy. The cat wanders through the house, triggering a disproportionately violent response from Fire and Gardner before it is caught and transported away via the Justice League teleporter.

Booster returns from a business meeting with Claire Montgomery only to have Maxwell Lord tell him that he will have to clean up the mess made by Gardner. Angered by the new punishment and unaware that Lord was only joking, Booster quits the Justice League.

Issue Notes: This is the first comic book in which Booster Gold plays a major role, appearing on over 1/3 of the pages, but never appears in costume.

Story Notes: This story, "Furballs," is continued as "Furballs Part II" in Justice League Europe #13, published the same month. Booster Gold does not appear in that issue.

Page 2, panel 1
Booster Gold and Blue Beetle continue their punishment for the Club JLI fiasco in Justice League America #34 and #35 by washing dishes in the New York Embassy of the Justice League. Beetle makes a reference to Hazel, a 1960s television sitcom featuring the housekeeper as the title character.

Page 2, panel 5
Booster compares Martian Manhunter to Captain Bligh, an eighteenth century British naval officer famous for a mutiny against him on the HMS Bounty. Clearly the allusion that Booster is making is that he is a mutinous soldier under Martian Manhunter's command.

Page 3, panel 2
As Booster complains about the situation to Martian Manhunter, he reveals that two weeks have passed since the conclusion of Justice League America #35. 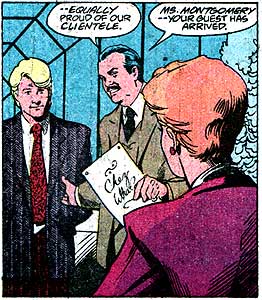 Page 12, panel 4
FIRST APPEARANCE: First appearance of Claire Montgomery. Claire and Booster are having a business dinner at Chez What? The name of the restaurant is a pun on the question, "say what?" Booster and Claire have met to discuss a business opportunity that will play a major role in Booster's future.

Page 15, panel 1
First on-panel appearance of the yellow cat, the soon-to-be mascot of the Justice League Europe. The cat was first shown in a cameo appearance in Justice League America #35. Despite the image on the cover, Booster Gold does not actually meet the cat in this issue.

Boosterrific Review: After a one-issue aberration, the series returns to greatness with a return to the unique blend of humor, intrigue, action, and fantastic art that has been a hallmark of the Giffen/DeMatteis era of the Justice League. All this plus a momentous turning point in the life of Booster Gold! Surely this series has to be among the best ever.