“I Am One with This Land” 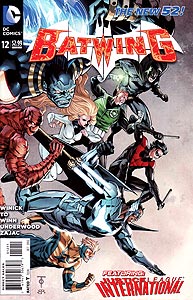 Brief Synopsis: Batwing enlists the aid of the JLI and Nightwing in his assault against the Honor Guard of Lord Battle.

Issue Summary: The Justice League International and Nightwing have joined Batwing in a battle against Lord Battle and Blood Storm.

In flashback, Batwing enlists the JLI's help in recovering nuclear weapons from Lord Battle. The group will need to split into three teams to pierce the technology scrambling satellite images of the area. Batwing knows that his manservant, Matu Ba, is being interrogated by Lord Battle within his secret compound, but is focused on recovering the stolen weapons, not his butler.

With Lord Battle in custody and Matu Ba returned home with Batwing, the mysterious King Shadow plots domination over all of Africa.

Story Notes: Given that Batwing leaves the JLI in Justice League International #12, this adventure probably takes place before the events of that issue.

Page 1, panel 2
The Justice League International is in action against Blood Storm, the Honor Guard for Lord Battle, warlord and leader of the African nation of Tundi. Specifically, Booster Gold and August General in Iron are locked in combat against Neith, the Goddess of War. While there is no country in Africa named Tundi, there is a city with that name in the Republic of Ghana.

Page 5, panel 5
Ten hours earlier, the Justice League International (August General in Iron, Batman, Batwing, Booster Gold, Godiva, Guy Gardner, and OMAC) hare seen in a meeting with Nightwing in The Haven, Batwing's headquarters in Tinasha, Democratic Republic of Congo. The JLI have been summoned by Batwing to help stage an invasion of Tundi in order to prevent Lord Battle from detonating a nuclear bomb in Nigeria.

Page 6, panel 3
Despite his team's recent "expulsion as a United Nations Security Force," Booster Gold is in favor of attacking Lord Battle. (Whether Booster remembers it or not, he and a previous JLI were involved in mulitple unsanctioned attacks on sovereign soil against the Middle Eastern nation of Bialya in the 1980s.)

Page 7, panel 5
In order to bypass Lord Battle's security, Booster Gold and OMAC take to the sewers of Tundi...

Page 11, panel 1
...Where they are ambushed by Blood Storm members Nehi and the Sniper. The events and outcome of this battle are unseen, as two pages later... 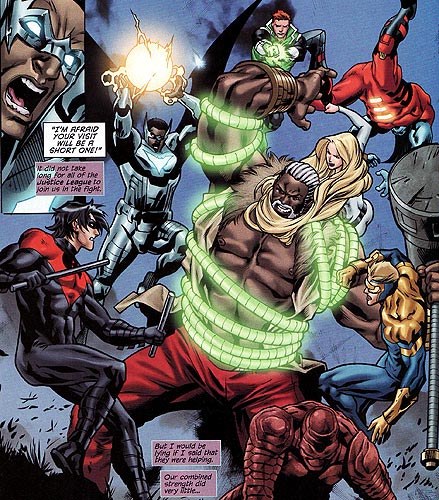 Page 13, panel 2
...Booster Gold and OMAC join the rest of the JLI and Nightwing in combat against Lord Battle outside in the jungle. How did Booster and OMAC get outside? What happened to the Sniper, who was first seen in combat against Godiva and Nightwing on page 1 and isn't seen again in the issue? At least after Batwing and Lord Battle take the battle to the sky...

Page 18, panel 1
...Nehi is seen to be loosing her strength in the Western Jungle of Tundi. Beside Nehi is Fallen, another member of Blood Storm, last seen attacking Godiva, Green Lantern, and Nightwing above ground in the metropolitan Tundi. How did Fallen get from the city to the jungle? A lot happens in this book that isn't shown to the reader. To be fair, this is Batwing's book, but even his battles aren't shown in any detail.

Boosterrific Review: This book reads like the last act of a television action-adventure yarn aimed at children. The heroes muster their full resources, fight the villains who in the previous act had been established as a heavyweight threat, and then win thanks to their ingenuity and integrity. Just like a low-budget television show, nothing is really shown. It's a way to pass the time, but hardly an enriching experience.