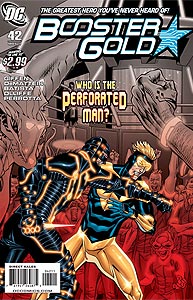 Cover Description: Booster Gold is engaged in a knife fight in prison with the Perforated Man.

Brief Synopsis: Booster Gold recounts his life in prison with the Perforated Man.

Page 3, panel 1
A PAIR OF DOCS?: Picking up where the previous issue left off, Booster Gold (in his civilian identity of Michael Jon Carter) is introduced to his new prison cellmate, the Perforated Man.

Page 6, panel 3
Booster Gold is under the impression that he has been transported 150-million years into the past in the path of "stampeding Apatosauruses." The Apatosaurus roamed the Earth exclusively during the late Jurassic Period (155-145 million years ago), which may be how Booster is able to so quickly estimate the appropriate era.

Page 10, panel 3
Despite Booster's recent experience, the prison guards did not notice Booster and the Perforated Man leave their cell. Does this mean that Booster never traveled back in time, or that the returned microseconds after he left? The trip must be in Booster's mind if the cells are monitored constantly as the guard suggests. Even if Booster returned immediately after he left, he would have changed positions: a fact that would appear as instant teleportation on a monitored system instead of the start of a fight as suggested by Guard O'Brien.

Page 15, panel 2
SPOILER WARNING!: The Perforated Man claims to be suffering from "Chronal Leprosy," a temporal disease with an outward appearance of skin lesions, much like traditional leprosy (also known as Hansen's Disease for the man who discovered the bacteria that caused it). The word "leprosy" is derived from ancient Greek for the most obvious symptoms of the disease: peeling skin lesions. If the Perforated Man is truly diseased, what is he doing in a common prison? Reveal

Page 17, panel 1
SPOILER WARNING!: It seems that Booster Gold has to be present in prison in order to meet the Perforated Man and deal with Dr. Nishtikeit's infectious agent. This revelation would appear to bode poorly for Booster Gold except for the fact that this entire story is being told in flashback from the future by Booster Gold. (Did Rip Hunter know that Booster Gold would be infected by Nishtikeit before Nishtikeit ever attacked Hunter's lab? Hunter tazered Booster in issue #40, before Nishtikeit attacked the lab! Was that to keep Booster around for the attack so that he would end up infected?) Reveal

Boosterrific Review: Haven't I read this before? This issue seems derivative of previous issues in this series: from the time in prison to the bizarre time-travel adventures to multiple Booster Golds. Writer J.M. DeMatteis had previously hinted that he and co-author Keith Giffen had paradigm-shifting plans for this story that were denied by DC Comics. That denial and Dan Jurgens' impending return to title may be what resulted in this recycled story, but it's a shame that Giffen/DeMatteis couldn't go out on a better story.

(3 votes)
KMD (Mar. 17, 2011, 15:26:41)
While KG and JMD...hmm never noticed they were close to my initials till now...got better as the series went on but I have to say I am happy to see Jurgens back. Not a bad issue by any means but not quite a home run. Starting the comic at the end of the story and relying on flashbacks did not seem to work here.
Eric Matthews (Mar. 11, 2011, 16:35:51)
I enjoyed the issue, it wasn't perfect, I agree. Yes, the idea of an "older" Booster Gold has been seen a lot in the past few years, but I still think this is unique. I really liked the second to last page, with the double spread. Thought it was good, with good narrative as well.
Harry (Mar. 10, 2011, 03:16:19)
I liked reading this issue quite a bit. It wasn't earth shattering or surprising, but I had empathy for the Perforated Man and am curious as to how it will end. A good ending could make this a solid final arc for KG and JMD.