According to Rich Johnson of Bleeding Cool, it was announced at the August 26th Fan Expo Canada "Flashpoint Friday" panel that Booster Gold will be the Canadian member of the upcoming Justice League International.

Let that sink in. A Canadian. Because the first things that come to mind when you think Canada is "selfishness" and "self-promotion." 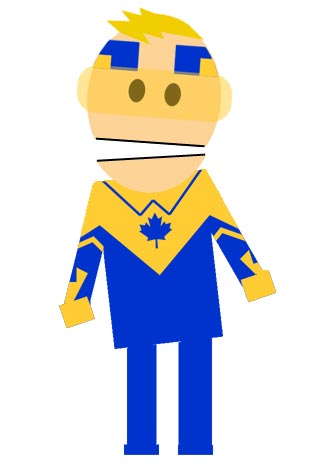 Does this change anything significant about Booster's character? No, not really. It's just a little weird to think that Booster Gold, the Capitalist Crusader, will be Canadian in the DCnU, eh.

It's hard to believe that this wasn't just panelists Brian Azzarello, Eddie Berganza, Andy Kubert, Francis Manapul, and James Robinson playing up to the local crowd. We'll find out the truth soon enough: Justice League International #1 is less than 2 weeks away.

UPDATE 08/29/11: Jobu popped into the Boosterrific Forum to note the following.

One of the panelists (I was far back) replied "actually, I think you guys will be thrilled to know that in the DCnU one of heroes will now be Canadian". They batted around "can we tell them?" for a bit and then said it was Booster Gold. The crowd cheered and clapped, but I just assumed it was joke and nothing more.

The next day at the New 52 panel, I was rocking my Booster Gold fan club T-shirt when a question came up about the JLI and Dan DiDio once again said Booster would be Canadian. He said it with a totally straight face and wasn't playing for applause so maybe there's some truth to this rumour?

So they're serious then? Of all the characters to make Canadian... Booster Gold, a hero disgraced playing college football, named by Ronald Reagan, who wears a star on his chest? Thanks for the update, Jobu.

Jesse posted on Aug. 29, 2011 at 8:06 PM
Booster is about as Canadian as Rock n' Roll or a Budweiser from 1955. The only way Michael Jon Carter is Canadian is if Canada invaded the U.S. sometime before the 25th century and nothing I've seen has ever shown that even in the 30th century.

Jobu posted on Aug. 30, 2011 at 9:58 AM
I must say I'm conflicted. At first I was thrilled because I've been waiting a long time for DC to FINALLY give Canada a hero and then BAM, my favourite of all time is chosen.

But then the more I think about it, the more I realize it doesn't really make sense for his character. Maybe the new DC is just skipping over Booster's self-promotion phase and starting him as a post-52 selfless hero; and perhaps the reason he never gets taken seriously is because he's Canadian rather then a former glory hog?

Too bad Ted Kord looks like he's get the vanishing treatment, I feel like he would have made a good token canuck.


Russ Burlingame posted on Aug. 30, 2011 at 10:31 AM
Someone ought to write a story where both Booster AND Ted are Canadian, and it's a play on Bob and Doug McKenzie.

Reed Solomon posted on Aug. 30, 2011 at 7:13 PM
For some reason I vaguely remember that Metropolis/New Gotham become such huge megacities in the future that they incorporate Parts of Toronto and Montreal. Maybe I'm just remembering something wrong from Boosters original series or somewhere.

But it could be something as simple as Booster having dual citizenship. It's not that uncommon.