At long last, all / most / almost all of our questions will / could / should be answered into today's Heroes in Crisis #8!

io9.com has the issue preview, which seems to imply that.... No. I won't spoil it.

Buy this issue and make Skeets happy! (*Somebody* needs to be happy.)

Funny how I bought Injustice, despite the kick in the heart of Ted's demise in there, while I couldn't get myself to pay for this trash fire despite him being alive and kicking there.
Maybe if I could micro-buy by the panel, I'd pointedly get only the Blue & Gold bits, haha

Boosterrific [Official Comment] posted on Apr. 26, 2019 at 9:35 PM
I don't blame you at all, I. INJUSTICE was dark, but at least the characters were consistent with established characterization. King's take on Booster, Harley, et al appears to have been created whole cloth. (The best part of HIC is indisputably the art. Comic books have never looked so good yet been so unsatisfying to read. )

Sloan posted on Apr. 28, 2019 at 6:21 AM
This issue was awful. All the tension in Booster and Batman investigating what happend gone when they decided to put Wally in front of a camera like a bad youtuber to explain what happend. The exposition was boring and weak, and the logic was nonsensical.
I get that Wally was the Fastest Man Alive but computers (even Kryptonian) dont go work like that. Not to mention that he "took Booster time travel technology" (didnt he needed a Time Sphere?), in the same continuity where time travel is impossible.

Last week's announcement about Henry Cavill's departure from future DC Comics movies sent a lot of websites scrambling to re-report what we all thought we knew about Warner Bros' big screen plans.

Some of those sites, like DenOfGeek.com (which ran an updated repost) had Greg Berlanti's Booster Gold on their list, whereas io9.com added our hero as an editorial afterthought, and Movieweb.com ignored Booster altogether.

Of course, it *has* been a long time since we've gotten any real update on the progress of that venture. Last month, screenwriter Zack Stentz seemed to imply it was dead (or at least his involvement in it is). So let's test the mood of Booster Gold fandom on this.

This week's poll question: Are you still expecting Warner Bros to release a live-action Booster Gold movie? Please visit the Boosterrific Polls page to view results for this week's poll.

Boosterrific [Official Comment] posted on Sep. 17, 2018 at 6:18 PM
I'm sure there are a lot of Catwoman, Steel, John Constantine, and Hal Jordan fans who agree with you. Frankly, DC's live-action misses have far outnumbered their hits.

Bob Rossetto posted on Sep. 17, 2018 at 9:24 PM
Boosterrific-did you get DC all access? and if so what do you think of it?
I got it and it only has 12 issues of Booster Golds 45 issue second run. It has none of the first run. And none of Rip Hunters -Time Masters. I am curious to know your thoughts.

Diego Segovia posted on Sep. 20, 2018 at 5:03 AM
I think the secret project Kevin Smith is working on is a Booster Gold and Blue Beetle series for the DC streaming service. Wether it be live action or animated.

What Morgenstern Learned at Comic Con 2015

Morgenstern did what I could not: he found a picture of a Booster Gold cosplayer at Sand Diego Comic Con International 2015: 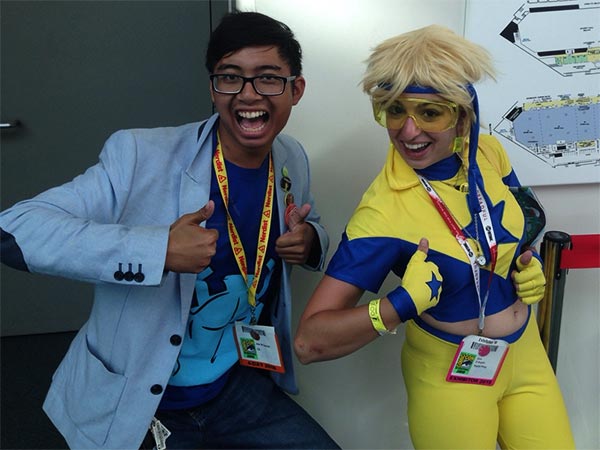 The pic comes to us by way of ProfessorWhat.tumblr.com under the label "Apparently the only Blue Beetle and Booster Gold at SDCC."

Before we leave the subject of Comic-Con for another year, I should mention that there was one additional Booster Gold reference made by a comics professional at the con. When io9.com's Cheryl Eddy asked Harley Quinn artist Chad Hardin who he'd like to get his hands on in the DC Universe, Hardin said this:

"I'd love Guy Gardner and Booster Gold, that whole trio of troublemakers from JLA in the 1980s. I think that'd be a lot of fun."

By trio, he must mean to include Blue Beetle. I think that'd be a lot of fun, too.

Thanks to Morgenstern for finding that cosplay pic.

Over the weekend, ObservationDeck.io9 asked its readers "What's Your Secret Comic Collection Shame?" I mention that post here mainly because the author, Wenchette, credited a Booster Gold fan for the idea. We all know Booster Gold fans have no shame! 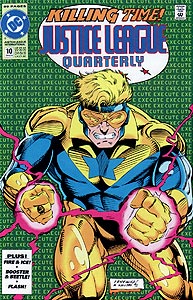 Although the mid-90s weren't a good time for anybody.

(Some may feel it's shameful, but I've always been up front about my inexplicable affinity for Extreme Justice. If I have any regrets, it's the comics I traded away long ago. I think I'd like to have all my early 80s Marvel G.I. Joes back now, please.)

Thanks to the Boosterrific Forum's latest member, MetalWoman, for giving us a head's up about the 5-page preview (1/4 of the total issue!) for Justice League International #9 posted last week at io9.com. Two things to take away from this preview:

Justice League International #9 will go on sale this Wednesday, May 2.

The Irredeemable Shag posted on Apr. 30, 2012 at 10:46 PM
Ahem... notice the title of the issue? Oh wait, I didn't mean to be insensitive. I'm sure Booster will get a chance to headline an issue title in his own book someday. :)

Eyz posted on May. 1, 2012 at 8:09 AM
I'm not noticing another fact (new change!):
5. Booster Gold coming from the future isn't public knowledge anymore, or at least not everyone knows it/is sure it is true.

Boosterrific [Official Comment] posted on May. 1, 2012 at 2:28 PM
I found the first the first issue of JUSTICE LEAGUE so offensive, I haven't read any since. I won't give it another look until Johns and Lee are off the book.

Morgenstern posted on May. 1, 2012 at 2:33 PM
In some of the recent issues Batman suppossedely called the JLI a bad joke that needs to be stopped.

Boosterrific [Official Comment] posted on May. 1, 2012 at 4:40 PM
Siskoid of the Blog of Geekery posted the panel from JUSTICE LEAGUE 7 that has Batman telling Steve Trevor to "shut down that joke calling itself the Justice League International." (Find the image at Siskoid's post: http://siskoid.blogspot.com/2012/04/geoff-johns-doesnt-want-you-to-read.html

The issue was written by Geoff Johns, who as DC Chief Creative Officer really should have a better idea of how Jurgens is writing Batman in JLI.

deusex2 posted on May. 2, 2012 at 3:09 PM
Well, the whole point of early JL in DCnU is that they are posing as Superfriends for the whole world, but in practice, they can't stand each other's guts... And others too, for that matter.

I know how you feel about current JL, so do I, but a friend of mine is giving it a very active benefit of a doubt, despite all of my warnings.

He even forced me to read JL part where Phantom Stranger confronts a familiar figure. That bit infected me with the optimism as well...Right until next issue.

Boosterrific [Official Comment] posted on May. 2, 2012 at 3:33 PM
I don't know why anyone at DC Comics would think I would want to read a Superfriends comic where the "heroes" hate one another. I find the concept disgusting. (I can't say that I am pleased that there are adults who would pay good money for stories about animosity-riddled Supermen. Proof, as if any was needed, that there is no accounting for bad taste.)