Now that the final chapter of Heroes in Crisis has been written, I'm of the general impression that the less said about it, the better.

(Right now, I never want to read a DC comic book again. Maybe by Monday, I'll be in a better mood.)

While I'm recovering from my own personal trauma, enjoy this delightful sketch of Bing Crosby and Bob Hope as Booster Gold and Blue Beetle drawn by Joe Phillips in the style of Al Hirschfeld tweeted by @DrPopCultureBG. 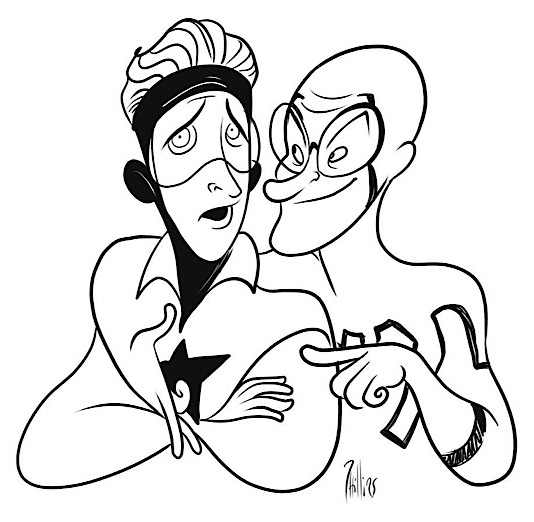 Sigh. I still love you, high collar. (And I'm tickled pink by the thought of Booster wearing one of Bing's rugs.)

Hope Only Floats So Long

Booster Gold fans are less optimistic than I expected.

I can't say as I blame you. Warner Bros certainly doesn't seem to know what they're doing, and that makes it awfully hard to have faith that they'll do our hero justice.

Those of you who have lost faith may enjoy reading the somewhat rambling opinion piece "The DC Extended Universe needs to die" at Destructoid.com. I did.

All Our Hopes Are Pinned upon You

So maybe you heard about this movie that came out last week? Wonder Woman, I think it's called? People seem to like it.

But seriously folks, I'm sure most of you know by now that Wonder Woman made over $100 million domestically (and significantly more than that internationally) in its opening weekend after being praised by critics and fans alike. Congratulations to DC and Warner Bros. for finally getting one right.

I'm not the only one happy to see Wonder Woman doing so well. Check out these tweets from screenwriter Zack Stentz: 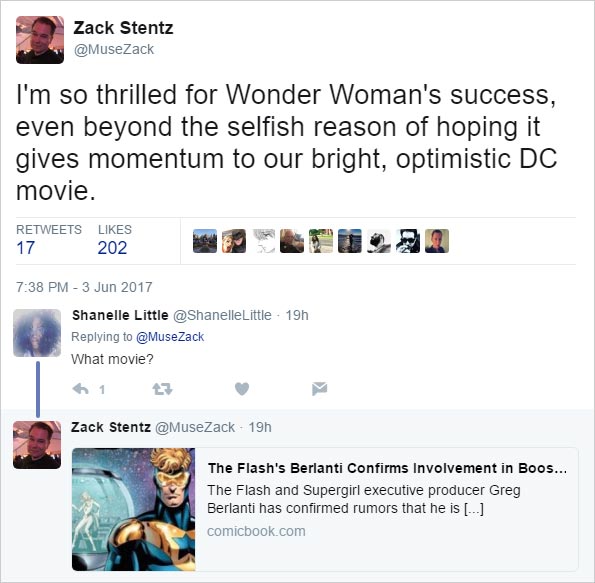 "Bright" and "optimistic" are two of the most important words I want associated with any Booster Gold production! Thank you, Zack.

Wonder Woman's success doesn't guarantee anything (except a sequel for Wonder Woman), but it can't hurt the chance that we'll be seeing Booster Gold: The Movie done right.

A month into Rebirth, most Booster Gold fans see it as a positive (even though there has been no hint of a Booster Gold appearance coming any time soon).

Last week's poll question: How satisfied are you with Rebirth so far? (58 votes)

I was feeling that way, too, until I read this week's Superman #1. No spoilers, but it's got a Geoff Johns' Superboy Prime vibe plus an "everything you think you know is a lie" moment that I really didn't care for. If this is the flagship title of the new Rebirth event, it feels like more of the same old DCnU to me.

I hate to judge a title (much less a whole universe) on one issue, so here's hoping my first impression was wrong.

(And whatever I think about the other Rebirth books, I've still got Dan Jurgens writing Action. Jurgens' Superman is still my Superman, no matter what else is happening in the wider DCnU.)

Mina posted on Jun. 18, 2016 at 3:14 PM
So far, I'm liking the Flash offerings, and Titans, but that's about it. Everything else has been mostly lackluster.

I Hope You Enjoyed Bat-Mite

Did you pick up the Bat-Mite trade on Wednesday? If not, what are you saving your money for? It certainly isn't for Booster Gold comics, because DC isn't making those.

May solicitations were revealed earlier this week. If you read the previous paragraph, you can guess what that means: no new Gold in sight.

While Booster doesn't look to be having any new adventures in May, he will be returning in reprints of some of our old favorites. DC will be re-releasing trades of 52 Book One and Superman: Panic in the Sky, both collecting comics published about 10 or 24 years ago, respectively.

Maybe DC has a point. Why should they work on making new Booster Gold comics when they already have a back catalog of great stories to sell to today's kids too young to remember the good old days? Kids still read comics, right?

You can find the whole list of DC's solicitations at Newsarama.com.