The History of Blue and Gold, Part 3

As all Booster boosters know by now, DC has announced a new Blue Beetle/Booster Gold mini-series coming in July 2021. What you may not know is just how long it has taken to get to this blessed event. What follows is the third in a series of three posts that originally appeared here on Boosterrific in June 2011:

After reading an interview in 1988's Direct Currents #8 with Dan Jurgens and searching through the letter columns in early-1990s Justice League America comics (part 1 and part 2 of this series, respectively), I decided that it was time to go straight to the original source and ask Dan Jurgens about the fate of The Blue and the Gold series that he was once so excited about.

BOOSTERRIFIC: Looking back, I came across a copy of DC's DIRECT CURRENTS promotional flier which featured an interview with you in it's "People at Work" segment (DIRECT CURRENTS #8, August 1988). In that interview -- interviewer unknown, though Paul Kupperberg gets writing credit -- largely promoting your work on FLASH GORDON), you mentioned an upcoming project:

"And, of course, the one project I'm really excited about is something that DC's still got in the planning stages, called THE BLUE AND THE GOLD, a new series starring Booster Gold with the Blue Beetle. They've gotten real popular as buddies in Justice League International, so I think a book co-starring the two of them is a natural. It's going to have that unique JLI flavor to it."

Clearly that book never materialized. Do you remember anything about this planned series, such as how far into development it might have gotten or what finally prevented its publication?

DAN JURGENS: Yes, that was definitely on the board a couple of different times. There were, I think, three different times when we were just about to start working on it and then something would come up that prevented us from doing so. Generally, I think it was my overall workload, or an idea to hold it off for another event or something like that. I think there were even some points where we were going to try to tie in with a specific JL event, and then I got too busy to do so.

It's odd, because it was everyone's intention-- DC included, to actually get it done.

BOOSTERRIFIC: You state that the delays may have been cause by your workload. Was this book -- presumably an ongoing -- your idea, or did an editor at DC assign you this project? Did DC never consider handing the project off to another writer/artist?

DAN JURGENS: It's impossible for me to answer the question of what DC might have considered, but I don't remember any discussions of another creative team. We did play around with the idea of someone else writing the book-- Mike Carlin-- for awhile, which would have been a lot of fun. We probably thought of it more as a mini-series because that was a good way to introduce a book at the time.

But I was really, really busy with a lot of stuff-- and any window I had to fit it in seemed to open and close in a hurry.

BOOSTERRIFIC: During the several years where there was a possibility this thing would go to market, was any actual work -- scripts or art -- done, or did it never make it out of the planning stages?

DAN JURGENS: No scripts or art were ever done. Lots of conversations and ideas and we got as close as thinking we'd be starting in the next three or four weeks, but something always came up. I couldn't tell you what each of those events might have been, however.

Comics were like that then. In terms of planning, things were a bit more loose than they are now. We'd often have those, "let's do this!" types of conversations that would sometimes become a reality, other times not. There have been several times when I was part of a project that I truly thought would happen, but for whatever reason didn't. Or would kind of morph into something else.

BOOSTERRIFIC: I was surprised to see you mention this project in 1988. For awhile it was promoted in the letter column of the Giffen/DeMatteis JLI. You may not remember, but I would be interested to know at what point you recall this project being finally cancelled (or at least so far on the back burner that no one discussed it anymore)? Was the window of opportunity closed for this project by the time you took over as JLI scribe in 1992 (at which point you wrote/drew Booster and Beetle monthly)?

DAN JURGENS: The project wasn't ever cancelled, so much as it simply didn't happen. If there's no true, official start, you can't cancel it after all. We had the best of intentions but it just didn't materialize.

I do think that by the time I took on JLA that we sort of saw that as a Blue and Gold vehicle, especially since it was such a good opportunity to tie the book into the "Death of Superman" story.

So that's that; the story of The Blue and Gold series that almost was. Boosterrific.com offers a hearty thank you to Dan Jurgens for his time and generosity in indulging us with an interview about a comic book he never worked on... until now. 😉

The History of Blue and Gold, Part 2

As all Booster boosters know by now, DC has announced a new Blue Beetle/Booster Gold mini-series coming in July 2021. What you may not know is just how long it has taken to get to this blessed event. What follows is the second in a series of three posts that originally appeared here on Boosterrific in June 2011:

Just a few months after Dan Jurgens teased the impending release of The Blue and the Gold in August 1988's Direct Currents #8 (as posted in part 1 of this series), the news was confirmed in the Justice Log letter column of Justice League International #25 (April 1989). 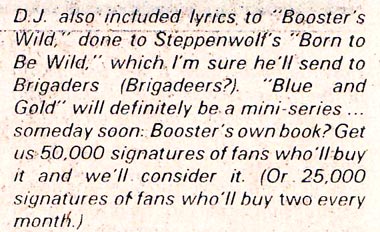 These letter column responses are presumably written by series editor, Andy Helfer, or more likely his assistant, Kevin Dooley. They should be in position to know the accuracy of the following news they printed a few months later in Justice League America #32 (November 1989).

I don't know where the news of the new publication date was was released first, but it doesn't much seem to matter. That "semi-regular" series hint seems to suggest that by this time, DC had decided that the ideas behind The Blue and the Gold series had been rolled into what eventually became Justice League Quarterly at the end of 1990. More news about The Blue and the Gold series wouldn't appear until writer/artist Dan Jurgens and editor Brian Augustyn took over the series in 1992. The news wasn't good, but at least it was honest. From Justice League America #64 (July 1992):

Jurgens was the go-to man for many of DC's major event series in the early- to mid-1990s, and his schedule was always full. Worse, just a few issues later, Booster would be powerless, and Beetle would be in his second coma, both thanks to Doomsday. Months passed before both were back in fighting condition, and this storyline seems to preclude the opportunity for a spin-off mini-series focusing on the pair. The letter column for Justice League America #71 (February 1993) seems to confirm this being the end of the road for the long-planned series. This is the last mention of The Blue and Gold in the series.

Five years after Dan Jurgens called it "the one project I'm really excited about," The Blue and the Gold looked like another missed opportunity.

Next time, we'll revisit my 2011 Q&A with Dan Jurgens about the fate of The Blue and the Gold series.

The History of Blue and Gold, Part 1

As all Booster boosters know by now, DC has announced a new Blue Beetle/Booster Gold mini-series coming in July 2021. What you may not know is just how long it has taken to get to this blessed event. On Twitter, Dan Jurgens wrote:

To be clear, this is the third, maybe even fourth time this project has been on my board, the first in '88or '89. Nice to have it become a reality and even better to have the incredible Ryan Sook drawing it. So good! (@thedanjurgens, Twitter.com, Apr 21, 2021)

I can attest that 1988 is the date that fans first learned about it. What follows is the first in a series of three posts that originally appeared here on Boosterrific in June 2011:

In Boosterrific.com's never-ending quest to catalog every Booster Gold appearance in a DC publication, I recently perused several issues of DC's pre-Previews solicitations, Direct Currents. Many of the early issues include interviews with DC artists. The artist interviewed for the "People At Work" column in issue #8 (August, 1988) is Dan Jurgens.

The article -- presumably written by Paul Kupperberg -- includes a brief biography, including the facts that Jurgens was inspired to read comics by the 1966 Batman television show, and that his first work for DC on Warlord resulted from a chance meeting with Mike Grell at a comic book convention. It even contains a bit about the origin of Booster Gold. But the part I found most interesting was this paragraph:

"Then there's next year's ADVENTURES OF SUPERMAN ANNUAL, which I'm co-writing with Jerry Ordway and pencilling. And, of course, the one project I'm really excited about is something that DC's still got in the planning stages, called THE BLUE AND THE GOLD, a new series starring Booster Gold with the Blue Beetle. They've gotten real popular as buddies in Justice League International, so I think a book co-starring the two of them is a natural. It's going to have that unique JLI flavor to it."

We know it was never released, but how close did DC come to publishing The Blue and the Gold series teaming Booster Gold and Blue Beetle?

Next time, we'll look for more clues about the series that almost never was in Justice League letter columns from the 1990s.

Since we opened the week with a bit of a look back to something many Booster fans may have never seen, let's continue that theme with a peek at something else that has been around awhile but may be new to you. (Slight warning, the following may contain spoiler information if you have not yet read 52. But if you haven't yet read 52, shame on you.) 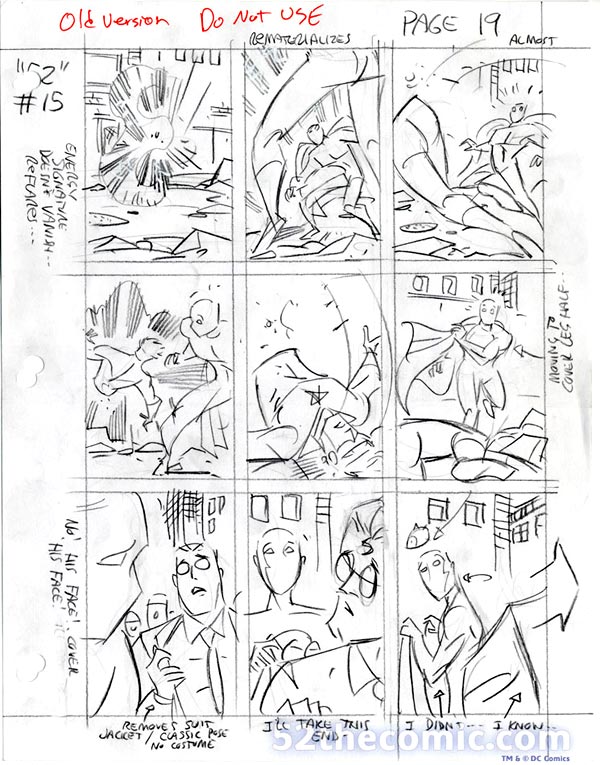 Years ago, DC posted Keith Giffen's layouts for 52 at 52thecomic.com (now archived at www.dccomics.com/sites/52/). Among those layouts are two original rough drafts for the ending of 52 Week 15, including one ending where Booster Gold is disintegrated and another ending where he was cut in half. Fortunately, neither of those things ended up happening to our dear Booster. He just died instead.