For the Independence Day holiday this year, let's celebrate this classy redesign of Blue Beetle and Booster Gold by Julalesss on DeviantArt.com.

I think they both look like something we might see on the CW, and I'm okay with that. At least there we can be sure that Booster won't be wearing his New 52 redesign. (No, I'm never going to stop beating that dead horse.)

Brady Kj posted on Jul. 10, 2017 at 1:49 AM
Ooh. These do look classy, and only subtly different from the original costumes. Thumbs up to Julalesss!

Have You Seen This Woman?

I received this email this weekend:

I know this might be a long shot, but I found one (and only one!) cosplayer doing Goldstar on the Internet, and the photos also appear on your Boosterrific website.

These photos were from back in 2011 at Emerald City Comicon.

I figure at this point maybe the cosplayer isn't using the costume anymore and might want to sell it. I am interested in repurposing it for use by an actress in my video series Heroineburgh. (http://www.heroineburgh.com)

Any information at all on who the cosplayers might be? (both the Goldstar and Booster one from that Con).

Thanks for any help you can provide!

If anyone knows anything, send a note to info@heroineburgh.com.

Booster booster Shawn Baston dropped by comments on Wednesday to say that he'd heard from a reliable source that the next time we see Booster in the comics, his appearance might be influenced by whatever designs the Booster Gold movie will be using.

Given what super hero costumes look like in most movies, that sounds to me like we can expect Booster to be moving out of tights (both his beautiful classic threads and his New 52 duds) and into some black leather akin to what we saw on Smallville or one of the CW's other DC shows.

Or maybe Booster will wear a suit of mechanical armor, 1990s style. Maybe something like this: 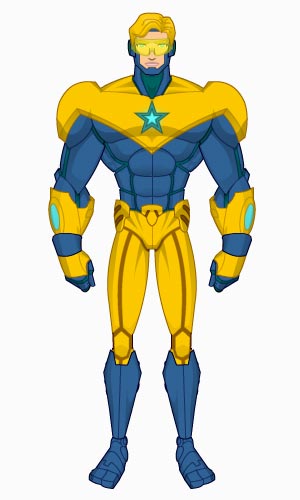 Just so we're clear, this fan art has no connection to the movie (so far as I know). It's just a piece whipped up by Brazilian artist jupirata. You can see more of jupirata's superhero redesigns on DeviantArt.com.

Dan Jurgens was at the Chicago Comic and Entertainment Expo (aka C2E2) earlier this month, and he shared with the world a couple of pictures of the Booster Gold cosplayers he met on Twitter (as @thedanjurgens).

First up is this fine fellow in an unusual, Iron Man-inspired Booster Gold costume. (It reminds me of Booster's ungainly mid-90s suits of armor, but it's still way better than the New 52 costume.) Note his Skeets in Jurens' hands.

Taking a low-tech approach to Booster Gold cosplaying is this young woman. Look closely at what she is wearing on her head:

We don't have many cold nights here in Atlanta, Georgia, but I'd still give my left arm for a Skeets knit hat!

Twenty-seventeen has been a great year for Booster Gold cosplayers so far. Keep up the good work, Booster boosters.