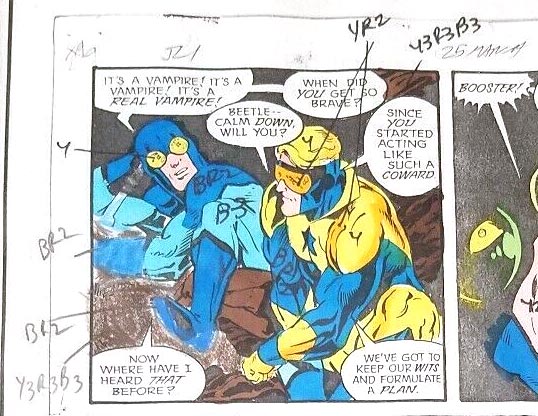 I rarely discuss original comic book artwork for sale. By which I mean work created for the purpose of publication, not fan commissions.

This isn't an oversight so much as it is the byproduct of my own ignorance about the market. As a skinflint reluctant to part with $4 to buy a modern comic, I find the much higher prices of the original art market make me absolutely squeamish.

That's not to say that I think the prices are undeserved — I consider the original artwork for the cover to Booster Gold #1 to be essentially priceless. (One day I will own an original Booster Gold piece by Dan Jurgens, perhaps in time for Booster's 50th anniversary!) However, as an outsider, I really don't feel qualified to discuss the original art market. This is a shame considering how much amazing, original comic book art is available online.

Take, for example, this piece by Dan Jurgens and Norm Rapmund on sale through pencilinkcolor.com.

Isn't that great? With the colors removed, you can really see the pen and brush techniques of the artists and get a feel for how the inks can complement the original pencils. (Pencillers get all the attention, but the influence of an inker on a finished piece cannot be understated.)

I understand why people collect this original art, especially in this modern age of electronic media. In a way, owning a piece like this is like owning a page of Leonardo da Vinci's sketchbook. It brings you closer to the medium that you love.

If you'd like to see much, much more original art, click the image above to visit ComicArtShop.com.

Jesster posted on Dec. 9, 2016 at 1:55 PM
Proud to say that I own an original page of Booster art from Vol 1, JLI, Formerly Known, and Vol 2 that I purchased directly from Dan Jurgens at Baltimore Comic Con. They are a few of my most prized posessions.

As I said two weeks ago, the first volume of Booster Gold was in many ways a re-investigation of the heroic ideal of the DC Universe. But Dan Jurgens didn't draw the line at exploring what made a hero. He also took a hard look at what made a villain.

Jurgens tended to humanize Booster's villains, giving them reasonable backstories that were filled with the same short of hardships that Booster Gold was struggling to overcome. Sometimes that resulted in characters like Broderick or Dirk Davis, but it didn't always work. No matter how much you pathos you give to a color-blind man who dresses like a prism, he's still going to look like a clown. 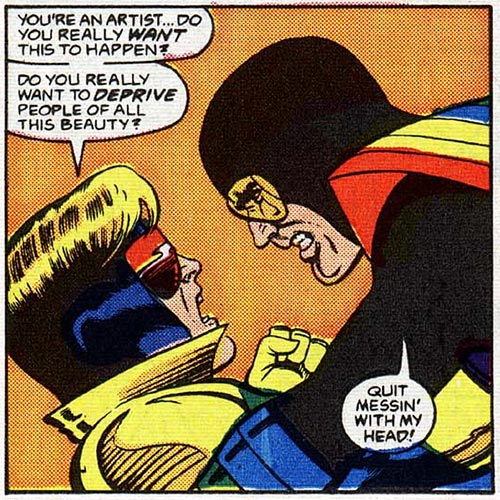 Of course I asked Jurgens what his motive was for bringing the Rainbow Raider, one of the least successful of Flash's foes, to Metropolis. Why choose him, a villain with a lackluster Silver Age-style gimmick, to feature in a two-part story against a modern anti-hero like Booster Gold?

I though it'd be fun to play off the color angle. Plus, I liked the visual of him riding his rainbow.

Not my best day.

So not everything can be Shakespeare. It's important to remember that sometimes a funny-book is just a funny book.

Despite that Rainbow Raider story, we still thank you, Mr. Jurgens.

(Reminder: no post on Monday because of the Labor Day holiday. Blogging is hard work!)

Mark Sweeney posted on Sep. 4, 2015 at 4:06 PM
Booster v. Raider was my 1st issue of BG. RR's utter dismemberment of Booster in the 1st part really skewed my young thinking that the Raider was a 'Class A' DC baddie. I later learned that this wasn't the case, but I've loved both Booster & the Raider ever since!

Boosterrific [Official Comment] posted on Sep. 7, 2015 at 3:45 AM
If I were writing comics, I would pull a Dr. Light on Rainbow Raider. You'd all be sorry for laughing at Roy G. Bivalo!