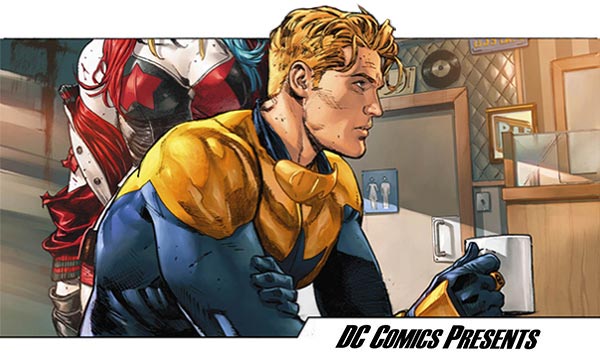 All I Do Is Complain

I've noticed that Dan Jurgens has been publicly silent about Tom King's recent reinterpretation of Booster Gold. However, Booster's creator did recently speak up about Clay Mann's pencil art for the upcoming Heroes in Crisis mini-series. 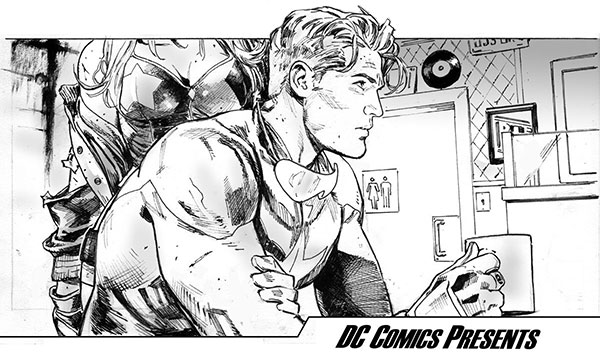 That's an endorsement of sorts.

Despite the pretty art, I'm still not any more optimistic about Heroes in Crisis than I was last week. But I'm perfectly willing to admit that I'm a hard-to-please blowhard. Maybe it's time to hold a finger to the wind and test which way public opinion is blowing on this thing.

This week's poll question: What is your reaction to the news that Tom King will be writing Booster Gold as a murder suspect in the HEROES IN CRISIS mini-series? Please visit the Boosterrific Polls page to view results for this week's poll.

Herb posted on Jun. 18, 2018 at 4:02 PM
He got the Flight ring and blasters, which are details artists forget. Sharp lines, certainly one of the better Booster artists

DC Comics announced a new comic series on Wednesday via a press release. Mainstream media sites which usually ignore comic books, such as Entertainment Weekly, The Hollywood Reporter, and Newsweek, decided the announcement was newsworthy.

What could make this series such a big deal? Perhaps because Booster Gold is invlovled.

Per the original press release at DCComics.com:

(June 13, 2018 – Burbank, CA) There’s a crisis headed toward DC’s greatest heroes, but it isn’t coming from outer space or another dimension—this time, the threat is homegrown. DC proudly presents a new seven-issue miniseries debuting in September by Tom King and his BATMAN collaborator/artist Clay Mann, titled HEROES IN CRISIS.

A former counterterrorism operations officer with the CIA, [Tom] King’s bestselling, critically acclaimed comics—including THE SHERIFF OF BABYLON, THE OMEGA MEN, BATMAN, MISTER MIRACLE—have often grappled with war and conflict, and a hero’s struggle to put their war and their trauma behind them. This new series will explore similar themes against the backdrop of a murder mystery involving Batman, Superman, Wonder Woman, Harley Quinn, Booster Gold, and the rest of the World’s Greatest Super Heroes.

But not so fast! Yesterday, Newsarama revealed what appears to be the issue's upcoming solicitation text. The solicitation casts the story in a slightly different light that might *not* be everything a Booster booster could hope for.

Per the "Heroes in Crisis" fact sheet:

There's a new kind of crisis facing the heroes of the DC Universe, ripped from the real-world headlines by C.I.A.-operative-turned-comics-writer Tom King: How does a superhero handle PTSD? Welcome to Sanctuary, an ultra-secret hospital for superheroes who've been traumatized by crime-fighting and cosmic combat. But something goes inexplicably wrong when many patients wind up dead, with two well known operators as the prime suspects: Harley Quinn and Booster Gold! It's up to the DC Trinity of Superman, Wonder Woman and Batman to investigate – but can they get the job done in the face of overwhelming opposition?

Apparently Booster Gold has a new archnemesis, and his name is Tom King.

Arrgh. Murder! Death! Kill! What kind of "community-building" story about overcoming PTSD could be built upon the death of all the patients who sought help?

Per the original solicitation for that issue:

"THE TRAVELERS" part one! Booster Gold has come to Gotham City, and he’s enlisting Batman and Catwoman to go on a time-traveling mission to rescue…Booster Gold! It seems a younger Booster Gold has gone back in time to kidnap an even younger version of himself, and to rescue his own past, Booster must pursue both of his previous incarnations through Batman’s history to find out what is going on. The start of a new story that will sow the seeds for a whole new epic to come....

As we now know, when that story was eventually published as "The Gift," it looked almost nothing like what was promoted outside the inclusion of Booster Gold and Batman. Maybe Heroes in Crisis will be something like that. Maybe Booster Gold will be the detective that solves the crime and saves the day.

Or maybe Booster will be the same as the last time we saw King write him: a short-sighted idiot who enabled a mass homicide.

My hopes are not high.

Everyone can decide for themselves if King redeems his poor treatment of Booster Gold when the first issue of Heroes in Crisis is released on September 26.

Harris posted on Jun. 15, 2018 at 8:43 AM
This story will probably be a dark one for Booster, but he could either be ruined by it (like Elongated Man in Identity Crisis) or he could come out of this better than ever and perhaps with his own solo series hopefully.

Boosterrific [Official Comment] posted on Jun. 15, 2018 at 2:47 PM
The obvious parallels to IDENTITY CRISIS are what I'm most afraid of. That series is one of my least favorite of all time. It irretrievably ruined several well-established DCU characters, all just so that it could tell a story about how dark the DCU was at its core and how unheroic its heroes could be. I don't believe that kind of story has any place at DC, and I certainly don't want to see Booster Gold involved any such affair.

Harris posted on Jun. 15, 2018 at 5:49 PM
On another note, I’d reckon that the synopsis that was provided will be the storyline for the event. I bet what happened for “The Gift” was Tom King was writing a genuine Booster Gold story (although Booster would still probably be written terribly because Tom King can’t write characters), but then editorial told him they wanted him to tie his Booster Gold story into “Heroes in Crisis”, so he changed it last minute. So I think “the Travelers” was only changed because of special circumstances.

Boosterrific [Official Comment] posted on Jun. 15, 2018 at 6:52 PM
I don't have any evidence to say that isn't true. All I can say is that they didn't give us the story they advertised.