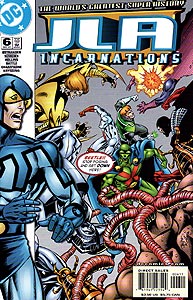 Story Notes: The events in this, the second story in the issue, most likely follow the events of Total Justice #2. This story is riddled with anachronisms, most likely because it was published five years after the period during which it was supposed to have taken place as a means to address the disbanding of the Extreme Justice team prior to the founding of the Grant Morrison written JLA title.

Page 26, panel 3
FASHION ALERT: Amazing Man II, Booster Gold, Blue Beetle II, Captain Atom, and Maxima are in combat with Bialyan-controlled, cyborg duplicates of the Extremists, including Doctor Diehard, Gorgon, Lord Havok, and Tracer. As before, Booster Gold is shown wearing his Mark IV armor, though at this time he should be wearing his Mark X "Flesh-Driver" armor.

Page 35, panel 3
The only Extreme Justice members present in the Mount Thunder headquarters when Wonder Woman arrives to deliver the news that the United Nations has "withdrawn sanctions" are Blue Beetle, Booster Gold and Maxima. Though the Justice League America and the Extreme Justice teams operated without United Nations approval, Martian Manhunter's Justice League Task Force did work with the U.N. At the United Nation's request, Manhunter urged the other branches to disband, and they all agreed.

Boosterrific Review: The two stories in this issue take place at two different points in the history of the Justice League. Each story is very entertaining, but each captures its necessary time period as inaccurately as the 1980s television show Happy Days depicts the early 1960s. The first story, "Buddies," successfully captures the characterization of the members of the early days of the Justice League International, but writer John Ostrander fails to strike the same chords as the earlier work of Keith Giffen and J.M. DeMatteis, remembered primarily for their unique humor. Not to say that this story isn't funny. It is; it just is not the same sort of funny. (More Seinfeld than Cheers.) "Authority," the second story in the issue and also by Ostrander, also fails to find an authentic vibe in a tale about the last days of Captain Atom's Extreme Justice team. This is less a fault of Ostrander, who again deserves credit for great characterization, than of artist Eric Battle, whose pencils are actually too good for an issue of Extreme Justice. As a whole, this issue is more of a nostalgia-tinged appreciation for the teams and stories of old than any attempt at period storytelling. And in this case, that's not necessarily a bad thing.