Cover Description: Zatanna, Green Lantern, Black Canary, Flash, and the Spectre assume action poses intentionally evocative of the cover of the first issue in this mini-series. (No Booster Gold.)

Story Notes: The events in this story are told through flashback of the frame story protagonist, Paul Lincoln, now a very old man. It is unclear whether this rearranged chronology is an accurate history of the DC Universe following the Infinite Crisis, or whether the anachronisms are due to the failing memory of an old man. (This final issue of the series ends intentionally vague on this point.) It is important to note that Lincoln himself has aged considerably since the events pictured herein, but the heroes have not.

This story has been reprinted in:
DC Universe: Legacies (2011) 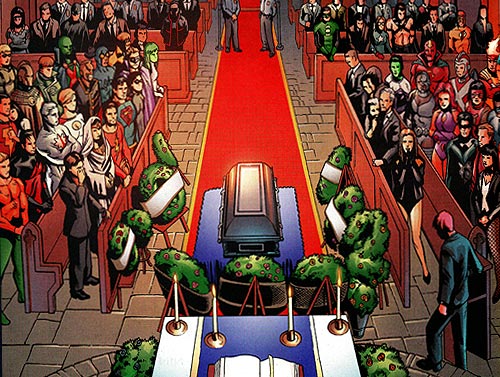 Boosterrific Review: The cliches continue in this final issue of the latest revision to the official DC history. I've been especially disappointed in this series largely because it has been so mediocre. Rather than revealing something new about the great history of DC Comics, it merely repeats events as through from memory without any apparent fact checking and without providing any new insight or added depth. Even the frame-story was derivative of past works (notably Kurt Busiek's groundbreaking Marvels). This series has been the worst kind of child's primer, lacking anything to reward longtime readers and failing to inspire a newcomer to read more by turning the grand tapestry of the DC Universe into a boring history textbook.