Batman: The Return of Bruce Wayne

“Until the End of Time” 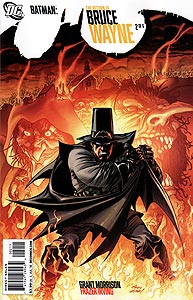 Cover Description: Witch-hunter Batman stands in a bed of fire as witches burn behind him. (No Booster Gold.)

This story has been reprinted in:
Batman: The Return of Bruce Wayne (2012)

Page 4, panel 2
Booster Gold, Green Lantern, Rip Hunter, Skeets, and Superman arrive at Vanishing Point, the headquarters of the Linear Men situated at the end of time. Typically, time does not pass relative to the occupants of Vanishing Point, but Hunter implies that this is not the case during this visit,...

Page 5, panel 1
...a viewpoint shared by Vanishing Point's sole occupant, a "biorganic archivist," who points out that the party has visited Vanishing Point following the departure of the Linear Men, an organization dedicated to the maintenance of the history of the DC Universe. Skeets notes that biorganic archivists are common in the 64th century, but the current time must be far later than that. Superman has previously visited as far into future as the 853rd century, where time was still intact. 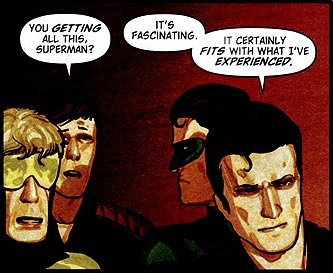 Page 6, panel 2
Though Hunter's expression is one of confusion, DC's resident Time Master could not possibly be confused by the archivist's explanation of what is essentially Hypertime.

Page 28, panel 3
Trapped less than 3 minutes from the end of existence, Booster is surprisingly useless, especially considering that his costume, when coupled with Skeet's programming, is capable of triggering the Time Platform in Rip Hunter's Arizona Laboratory.

Boosterrific Review: Typical of a Grant Morrison story, the more you read, the less you understand. On the up side, the issue features fantastically moody painted art by Frazer Irving. On the down side, Irving's depiction of Booster Gold looks like a slack-jawed moron. (His Superman and Batman do look suitably heroic, if you can get past Booster Gold. Maybe some can. Boosterrific can't.)