Looking for Love in All the Wrong Places

Given there's not much Booster stuff going on, outside of HiC and the movie rumours, I was thinking maybe you could toss in some "fluff" pieces for slow news days.

I couldn't agree more. In order to stay relevant in this modern age dominated by micro-blogging and podcasts, this site needs more content to encourage people to take the trouble of visiting us on their old-fashioned tablets and newfangled smartphones. Something to entertain. Something to get people talking. Something to give people who love Booster Gold a few moments of enjoyment at least once every few days.

Traditionally, my focus has been pretty narrow: document what DC and its fans are doing in the name of comics' greatest character, Booster Gold. It was created as a way to track every Booster Gold appearance in comics, every character he has interacted with, and every artist who has ever contributed to those appearances. The blog was originally added as a place to catch the "other stuff" that deserved documenting that didn't quite fit elsewhere. I still use it mainly for that purpose.

In the past, I've always tried to avoid the "fluff" piece that you'll find on many blogs. I don't believe that I am any more of an authority on Booster Gold than any of you who have been reading his comics. While I haven't been afraid to offer my opinion when I felt it appropriate, I have generally tried to avoid creating content whole cloth based on my personal feelings or flights of fancy. I can't imagine that anyone would want to know how I would rank my 10 favorite Booster Gold artists or what I would do if I was an editor at DC. This site should be about Booster Gold, not me.

That philosophy coupled with a distinct lack of Booster Gold news in the "New 52" era — and, admittedly, more than a little complacency and laziness — have resulted in more than a few posts that were less engaging than they perhaps could have been. However, like CDN, I think I can do better. No blog dedicated to Booster Gold should ever be boring. I can use my resources and this blog to present a better spotlight on what has made Booster's adventures unique and desirable. I can write the occasional piece on characters and artists I like, especially as they relate to our hero. And I don't see how it could hurt for me to review some more comics.

Thanks for that feedback, CDN. (He has more to say. We'll get to that next week.) If you have any suggestions for how to make Boosterrific.com even better, don't hesitate to leave your comment below or email me directly with the Contact page.

JoFridman posted on Dec. 7, 2018 at 10:10 AM
One thing I was think was a little section about the relationship Booster has with different characters of the DCU through the years, like how they met, how they get along, or what the other thinks about eachother

Boosterrific [Official Comment] posted on Dec. 7, 2018 at 1:42 PM
I feel like I kind of already do that in the character bios section. But I'll also be doing something similar starting next week on the blog. So stay tuned.

Steven Palchinski posted on Dec. 18, 2018 at 12:12 PM
Other possibilities for blog entries are Booster's most common team ups, Possiblities of Rip's mom/love interests. Also, since this somehow became a theory some believe and has tarnished Booster's reputation, debunking the belief of incest between Booster and Goldstar.

Boosterrific [Official Comment] posted on Dec. 18, 2018 at 3:39 PM
I think that last bit belongs in the "boostle" category as one of many things that "fans" talk about that does not need to be addressed on this site.

Steven Palchinski posted on Dec. 18, 2018 at 5:17 PM
That makes sense to me. I was frustrated by a person who citing that theory as fact spreading lies about Booster, even after I explained the holes in the theory.

The Many Faces of Booster Gold

Once upon a time, comic book publishers used the corner box at the top corner of their front covers to showcase characters appearing on the pages inside. The illustrated corner box is most strongly associated with Marvel Comics, which introduced it in the early 60s and used it to great effect for decades. DC's corner boxes have traditionally been a less flashy affair, though they did adopt the practice for a few years in the 90s. As a result, Booster Gold has never had an illustrated Corner Box on any issue of either of his solo series.

When I redesigned Boosterrific.com, I made sure to correct that. Those of you who visit the new Boosterrific.com on a desktop have probably noticed that I use a rotating assortment of art for the corner box to the top left of the masthead. (Those of you who visit via mobile devices probably only see the standard "menu" icon linking to the site menu.)

Today I present you all with this link to every one of the images you might find above.Can you recognize where they all came from?

Most of them are cover images, though some were taken from interior pages and others were created as commissions. (Personally, I still feel that Extreme Justice is underrepresented, though I'm liking that most showcase that groovy high collar.) If you don't see your favorite, give a holler. I'll see what I can do.

Diego Segovia posted on May. 29, 2018 at 4:16 AM
The three you should think of putting onto there, is The Batman: Brave and The Bold Booster Gold, and The Scribblenauts Booster Gold. Oh, and how about a female version of Booster? That cover where Zatanna turns Booster, Beetle, and Skeets into women? But either way that is impressive work. Love this site.

Welcome to the New Boosterrific.com

This is not an April Fools joke. Boosterrific.com really has gotten a facelift for 2018!

Arg! Change is bad! Why did I do it? The last significant site redesign was nearly a decade ago, and people don't use the Internet in the same way in 2018 as they did in 2010. (For one thing, no one capitalizes the word "Internet" anymore.)

While I was beginning to feel that the site was looking a little stale, the chief purpose of this overhaul was twofold:

As always, thank you for your patience as I work through this site overhaul. There are definitely still some bugs to work out and some site functionality has yet to be fully restored (like the next/last issue buttons for the comics details pages). If you stumble across something that doesn't seem to be working to your satisfaction, please drop me a line. The contact form is working fine, and you can always send an email to webmaster at Boosterrific.com.

Thank you to everyone who has ever visited. You have all contributed to making Boosterrific.com the Internet's greatest Booster Gold archive.

BoosterFett posted on Apr. 2, 2018 at 6:33 PM
I personally love the fact that you continue to capitalize "Internet."

Behind the scenes, Boosterrific.com is undergoing a long-delayed server upgrade.

For me, that means a lot of work migrating flies and databases from one server to another. I'll also start the process of cleaning out some of the dead links and other cobwebs around the house.

For you, that means that there is the possibility of disruptions in site performance in the next few days/weeks as I rearrange and try to prepare the site for the modern, mobile web. (I also have to decide what I want to do — if anything — about Google's requirement that all websites have SSL certification. I'm not made of money, Google!) 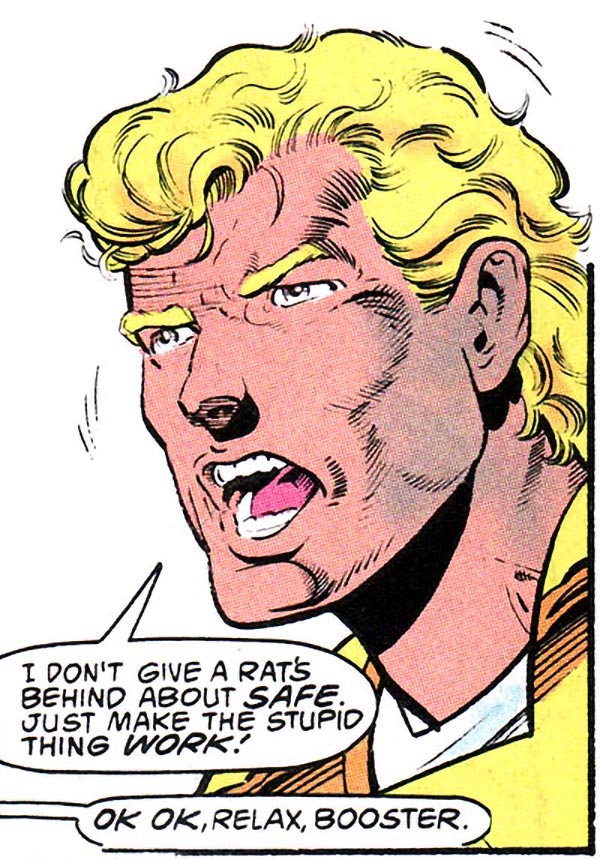 Please be patient with me during this overhaul.