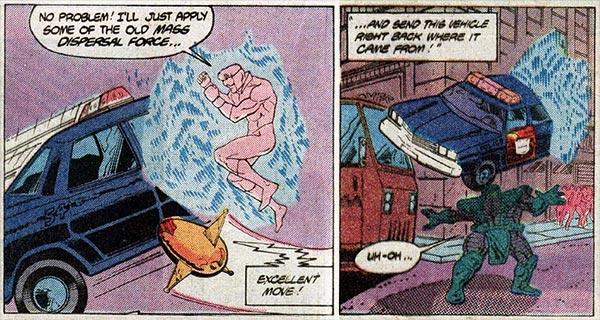 Booster Gold #1 was released 30 years ago this past week!

According to my records, Booster Gold #1 was released to specialty shops on October 29, 1985. It wasn't shipped to newsstands until nearly a month later on November 22. (That's how things worked at the dawn of the direct market.)

The following review of the first issue was written by R.A. Jones for the October 15, 1985, edition of Amazing Heroes magazine (issue #81):

It is not unusual to see a caped figure fighting crime in the streets of Metropolis — this has been Superman's beat for several decades. But now a new hero patrols those streets — a young man named Booster Gold.

Unlike Superman, though, who struggles to protect truth, justice, and the American Way, Booster's main goals seem to be fame, fun, and the Almighty Dollar. When we meet him, he is already established in Metropolis, seemingly known nationwide. His first mission is not to save the world, but rather to win for himself a $5 million contract to star in "Booster Gold the Motion Picture." At this he is quite successful.

The friend of moguls and mayors, Booster travels in a limousine chauffeured by his beauty of the wee — vacuous females with names like Bambi and Sunny. It seems only incidental that he also fights a supervillain who has stolen a Top Secret satellite guidance system.

Though it is not spelled out in this first story, Booster Gold is a 20-year-old who has come from the 22nd Century. He has brought with him a mechanical "companion" named Skeets, which acts as his advisor. Why he came to our century and how he came to be wearing a Legion of Super-Heroes flight ring are as yet unknown.

Booster Gold appears to be a lighthearted super-hero adventure series, somewhat in the mold of Blue Devil. There's just one thing that may prevent this from being as good a title – Booster himself is a rather unlikeable fellow.

It can be argued, and rightfully so, that the series, despite its light tone, is actually more realistic than the standard comic. After all, Booster behaves the way a real man probably would if he possessed super powers — he exploits those powers for his own personal financial gain. Toys, movies, commercial endorsements — he goes for it all, just as do modern celebrities, athletes, and even politicians.

And there's the rub. Frankly, I don't want a hero who's only good as a politician. I wouldn't mind Booster Gold's commercial endeavors if I at least felt that in other ways he was genuinely heroic; the idea of a hero using his powers to make a good living is certainly fresh and appealing. In this first episode, however, there is no evidence that Booster possesses any true heroic qualities.

Instead, he is portrayed as a rather shallow youth, one who is not above using his newfound affluence and influence to get whatever he wants. His arrogant behavior has no charm, and almost leads you to cheer for the villain. I want comic book characters who exhibit real human emotions and characterizations — but I also want to empathize with them. Without this, there's no joy in reading.

The supporting characters are equally lame. Skeets, his mechanical mentor, is just what you would expect — more intelligent than the human, and constantly chiding him for mistakes in judgment or use of modern jargon. There is Dirk Davis, Booster's agent, who fits every stereotype of the profession — a manipulative, smooth-talking, slightly unethical chauvinist. Davis lords over his secretary, Trixie Collins, who seems to be cursed with multiple personalities — behaving first like Millie Milquetoast, then like Jane Feminist, and finally like a nutso who demands that a salesman apologize to a cat!

With this cast of cliches and losers, the story could most assuredly have used a large helping of humor. While it is handled with a light hand, there is nothing here that would qualify as even mild comedy.

While Dan Jurgens has pretty well come a cropper with his scripting, he fares somewhat better with his pencilling. Jurgens is one of these midlevel artists who are so vital in the comic book industry — his work seldom excites you, but it is competent in the extreme, and one feels almost sure that he never misses a deadline. His art seems best suited for this sort of strip, more closely matching the style of the aforementioned

Blue Devil than does the script.

I don't want to completely dismiss this entire series on the basis of a single story which wasn't terrible by any means, but I'm afraid there's just not enough here for me to recommend the book. If that should change within the next few issues, I'll be the first to say so.

Yee-ouch! Hey, every character has growing pains, but it takes someone special to have earned so many great fans after 30 years.

Thanks to Dan Jurgens for everything.