5. Wednesday, October 13: Old Friends Are the Best Friends
In which we welcome back Booster's first 20th-century friend, the original Goldstar, Theresa "Trixie" Collins to the pages of Blue and Gold #3!

4. Wednesday, June 16: This Day in History: Black and Gold
In which we take a look back at the time Booster Gold took Black Canary to Paris in Justice League Annual #1 (1987).

3. Tuesday, October 19: Coming Soon: Blue and Gold 6
In which we reveal the advance solicitation for Blue and Gold #6 with Blackguard on the cover. In hindsight, that cover was used on Blue and Gold #4. What will be the cover actually be on issue 6? I guess we'll find out on February 15, 2022.

2. Monday, April 26: The History of Blue and Gold, Part 1
In which we investigate how a comic book series first announced in 1988 took 33 years to actually reach readers. (This was the first in a three part series. Follow these links to Part 2 and the Dan Jurgens interview in Part 3.)

1. Tuesday, July 20: New Release: Blue and Gold 1
In which we celebrate the release of the long delayed debut of Booster Gold/Blue Beetle team-up book Blue and Gold #1! This was the highest hit count Boosterrific.com had received in a single day in the history of the site! (Second place isn't even close.) People sure do love them some Blue and Gold!

Here's to another Boosterrific year in 2022!

Readers of Blue and Gold #3 may be unaware that Booster's old secretary, Theresa Collins, has previous history of providing office space to superheroes.

Teen Titans #17 (1998), written and drawn by Dan Jurgens, saw the Teen Titans reforming under the leadership of former Justice Leaguer Atom who had been de-aged to a teenager by Extant in Zero Hour.

To attract attention, the team chose the "hottest hangout in Metropolis" for its new headquarters: 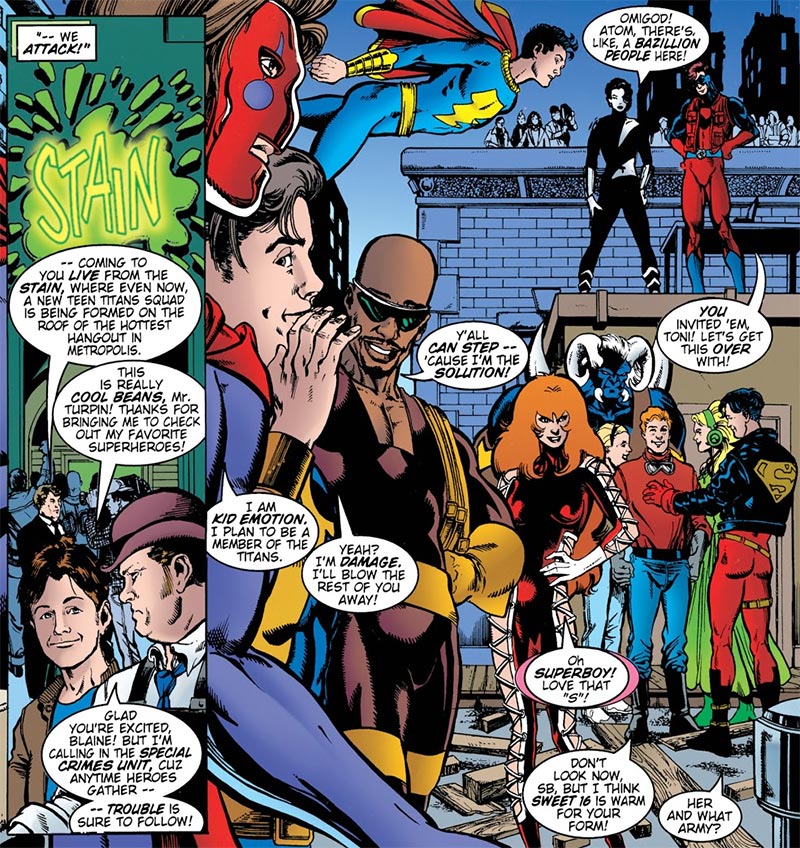 The Stain was a combination nightclub/arcade. In Teen Titans #18, its manager was — you guessed it — Trixie Collins.

Mercifully, this dysfunctional incarnation of the Titans was canceled eight issues after it started, but the Stain didn't last even that long. It was blown up by longtime team nemesis Deathstroke The Terminator in issue #22.

It's been two decades since the Stain was removed. I sure hope Trixie learned her lesson and has supervillain insurance for her new building.

Old Friends Are the Best Friends

The cover of Blue and Gold #3 teases "the million-dollar debut of Buggles," but the real guest of honor in this issue is...

It has been too long, girl! For those who don't remember, Trixie was Booster's first secretary at Goldstar, Inc. (as seen in the immortal Booster Gold #1 in 1985). Trixie was also the first to wear the Goldstar uniform. She and Booster made a great team back in the day.

When Booster joined the JLI full time, he and Trixie drifted apart. In fact, we haven't seen her since Chase #4 (in 1998!) while she was landlord to the Teen Titans. As you might expect from two former friends who couldn't make the time to maintain their relationship, their relationship was a bit frosty at the time.

It's good to see they've both grown past that.

In one of his long-lost-to-the-web "Gold Exchange" columns — presumably one that will be reprinted in his upcoming book — Russ Burlingame once reported that Dan Jurgens had plans to revisit Trixie in Booster Gold Volume 2, but the title was canceled before it ever happened. Thanks to DC for giving Jurgens another opportunity to bring Trixie back.

Ariel Justel posted on Oct. 14, 2021 at 2:31 PM
Am I crazy or Booster shouldn't have a star in his back? I'm seeing this detail in the image where Booster is hugging Trixie...

Boosterrific [Official Comment] posted on Oct. 14, 2021 at 2:49 PM
Back on the JLI days, Adam Hughes always drew a star on Booster's back, but few other artists have. Jurgens never has.

The life of any comic book hero would be a lonely one if not for the many characters who have made up their supporting cast. Just as Superman has Lois Lane and Batman has Alfred, Booster Gold has also shared his adventures with quite a few people over the years. Today we look at one of those, Trixie Collins.

Theresa “Trixie” Collins was introduced in Booster Gold Volume 1, #1 (1986) as the red-headed secretary of Goldstar, Inc, the small corporation that managed neophyte hero Booster Gold’s commercial marketing activities. Her responsibilities included both public relations and administrative assistance to both Booster and his managing agent, Dirk Davis.

Like Booster, Trixie wasn’t native to 20th-century Metropolis. She originally hailed from Kansas, relocating to the big city where she lived with her old-fashioned (and somewhat prudish) Aunt Jeanie in Jeanie’s spacious townhouse in one of Metropolis’ nicer old neighborhoods (Booster Gold #3). She didn’t spend too much time at home, however. Her bosses often took advantage of her work ethic and willingness to please, leading to many late nights at the office, filing reports and answering correspondence.

Overwork would be the least of Trixie’s problems. Being secretary to a super hero comes with a unique set of challenges. She was soon kidnapped by the 1000, who held her hostage in exchange for access to Goldstar’s secrets (Booster Gold #10). At the time, Trixie barely knew Booster’s real name. She wouldn’t learn the full truth of Booster's origins until after Booster saved her at great personal expense (Booster Gold #12). To return the favor, Trixie donned a super suit designed by Jack Soo that gave her the power of magnetism. She became the literal personification of her employer, Goldstar, and followed Michael "Booster" Carter back to the future where he could get the medical help he needed to recover (Booster Gold #13).

Trixie didn’t enjoy playing at being a super hero. Once she and Booster were safely returned to the 20th century, she hung up the tights for good and resumed her role as secretary for the newly renamed Booster Gold International (Booster Gold #16). Trixie would remain Booster’s loyal secretary until his corporation was bankrupted by an embezzler during the Millennium Crisis (Booster Gold #24).

Over the course of their adventures together, Trixie developed strong feelings for Booster and began to resent the time he spent with other women, especially “sex symbol” movie star Monica Lake. Sadly, their mutual friendship never had a chance to develop into anything romantic. The pair kissed only once, a kiss goodbye just before Booster left Metropolis for good (Booster Gold #25, 1988).

Trixie and Booster would cross paths only one more time. By 1998, Trixie had become the landlord of The Stain, one of Metropolis’ hottest nightclubs and headquarters of the Teen Titans. Trixie visited the Titans' public appearance at the L.L. Siegel & Shuster toy store in Metropolis. It was there she and Booster, who was dropping in to take advantage of the large crowd, exchanged a brief greeting (as seen in the pages of Chase #4). Whatever feelings the pair once shared had clearly cooled during their long separation. Not every love story has a happy ending.

For a bit of insight into creator Dan Jurgens' intentions into creating Trixie, click here to read my post from June 26, 2015.

Kevin Munson posted on Jan. 21, 2019 at 11:31 AM
In Booster Gold vol 2 as far as I know it is not mentioned who Rip's mother is but there is a picture of the back of her head. I like to believe that Booster's wife and Rip's mother is Trixie.

Boosterrific [Official Comment] posted on Jan. 21, 2019 at 10:45 PM
I can give you that poll, Rob.
(Sorry I didn't see your post earlier. I really don't enjoy visiting Facebook, so I only rarely check in there.)

Cort posted on Jan. 23, 2019 at 7:52 PM
Articles like this i'm enjoying quite a bit. Gives me a good reason to dig out stuff like The Chase. And to note; I hate how poor Booster has so many plot threads. Like Black Beetle being Red Beetle, the mystery girl in Flashpoint, and if his descendant or his sister are still around.