I wasn't planning on starting the week with any Booster Gold art, but when the Blot tweeted the latest addition to his sketchbook, I couldn't wait to share it.

This sketch was commissioned from artist Jae Lee at Comicpalooza 2019. I'm sure you'll agree it makes a fine addition to The Blot's collection, and a boosterrific way to start your week. Thanks for sharing, Blot!

I have a few commissions coming that hopefully will be ready to share later this year.

Let me take this opportunity to say that Boosterrific.com would not be Boosterrible if not for the support of Booster Gold fans worldwide. Thank you all. Today I will illustrate that in two ways:

First of all, big congratulations to Logan Peterson, who sent me this recent email:

I'm happy to say I just celebrated a long-awaited achievement. After years of scouring through longboxes and haggling with online vendors, I completed my Booster Gold floppy collection this weekend! With my procurement of Suicide Squad #13, I've officially collected a copy of every issue Michael Jon Carter has appeared in to date according to the database. :)

As I was double-checking my collection against the Boosterific listings to make sure I hadn't missed anything, I actually found that there were two Booster appearances not listed in the database. Check out Tales of the Teen Titans #89 and 90--Booster shows up briefly in all his caped glory.

How awesome is that? Answer: very awesome.

Logan was right. I did not have those Tales of the Teen Titans in the Boosterrific database. Those issues were reprints of New Teen Titans #29 and 30 which I had somehow overlooked... for 30 years. *sigh* But that oversight is now corrected. Thanks, Logan!

My second proof that Booster Gold fans are the best is our old friend The Blot, who via pointed me to this Instagram post by 23kidoo (aka Scott Swanson): 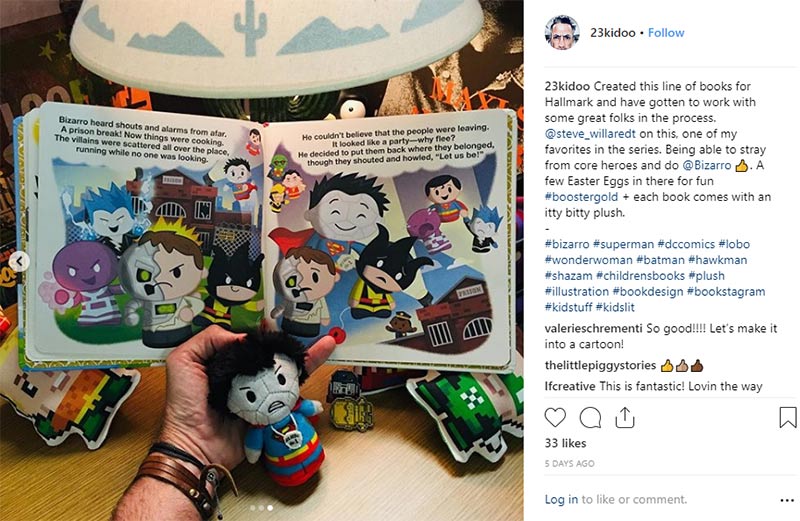 That book by Alex Boney and Steve Willaredt (in which tiny Booster Gold and friends appear to help Bizarro fix everything) is officially called the "itty bittys® Superman™ Bizarro™ Fixes Everything Stuffed Animal and Book Set." You can buy it on Hallmark.com for $19.95. It was released last year, and I may never have known about it without a shout out from The Blot. Thanks, Blot!

Keep all the tips coming, Booster boosters! If you ever find anything that you think Booster Gold fans should know about, you can always drop me a line through my convenient contact form. You're all the best.

I begged The Blot for another peek at his Booster Gold sketchbook, and he finally gave in! Check out these two he picked up at last year's Comicpalooza convention in Houston: 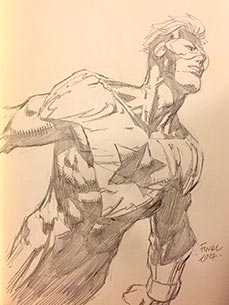 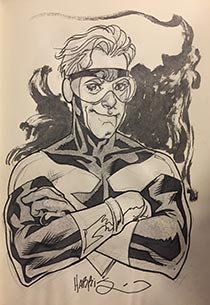 From left to right, that's the work of David Finch and Tony Harris. (Click on either image to see a larger pic in a new window.)

You can see more of The Blot Says' Booster Gold Sketchbook on Flickr.com.

Thanks, Blot. You're a true Booster booster!

It's been a while since we last saw The Blot's sketchbook, but he's back to add this commission he got from Phil Hester at Bedrock City Comic Company in Houston, Texas last October. 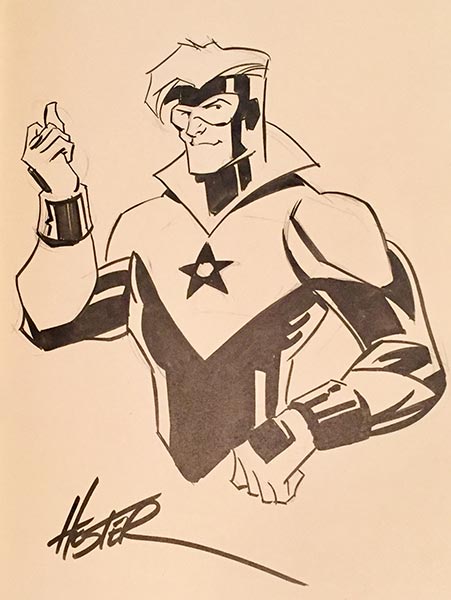 You can see more commissions in The Blot Says' Booster Gold Sketchbook on Flickr.com. Thanks for sharing, Blot.