Clean Your Room or Taste Laser

Eric Martsolf has been playing Brady Black on the daytime soap opera Days of Our Lives since 2008. But Booster Gold fans know him better as the only person to date to play a live action Booster Gold on television.

Martsolf was recently interviewed by Canadian television website, GlobalTV.com, where he doubled down on his earlier comments about the legacy of playing Booster Gold.

GlobalTV.com: From playing various roles in shows such as Days of Our Lives, Passions, and Global's own NCIS, what has been your favourite role to date?

Eric: Besides Brady Black it would have to be Booster Gold from the Smallville series because I got to fly. I got to show Clark Kent how to be Superman and it was just cool. I got a lot of credit with my kids because at the age that they were at, they truly believed that I could shoot lasers out of my wrists and if they misbehaved they thought I was going to shoot a laser at them. That role has just given me a lot back.

Booster Gold is the role that keeps on giving.

Bigger Than Gone With the Wind

The first trailer for CW's Batwoman television show was released yesterday. It will soon accompany the network's Supergirl, Arrow, The Flash, Legends of Tomorrow, and Black Lightning.

Meanwhile, the DC Universe is almost ready to unveil a (second) Swamp Thing series to go with its Doom Patrol and Titans series. Stargirl is on her way.

It sure seems like there are a ton of live action series based on DC Universe properties out there right now, with more in the pipeline. You can probably see where I'm going with this.

When will it be Booster Gold's turn to star in his own show?

SyFy teased us with an announcement of a Booster Gold project years ago, but that never even went to pilot. Then there was news of a movie produced by the powers that created the "Arrowverse." That hasn't materialized, either (though rumors persist that it isn't "dead"). What's the deal, DC? Are you holding Booster back for the perfect moment?

Watching the march of DC characters getting their own shows before Booster Gold wouldn't be so grating if a live-action Booster Gold project wasn't literally the first thing Booster ever sold us when we first met him 33 years ago in Booster Gold #1. 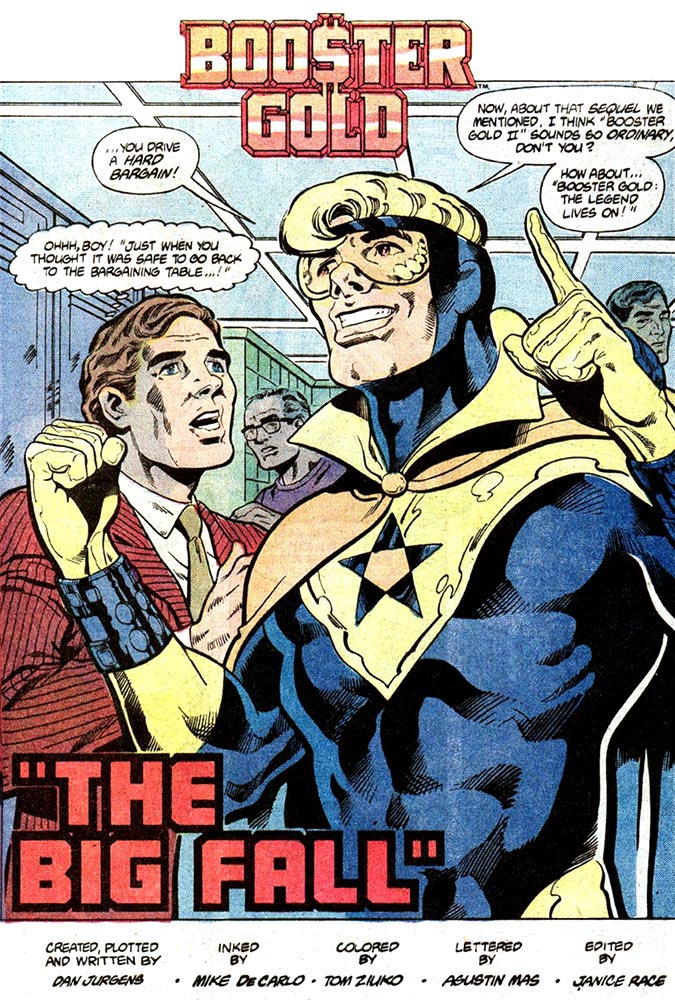 Bob Rossetto posted on May. 21, 2019 at 9:33 PM
I thought that one of the best places to find Booster in the TV universe would be in DC Legends of Tomorrow. Given his connection to Wave Rider and Rip Hunter respectively but I am starting to give up hope in that regard.

Booster Gold fans will recognize actor Eric Martsolf as the first (and so far only) actor to play our hero in a live action production. (For the record, that was on the Smallville episode "Booster" airing April 22, 2011 as the 18th episode of the series' 10th season. Remember this?)

Martsolf is still acting on daytime television and was recently interviewed by Michael Maloney for TV Insider during which he reminisced about his Smallville days.

TV Insider: You got to play humor when you played Booster Gold on Smallville. How much fun was that?

Martsolf: That was my favorite role to date. It was funny, heroic, a comic book come to life; I loved getting to play someone who’s completely larger than life. I got credit from my kids for playing a character who’s a member of the Justice League. I still have [fans] from the DC Universe and the Smallville world hit me up on social media, trying to get a Booster Gold movie going on, but now I may have to settle for playing his dad. Then again, he is a time traveler.

TV Insider: Was there anything from the Smallville episode you got to keep? Probably not the Booster Gold costume!

Martsolf: No, that custom-made to my body leather outfit, I think, was more expensive more than my first house was! I did get to keep several of the Booster Gold fan club shirts [that were in the show as a story point]. At the end of the episode, I, as Booster, throw one to Clark (Tom Welling) and say, ‘You’re an XL, right, Clark?’ I remember after the scene I gave Tom a hug [goodbye] and he said take as many of those shirts as you want.

Booster's dad, Jonar Carter, is a thoroughly bad seed. If When Booster ever returns to the screen, Jonar would make a great antagonist. And Martsolf would get another shot at keeping his own "body leather outfit," this time as the masked Supernova. Yes, I would definitely watch that.

(The t-shirt Martsolf mentions seen in the episode, by the way, was the Booster Gold Fan Club t-shirt released in 2009 by Graphitti Designs under license of DC Comics with art by Dan Jurgens.)

You can read the whole article, mostly about Martsolf's experiences on the soap operas Days of Our Lives and Passions, at TVInsider.com.

Wake Up to Action Next Week

Grab those rabbit ears, Booster boosters! It looks like Cartoon Network will finally be airing the final 6 Justice League Action episodes next week.

New episodes should air every day next week at 6:15AM Eastern/Pacific, but we've got our eyes out for two in particular. Per the episode synopses reported by SupermanHomepage.com:

“Watchtower Tours”
Monday, May 7 at 6:15 a.m. (ET/PT)
When Booster Gold starts to secretly give tours of the Watchtower to make some extra cash, he inadvertently brings in a super villain disguised as a tourist.

“She Wore Red Velvet”
Saturday, May 12 at 6:15 a.m. (ET/PT)
When Booster and the JLA come under attack by a mysterious and unrelenting new villainess known as Red Velvet, Booster comes to realize she’s actually the fiance he left at the altar in the future.

Dedicated Boosterholics may already be aware that these "new" JLAction episodes have been released overseas and via the Cartoon Network app, but this is the first time they will be coming to American televisions.

I already have my alarm clock set!

Made for Television Event

Newsarama.com recently declared Booster Gold the best time-traveling comic book hero "of all time." (Does that include the comic books of the future?) However, Booster still isn't as well known as television's greatest time traveler, Doctor Who.

Ross Pearsall has done his part to correct that imbalance in two recent issues of his long-running Super-Team Family Presents... mash-ups. 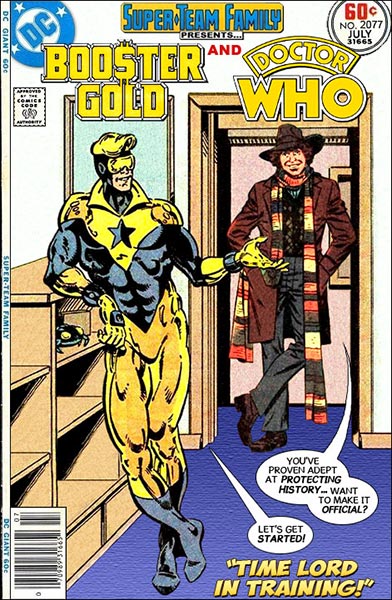 And these aren't the only Booster Gold related team-ups Pearsall has given us in the past month. Ross also reunited Roboforce, the all-robot team of Skeets, R2D2, Red Tornado, Atomic Robo, and Machine Man in a battle against their mortal enemy, Magnus: Robot Fighter! You can see that issue on braveandboldlost.blogspot.com.