You may recall that when first announced, Heroes in Crisis was originally intended to be a seven issue series with a couple of stand-alone tie-in books. Plans changed, and those stand-alone issues were folded into the series.

The first was issue #3, which focused in part on Booster Gold's actions just before the story started. The second, issue #6, comes out today. Judging the book by its cover, I think we can expect it to show what Harley Quinn was doing when the Sanctuary killings began. 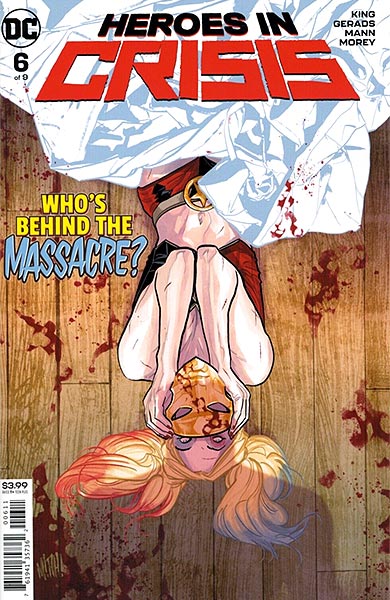 Note that Mitch Gerads is the credited artist for the issue, replacing Clay Mann. Mann's art has been the strength of the series so far, but Gerads shouldn't be considered a step down. Gerads worked with series writer Tom King to create their acclaimed Mister Miracle mini-series.

Also note that neither the issue's solicitation text nor the preview, available on SuperheroHype.com, guarantee Booster Gold will actually appear in the issue. I'll be buying it anyway.

[UPDATE: Booster appears on exactly one page. I think. (It's getting increasingly hard to tell what "reality" is in this series).]

Some people who play video games want more than the default characters. They want to customize the action and play with their heroes. We have those gamers to thank for the following Booster skins, costumes, and mods.

Moving clockwise from the left:

As a bonus, check out this Create a Wrestler version of the Smallville Booster posted to the forum at SuperHeroHype.com:

Telephone Numbers Are Shorter in Smallville

I cannot believe how much buzz I keep encountering about Booster Gold's appearance on Smallville. There was some interest when Geoff Johns said it was coming last summer. Then there was some excitement when Eric Martsolf was cast in the role in January. Pictures of the costume two weeks ago blew the doors off the internet. And now there's Firday's trailer promo (which I posted here) that is literally everywhere.

You expect that sort of thing on Newsarama.com or


And also the greatest hero nobody will ever know...