We'll Always Have Our Heroes

No Booster Gold this September? Big deal. Before we go whining that we Booster Gold fans have it bad, let's stop to commiserate with fans of another character who have had it worse. Specifically, fans of Barry Allen, the Silver Age Flash.

Allen's first appearance marks the dawn of the Silver Age. Without Barry Allen and his interaction with the heroes of yesteryear, DC's continuity would be nothing outside of Barman/Superman crossovers. After two-and-a-half decades of entertaining stories, he was sacrificed to the gods of comic book mega-crossovers, rarely to be seen for another two-and-a-half decades. May Booster Gold never share that fate!

Booster Gold didn't debut in the DCU until nearly four months after Barry Allen sacrificed himself in Crisis on Infinite Earths #8. The two characters wouldn't cross paths for nearly 22 years in the pages of Booster Gold Volume 2, #3, and even that was an accident! 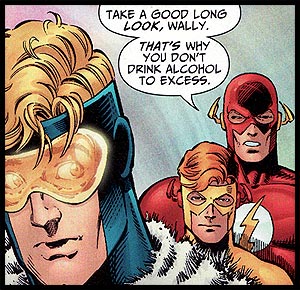 In celebration of its fourth anniversary, SpeedForce.org is currently asking Flash fans to share their favorite Flash moments. Site visitors will be able to vote on their favorite memories, and winners will receive Flash-related prizes. Submissions are open through tomorrow night, so if you've got a story to share, act fast!

deusex2 posted on Jun. 18, 2012 at 1:03 PM
Kids, don't listen to The Flash! Drinking alcohol to excess with Jonah Hex saved Superman's life...of course only if it's Booster Gold who does the drinking

Jesster posted on Jun. 18, 2012 at 6:58 PM
I think Wally West fans may have it worse than Barry Allen fans do. At least when Barry was "dead" you knew where he was and what he was doing.

Boosterrific [Official Comment] posted on Jun. 18, 2012 at 7:25 PM
Fair point. I'll be clear: I think the way DC has handed the Flashes in recent years is the most misguided mangling of a valuable property that I've ever seen in comic book publishing. After two decades of making Wally West one of the most human characters in the company, promoting him in his own title as well as JLA and Titans, and featuring him in wildly-successful television cartoons, DC banishes the character from its reality. Honestly, I don't know how Wally West fans can restrain themselves from surrounding the DC offices with torches and pitchforks these days.

...not that I'd like someone else becoming Booster Gold II any time soon..

Hmmm...I wonder when will they have Booster Gold as a guest star of the show?

The following blog post has been brought to you by the Super Friends of DC Comics fan blogging: Shag of Firestorm fan site FirestormFan.com pointed out this weekend that Lia of Flash fan site SpeedForce.org posted a video last week from Cartoon Network's Mad that features Booster Gold. (Sometimes tracking Booster Gold, like life, is all about who you know.)

That song sounds to me like something you might hear on TMZ. That's probably fitting for a song including a part by the celebrity-seeking Booster Gold.

For the record, that video, posted to YouTube by Vitouliss, was broadcast in the MAD episode "Al Pacino and the Chipmunks / That's What Super Friends Are For" that originally aired February 27, 2012.

Morgenstern posted on Mar. 26, 2012 at 10:11 AM
Nice find, and while I myself hope that we will one day see an actual Booster Gold musical..I hope it is better than this (albeit funny)song.

Loved seeing the Flash family, the JLI, and many others get some spotlight in there!