This Day in History: Death Rattle

Many, many of you seem very excited about this Cable vs Booster Gold DEATH BATTLE!, so let's just go ahead and watch it, shall we? (The really good stuff starts at about 13:20, just after the Blue Apron ad.)

Hmmm. Let's see. Booster Gold's force field is strong enough to stop Superman, so yeah, it'd stop whatever Cable could throw at it. But mind control? I'm not sure that scans.

For the record, despite what the video says, it wasn't Booster's force field that saved his memories in Justice League: Generation Lost. Booster himself assumes in issue #2 that the four members of the JLI that were unaffected by Max Lord's re-writing of history were saved by the mechanics of Lord's broadcast (much in the same way that radio waves directed outward from radio antennas fail to send a signal to the base of the tower). Then Lord seems to say in issue #5 that he left them their memories on purpose. Either way, the force field deserves no credit.

But why let a few technicalities distract from a fun time, eh?

(I *really* should keep my mouth shut here. Death Battle has 4.5 million subscribers, which makes it very likely that more people will see Booster Gold for the first time in this YouTube video than any other singe occasion in the character's history. For comparison, the Smallville episode "Booster" — broadcast on this day in 2011 — was watched by a mere 2.3 million people. Death Battle for the win!)

Thanks to all who sent me the link.

Michael Stalans posted on Apr. 23, 2020 at 1:14 AM
I was surprised about this fight and the outcome, Booster Gold was my favorite hero when I was 10, and now that I've seen him defeat Cable, he's officially my favorite hero all the way.

Clean Your Room or Taste Laser

Eric Martsolf has been playing Brady Black on the daytime soap opera Days of Our Lives since 2008. But Booster Gold fans know him better as the only person to date to play a live action Booster Gold on television.

Martsolf was recently interviewed by Canadian television website, GlobalTV.com, where he doubled down on his earlier comments about the legacy of playing Booster Gold.

GlobalTV.com: From playing various roles in shows such as Days of Our Lives, Passions, and Global's own NCIS, what has been your favourite role to date?

Eric: Besides Brady Black it would have to be Booster Gold from the Smallville series because I got to fly. I got to show Clark Kent how to be Superman and it was just cool. I got a lot of credit with my kids because at the age that they were at, they truly believed that I could shoot lasers out of my wrists and if they misbehaved they thought I was going to shoot a laser at them. That role has just given me a lot back.

Booster Gold is the role that keeps on giving.

Booster Gold fans will recognize actor Eric Martsolf as the first (and so far only) actor to play our hero in a live action production. (For the record, that was on the Smallville episode "Booster" airing April 22, 2011 as the 18th episode of the series' 10th season. Remember this?)

Martsolf is still acting on daytime television and was recently interviewed by Michael Maloney for TV Insider during which he reminisced about his Smallville days.

TV Insider: You got to play humor when you played Booster Gold on Smallville. How much fun was that?

Martsolf: That was my favorite role to date. It was funny, heroic, a comic book come to life; I loved getting to play someone who’s completely larger than life. I got credit from my kids for playing a character who’s a member of the Justice League. I still have [fans] from the DC Universe and the Smallville world hit me up on social media, trying to get a Booster Gold movie going on, but now I may have to settle for playing his dad. Then again, he is a time traveler.

TV Insider: Was there anything from the Smallville episode you got to keep? Probably not the Booster Gold costume!

Martsolf: No, that custom-made to my body leather outfit, I think, was more expensive more than my first house was! I did get to keep several of the Booster Gold fan club shirts [that were in the show as a story point]. At the end of the episode, I, as Booster, throw one to Clark (Tom Welling) and say, ‘You’re an XL, right, Clark?’ I remember after the scene I gave Tom a hug [goodbye] and he said take as many of those shirts as you want.

Booster's dad, Jonar Carter, is a thoroughly bad seed. If When Booster ever returns to the screen, Jonar would make a great antagonist. And Martsolf would get another shot at keeping his own "body leather outfit," this time as the masked Supernova. Yes, I would definitely watch that.

(The t-shirt Martsolf mentions seen in the episode, by the way, was the Booster Gold Fan Club t-shirt released in 2009 by Graphitti Designs under license of DC Comics with art by Dan Jurgens.)

You can read the whole article, mostly about Martsolf's experiences on the soap operas Days of Our Lives and Passions, at TVInsider.com.

Do you like leather jackets? Do you want to dress like actor Eric Martsolf from Smallville? Do you have $178? If you answered yes to all three of those questions, Sky-Seller.com might be the site for you! 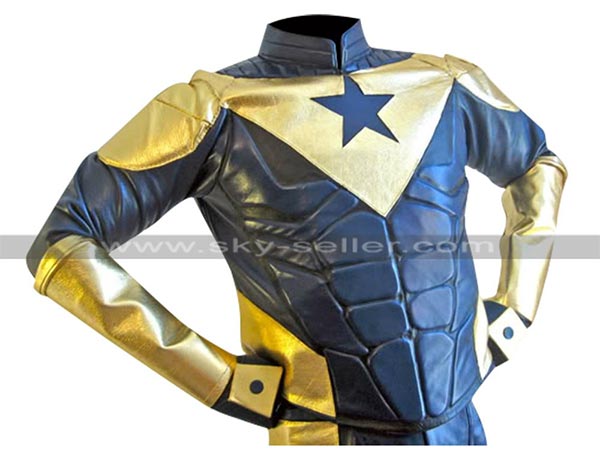 Or maybe you'd prefer to save $3 and order from LeatherJackets.com: 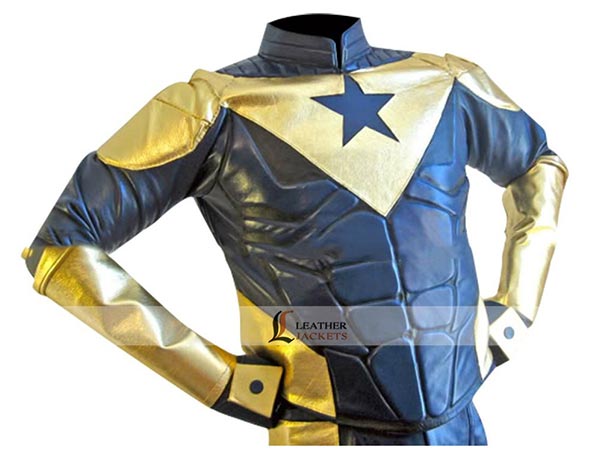 Hmm. That image looks awfully familiar. Where have I seen that before? Oh, yes, I remember now: 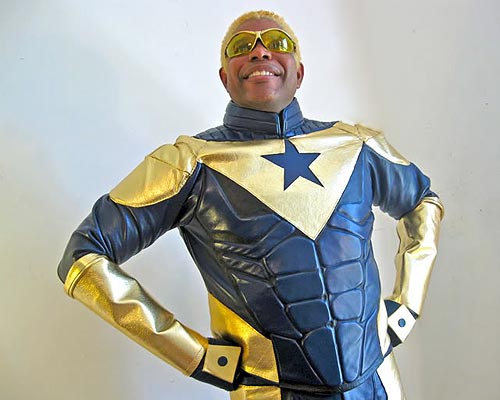 That's thomdave wearing the costume he had made for Comic-Con 2011. At the time, he credited the costume to Abby Polakow (of Cape & Cowl Creations).

Sky-Seller.com is registered to a private company in Panama. LeatherJackets.com is registered to an apparel company in San Francisco (B.L.K. International) which claims to have been in business for 20 years. If you look closely, you'll see that the LeatherJackets image is a poorly retouched version of the Sky-Seller image (you can clearly see the use of the clone tool to cover where the "Sky-Seller.com" watermark has been removed).

So Sky-Seller "borrowed" and retouched the image from thomdave's original forum post, and LeatherJackets "borrowed" that image and retouched it. Neither of them appear to have anything to do with Polakow, who has her own craft store on etsy.com.

The moral of today's post, boys and girls, is before you trust someone with your $175, you might want to do a bit of homework. Anyone who takes credit for someone else's work might not be the most trustworthy vendor.

Boosterrific [Official Comment] posted on Oct. 27, 2016 at 3:20 AM
Found another one. Famous Jackets ( www.famous-jackets.co.uk ) has the same image with another watermark. Once again, the asking price is about $175. I guess that's what it cost to make a leather jacket these days.

Today DC Comics releases the final print edition of Smallville Season 11. There are no plans for a Season 12, which means we've likely seen the last of the Smallville continuity that gave us Eric Martsolf's interpretation of Booster Gold.

When will we see another live-action Booster Gold? Your guess is as good as mine.