You all know I'm not much for the rumor mill, but when the CW announced to Entertainment Weekly on Wednesday that actor Donald Fiason (most famous as a lead in the long-running Scrubs) will be joining the cast of DC's Legends of Tomorrow, they described his character thusly:

"The Legends first encounter this character at a different phase of his career whose golden years are in the rearview mirror. He is good guy deep down; his ego is looking for a boost that only fame, fortune, and glory can provide. While he claims to have been recruited to work for a mysterious time organization, he wasn't offered much of a choice in the matter. As an unauthorized time traveler with high-profile aspirations, he developed a mischievous streak and cuts a few corners along the way to achieving his dreams. He knows all about the Legends of Tomorrow and finds them inspiring because they are the kind of heroes who started at the ground floor, as opposed to inheriting their powers from an alien planet, a spider bite, or wealthy parents. But the big question is whether his respect for the team is going to be able to help the Legends out of hot water or get them into hotter water!"

If that sounds a lot like a description of one Michael Jon "Booster" Carter to you, know that you're not alone. I've seen several entertainment websites draw the same conclusion, and even the Internet's foremost Booster Gold reporter, Russ Burlingame, reports on the speculation at ComicBook.com.

So, will Faison be playing Booster Gold? Or are the producers of DC's Legends of Tomorrow teasing us? I guess we'll all find out when the finale airs on March 2.

Boosterrific [Official Comment] posted on Feb. 5, 2022 at 2:30 PM
@Herb, I don't regularly watch the show. Are they usually good about that sort of thing? My experience with DCEU in general and CW shows in specific is that no, we should not expect them to be "comic book accurate."
If this *is* Booster Gold (which is not yet guaranteed), so long as they get the core of the character right -- cocky, insecure, well-intentioned -- and expose him to a larger audience, I'll be satisfied enough. I like Faison as an actor, and I'd certainly like to see his take on the character.

Herb posted on Feb. 27, 2022 at 12:32 AM
I don't follow the CW shows anymore. Ever since they stopped broadcasting them over the air locally in Canada, I haven't seen any of them. I don't watch enough TV to justify subscribing to all the streaming services they are on. The local streaming services have pick up various shows, but not one of them has all the shows and I refuse to sign up for 4-5 different packages to get them.

That said, I just was watching a panel of the recent Fan Expo Vancouver, and a guest from Legends, Adam Tsekhman did bring up a date from the 25th Century. Not sure if this is a sly hint for next week's episode where Booster might show up. It happens around the 13 minute mark

Cheap at Twice the Price

As I type this, the #1 New Release on Amazon.com in the category of Comics & Graphic Novels Literary Criticism is

If you don't remember the original "Gold Exchange" columns, Russ explains their history in the introduction to the book:

It started at Comic Related, and moved to Blog@Newsarama when I did. Just as I was beginning my time at ComicBook.com, the site where I still work, Booster Gold vol. 2 ended, and with it, The Gold Exchange. There were occasional returns to the story of Booster Gold, and I usually took the opportunity to discuss them with Dan, but as a recurring feature, the column effectively ended with Flashpoint, like so many other things at DC.

With Comic Related now defunct and Blog@Newsarama several facelifts (and owners) on from my short time there, none of this material is online in its original form anymore. Back in 2008, I was assured by both outlets that I owned all the content I created there, so while the more recent content is owned by ViacomCBS (the parent company of ComicBook), the contents of this book represent an updated, formatted, and edited version of a PDF I put together in 2011, with the intent of offering it at the ComicBook booth when I tabled at New York Comic Con.

For that reason, while some introductions and notes reflect that this book is releasing in 2021, the “real-time” commentary element of the interviews is retained as much as possible. This is, to an extent, preserving a moment in Booster’s history, and comics history, in amber. Appreciate it for what it is, and enjoy the many, many times I tried to get Dan to tell me a spoiler, only to have him say “Stay tuned.”

I read those columns in their native locations, and I'm still tuned. (When will we get to find out who the Black Beetle is, Dan?!)

Russ was kind enough to share a preview copy of the book with me, and I can heartily recommend it to any Booster Gold (or comic book) fan who wants to know a little more about how the sausage is made, so to speak.

Support comics journalism and get your own Kindle copy (paperback coming soon, maybe even by the end of the week!) at amazon.com.

Those of you who had pre-ordered a Kindle version of Russ Burlingame's "Gold Exchange" columns from Amazon.com may have gotten some unpleasant news earlier this week when the listing was withdrawn and pre-order payments were refunded.

I reached out to Burlingame, and he explained that he was still working on completing the book but unexpected delays had been caused by family health issues.

I tried to push the release date to November 17, but Amazon never processed that and I received word that preorders had been cancelled when I missed my prepub date on Sunday. Unless something else happens I should still have it ready for readers between now and 11/17, but unfortunately because I missed my initial deadline they will not reinstate the preorders, and it won’t be available to buy until I have uploaded the files.

While that is a setback, it is good to know the book is still in the works. I've worked with Amazon a bit myself (plug, plug), and I know how it can be.

Old Friends Are the Best Friends

The cover of Blue and Gold #3 teases "the million-dollar debut of Buggles," but the real guest of honor in this issue is...

It has been too long, girl! For those who don't remember, Trixie was Booster's first secretary at Goldstar, Inc. (as seen in the immortal Booster Gold #1 in 1985). Trixie was also the first to wear the Goldstar uniform. She and Booster made a great team back in the day.

When Booster joined the JLI full time, he and Trixie drifted apart. In fact, we haven't seen her since Chase #4 (in 1998!) while she was landlord to the Teen Titans. As you might expect from two former friends who couldn't make the time to maintain their relationship, their relationship was a bit frosty at the time. 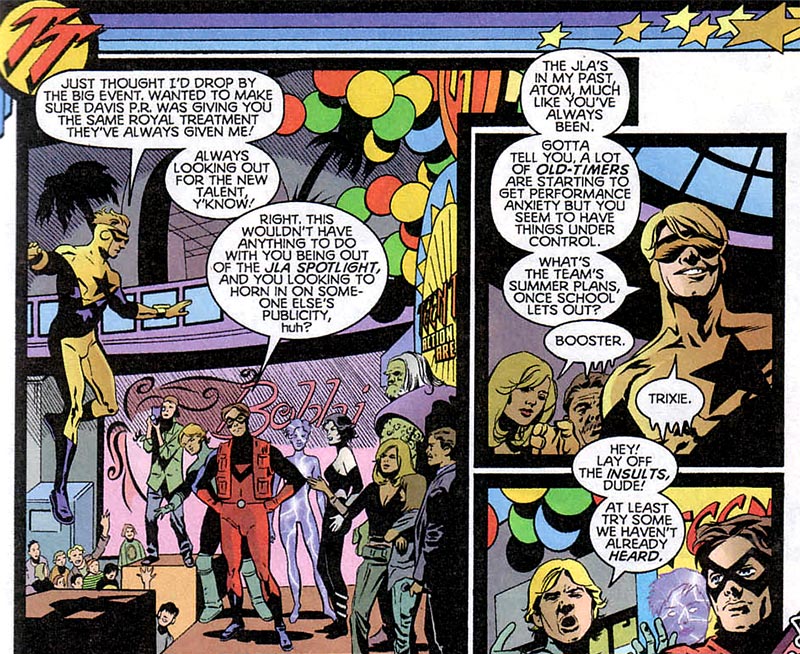 It's good to see they've both grown past that.

In one of his long-lost-to-the-web "Gold Exchange" columns — presumably one that will be reprinted in his upcoming book — Russ Burlingame once reported that Dan Jurgens had plans to revisit Trixie in Booster Gold Volume 2, but the title was canceled before it ever happened. Thanks to DC for giving Jurgens another opportunity to bring Trixie back.

Ariel Justel posted on Oct. 14, 2021 at 2:31 PM
Am I crazy or Booster shouldn't have a star in his back? I'm seeing this detail in the image where Booster is hugging Trixie...

Boosterrific [Official Comment] posted on Oct. 14, 2021 at 2:49 PM
Back on the JLI days, Adam Hughes always drew a star on Booster's back, but few other artists have. Jurgens never has.