Hail to the Chief

Until 1933, the term of the President of the United States began on March 4. This created a long delay between the election, held in November, and the incoming government's ability to take action. The 20th Amendment to the United States Constitution was passed in order to reduce this lame duck period during which the country was effectively ungoverned.

The first president to be inaugurated on the newly mandated date of January 20 was Franklin Delano Roosevelt, inaugurated to his second term on January 20, 1937, eighty years ago today. 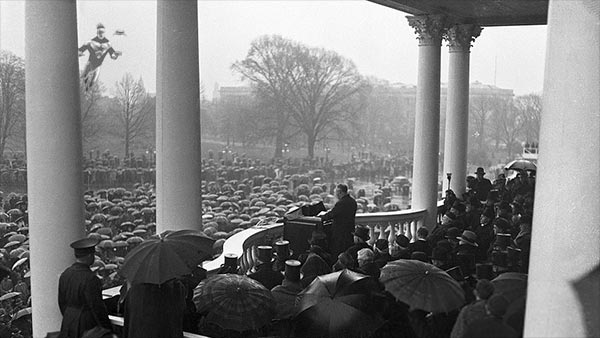 Inauguration Day 1937 saw a record 1.77 inches of rain fall in 37° weather in Washington DC. Fun! Newspaper reports of the day say that crowds didn't linger long after FDR's public swearing in on the Capitol steps, and who can blame them? I'm sure most of them didn't have an impenetrable 25th-century force field to keep them dry.

Tinuvial posted on Jan. 20, 2017 at 2:58 PM
Of course, we do have to remember that before all our modern technology, people often had to wait months for votes to be tallied, the electoral college to meet, and for the new president and his people to travel to Washington, D.C.

Sometimes, I think we're rather spoiled by all the instant updates on election night; we really have no idea of how things used to be even twenty years ago, much less a century ago!

When you're out buying a car or mattress today, remember what this holiday is really all about: Booster Gold. 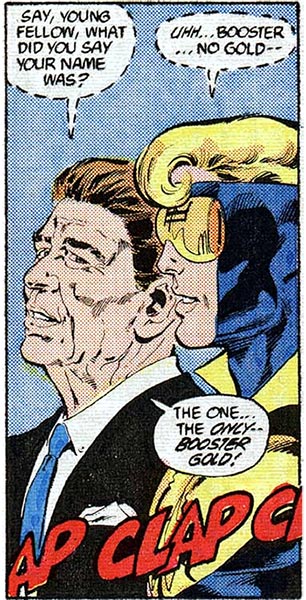 In 1985, Ronald Reagan gave Booster Gold his codename. I think that is something we can all celebrate.

Hail to the Chief

Booster Gold was introduced to the public by President Ronald Reagan.

Booster never had the chance to meet President George W. Bush, as Booster's old foe/employer Lex Luthor won the election of 2000 in the DCU.