Statler and Waldorf in Blue and Gold

My two favorite muppets as my two favorite heroes, as sketched by illustrator Neil R King, aka BoldFacedComics on DeviantArt.com. 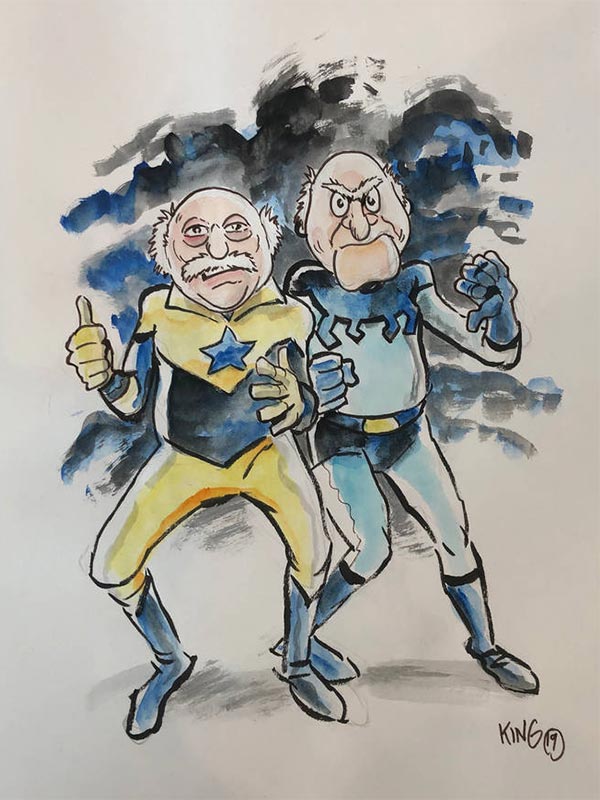 Boosterrific [Official Comment] posted on Apr. 29, 2019 at 10:30 PM
Oh, I wish I could take some credit for this bit of inspired genius, but I can't. I don't know who requested this particular sketch. King posted it to his Deviant Art account without attribution, and I just reposted it.

rob snow posted on Apr. 30, 2019 at 4:58 PM
Hey just a headsup. Looks like DC is republishing the 80s Booster and Beetle runs in color. Both are on Amazon

I accidentally stumbled across this sketch on Instagram while researching cosplay pics. Of course, I'm keen on any Booster Gold sketch that includes the high collar, but I'm even more taken with the bird on his shoulder!

Why does Booster have a bird? What kind of bird is it? Parrot? Raven? Eagle? Why is it dressed in it's own costume? Is it a robot? Is it a new look for Skeets? Inquiring minds want to know!

Only 20 Shopping Days Left until Christmas

The clock is ticking. Do you have a gift for that special someone yet? How about an artifact from a time gone by, a nostalgic reminder of when comic book collecting was mainstream and everyone believed that their comic collection would pay their way through college. You know, 1991. 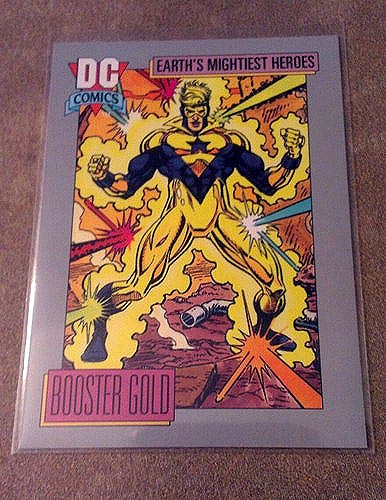 Even in 1991, Booster Gold was among Earth's Mightiest Heroes. Seller petspawn is selling this time capsule-in-a-trading card this week on eBay.com. As I type this, bidding is up to $0.99. That's cheaper than the cover price of comics even then!

Whether you're looking for a stocking stuffer or just something to stick between the spokes on your bicycle wheels, go for the Gold!

Boosterrific [Official Comment] posted on Dec. 4, 2012 at 4:00 PM
Heh. If that was Liefeld art, both feet would be obscured by debris and more than just one leg would look out of place. That large, flat crotch looks like Dan Jurgens' work to me.
UPDATE 12/28/12: Credits for the art are printed on the back of the card. Pencils: Dan Jurgens. Inks: Brett Breeding.

A Star Is Born?

No surprises here: the Labrador Retriever has been America's favorite dog breed for decades.

Last week's poll question: If Booster Gold was a dog, which breed would he be? (37 votes)

Jim Brown in The Dirty Dozen. Brett Favre in Something About Mary. Merlin Olsen in Little House on the Prairie. Fran Tarkenton in That's Incredible. All famous athletes making notable screen appearances. How would you expect Booster Gold to follow in their footsteps?