There Really Should Be a Booster Gold Comic

On Tuesday, Evan Narcisse ranted in favor of the need for a Booster Gold comic in 2015 on Kotauku.com.

While I whole-heatedly support Evan's call for a new series, I would disagree with his assessment of Micheal Jon Carter as a little harsh.

He's a pitchman that only does heroic deeds to burnish his own recognizability. In an age where Twitter and Instagram follower counts are a thing for some people to envy, we need a superhero series who'd obsess over how many faves and retweets his exploits get.

Even at his worst, in the early issues of the first volume of Booster Gold, Booster clearly cared about "doing the right thing." He'd just be sure that he maximized the profit return on that behavior. That's not being a jerk. That's being human.

Is it a hero's job to rescue every cat stuck in every tree? That may be ideal moral behavior, but is it rational? Or possible? An omnipotent alien like Superman may have the resources to catch every purse snatcher and still help little old ladies across the street, but a Booster Gold has to eat and pay bills. Everyday heroes like policemen and firemen are paid for doing their jobs, so why should we expect "super" heroes to do their work for free?

What Narcisse and I do agree on is that Booster Gold is imperfect, just like you and me. That's what makes him interesting, and that's why we need more Booster Gold in 2015.

Richard posted on Jan. 10, 2015 at 9:27 AM
I think that they dropped the ball with Booster a long time ago. They missed how much possibility the character has for a study in what it means to be a hero. He's still had some moments (Booster Gold 16 after his penthouse is destroyed, even though the owners recouped their losses, he overpays to buy the property in order to rebuild, giving other tenants a rent-free year. Heroism. Blue Beetle reminiscing on the death of Superman in The OMAC Project, commenting that surely Booster knew about what was happening, but he still jumped in and took the first hit. Heroism. Booster Gold defying the Doctor-Who-esque fixed point in time of Barbara Gordon's paralysis--over and over again, despite nearly dying multiple times. Heroism.), but broadly speaking, they've treated him too much like a joke or like the arrogant fool Narcisse sees. Never mind that that's (mostly, if you don't count Giffenverse) a consciously-groomed perspective, because it sells ads. If you look at the early Booster comics, too, you can see some of the potential rivalries from living in an established city--Superman instantly dislikes him, he comes up against Luthor personally and in business and heroics--but which never really got developed. It's truly a shame.

Grimmy posted on Jan. 10, 2015 at 12:26 PM
I don't think Booster cares as much for the money as the attention and fame (ex-football star), which makes his "real" secret identity as a Time Master all the more ironic. He may potentially be the most influential hero in the DC Universe or Multiverse for that matter.

bob posted on Jan. 12, 2015 at 3:53 PM
An imperfect hero is always more interesting than a perfect one. Stories are better when failure is a possibility. Even when he succeeds it still doesn't mean he did it right, which leaves consequences all which keeps things interesting and gives you a reason to read it.

Did you know that Justice League International #6 will be released next week? 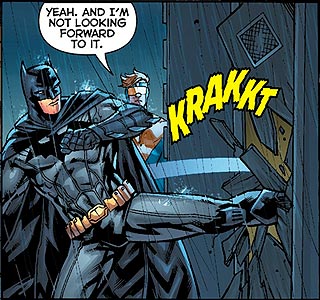 Well, I am. Fortunately for me, Boosterrific Forum contributor CDN pointed out that Kotaku.com has a 5-page preview of the issue. Given that Booster Gold appears on all five pages, hinting that it will be a very Booster-oriented issue, I have to say that I like what I've seen.

(And I'll like it even more if we finally get to meet the DCnU Skeets.)

Booster Gold: Both Brave and Bold

According to a report at kotaku.com, Booster Gold will be an optional in-game support character for Batman in the upcoming Batman: the Brave and the Bold video game produced by Warner Brothers/WayForward for the Wii.

"When Booster flew in, the paparazzi showed up, he zapped each enemy and flew away. He's a celebrity super-hero, so that's what he does." -- Stephen Totilo for kotaku.com

While you will not be able to play as Booster, some Booster is better than none. Since the game is based on the cartoon, is there any chance that Booster will be voiced by Tom Everet Scott?

The game is scheduled for a September 2010 release, so you should be able to play this in between episodes of the series' third and final season. Game details are available at the kidswb.com official site here.