SF Debris started the week with a pointed but loving critique of the greatest episode ever animated of Justice League Unlimited. (Can you believe it's been almost 12 years since it first aired?)

Despite including the interesting footnote that the episode was originally intended as a Firestorm story, SF Debris somehow failed to credit the episode's writer, Andrew Kreisberg, or director, Dan Riba. Oversight corrected.

You can see the whole video yourself by visiting sfdebris.com. Thanks to Morgenstern for the link.

Last week's announcement of Justice League Action reminds us that it's been ten years since Justice League Unlimited went off the air. To celebrate this sad anniversary, Darren Bonthuys at lazygamer.net has listed his ten episodes that exemplify why JLU is the model that all future superhero cartoons should emulate. Included in his list is what is arguably Booster Gold's finest hour: "The Greatest Story Never Told."

Choosing to be a superhero, is an inherently noble act. Donning a mask, risking your life and fighting a neverending battle is a thankless task which doesn't exactly pay the bills. And then there's Booster Gold. Unlike heroes who are motivated solely by grief or a better nature, Booster Gold is in it for the fame.

I don't agree with Bonthuys entire list (frankly, I consider "Clash" to be a terrible episode), but I can't deny that "The Greatest Story Never Told" is my favorite of the series. In showcasing the story of a side-lined b-list hero, the episode demonstrates that every character can be interesting and worthwhile. Knowing Booster Gold is on crowd control makes the entire DC Universe more interesting.

Of course, we can't discuss this show without offering a special thank you to episode writer Andrew Kreisberg. That the person responsible for Booster's best television moment is the same man partially responsible for shepherding the live-action DC Universe remains encouraging. At the very least, Kreisberg "gets" Booster Gold, and it seems likely that whenever Booster Gold does return to the small screen, he'll be exactly the character we expect him to be.

Meanwhile, how will Booster Gold's appearances on Justice League Action stand up against "The Greatest Story Never Told"? Let's hope for the best.

Today marks the release of all three seasons of Justice League Unlimited on Blu-Ray. For the first time you'll be able to watch "The Greatest Story Never Told" in high definition. That alone should be worth the $35.99 MSRP.

(Believe it or not, that episode is 11 years old! You probably watched it on a CRT. Remember those? Gee whiz.)

You are all no doubt familiar with the work of J.M. DeMatteis, the Justice League International writer who must share credit for making Booster Gold the man we know and love today. (And if you're not, shame on you!) DeMatteis has been writing for Booster Gold off and on for nearly three decades, but it turns out that he's written more than we've previously seen.

On Wednesday, DeMatteis posted on his blog a treatment for an rejected Justice League Unlimited episode featuring Martian Manunter and his Oreos addiction (as explored elsewhere in Martian Manhunter #24). Naturally, Booster Gold has a part to play.

"So," Booster says, "we’re doing security, right?" "So," J'onn replies, "you're doing security, wrong." Bwanna Beast gets very excited, thinking that means they're the ones J'onn is picking to do the actual negotiations. "Even I'm," Booster says, "not stupid enough to believe that." "Thus exhibiting a level of self-knowledge," J'onn interjects, "that I thought was beyond you." "Thanks," Booster replies. "I think."

If you like DeMatteis' humorous writing or Martian Manhunter or JLU, you owe it to yourself to visit J.M. DeMatteis' Creation Point and give it a read.

Grimmy posted on Jan. 19, 2015 at 6:01 AM
I can't tell you how much I love the intent, and hate the writing style. It's like reading Asimov's "Foundation Trilogy", but not as long. Still appreciated. 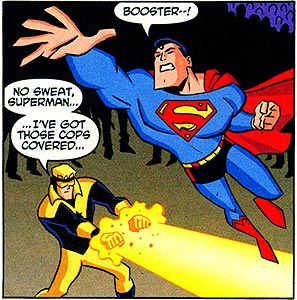 Beechen hasn't written many Booster Gold stories, but he did feature our favorite hero in 2004's Justice League Unlimited #2, where a fresh-face Booster Gold learned to let Superman cheat at cards. (Talk about role reversal!)