Writer Joshua Williamson continues to channel Grant Morrison for Justice League Incarnate, and in this week's issue 3 the team takes a side trip to Earth-33 (the reincarnation of former Earth-Prime, home of the multiversal villain Superboy-Prime), now the Earth where ideas are born. One idea is obviously Booster Gold, as seen in this fella's t-shirt: 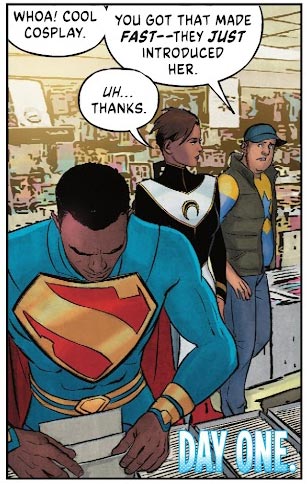 Footnote 1 — I know that this is a Booster Gold fansite, but I personally think that the real value of Justice League Incarnate #3 lies not in the reveal of "Booster Gold t-shirt guy" of Earth-33 but the discovery that Doctor Batman has been sent to Earth-26, formerly known as Earth-C. Last we'd heard, in Dark Nights: Death Metal: Multiverse’s End #1, Captain Carrot's "funny animals" Earth-C Earth-26 Zoo Crew had been killed by Perpetua's minions (so dark!). It's good to know that my favorite childhood heroes are alive and well again in the Infinite Frontier-era Omniverse. Hooray!

Footnote 2 — Earth-26, Earth-Prime, Earth-33, Earth-C, Multiverse, Hypertime, Dark Multiverse, Omniverse... boy, howdy. Does anyone else remember that 1985's Crisis on Infinite Earths was supposed to simplify the DC Universe to make it accessible to new readers? So why, now that the multiverse is back, is it more complicated than ever before? Did we finally just give up on new readers?

Footnote 3 — Both Justice League Incarnate and Justice League Infinity, both released this week and both featuring Booster Gold references, are about plots to destroy the multiverse. (Technically, they are separate multiverses, as the JLU never crosses over with the original JLA.) It sure seems like even DC's writers think the darn thing has gotten too complicated.

Oops. I'm starting to sound a bit like Superboy-Prime myself, aren't I?