I Play One on TV

Watching the 2020 Tokyo Olympics, I'm seeing commercials with Olympic athletes who, according to disclaimers at the bottom of the screen, don't even use the products they're endorsing.

Why do I feel I've seen this all before? 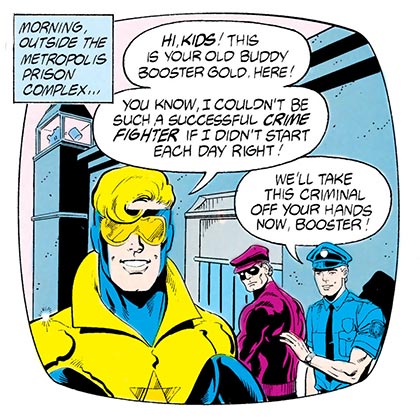 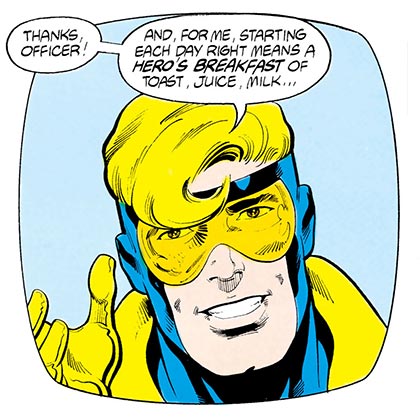 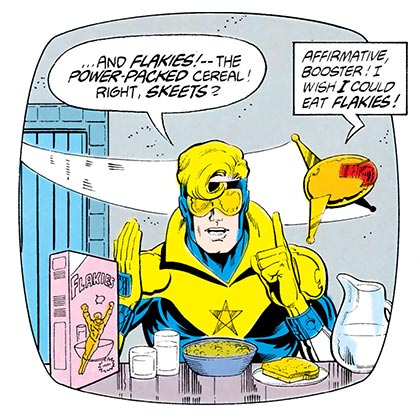 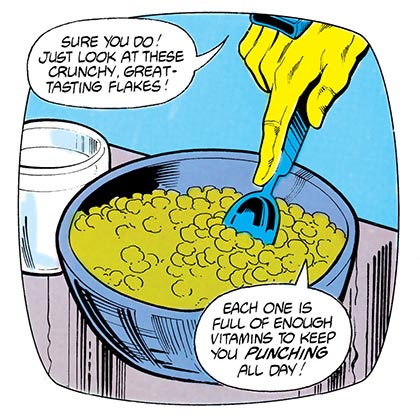 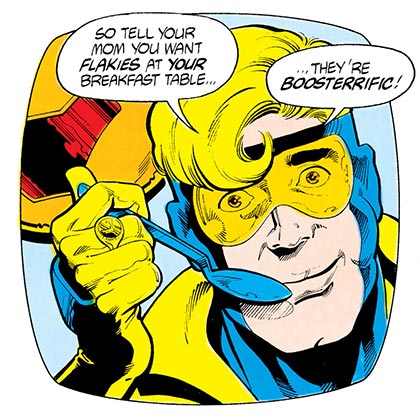 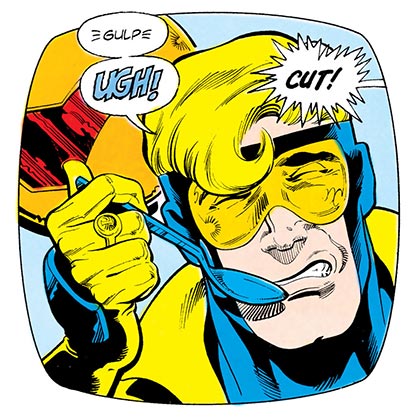 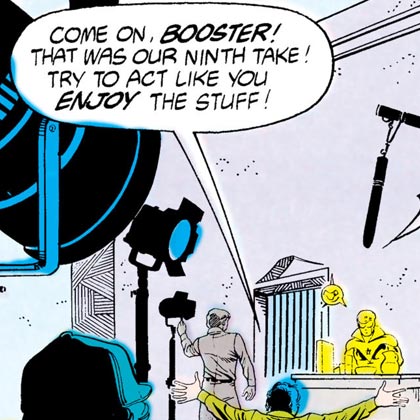 In my "Secret Origin of Booster Gold" interview with Dan Jurgens, Booster's creator describes his inspiration this way:

Much of Booster was inspired by the '84 Olympics when I saw an athlete described as having an endorsement contract without ever having won a medal. Many of the BG ideas were already in place but that sort of galvanized it.

The years might roll by, but Booster Gold and the forces of commercial opportunism and social insecurity that drive him and his misadventures are as relevant as ever.

FKÀjason posted on Aug. 3, 2021 at 3:32 AM
I like how Skeets was on board with what Booster was hocking. I bet you wish you could eat Flakies, Skeets, I bet you do.

Frankie Hagan posted on Aug. 18, 2021 at 12:01 PM
Gotta live that clean Jurgens art. I think I picked up the first issue because it made me think of early LSH Giffen. It evolved into a really iconic style.

Dan Jurgens' latest interview about his forthcoming project, Blue and Gold — perhaps you've heard of it? — is online at DymanicForces.com.

Interviewer Byron Brewer was unable to coerce the famously tight-lipped Jurgens into revealing much that we didn't already know, but he did get these fun tidbits:

BB: Tell us a little bit about the overall storyline of this limited series.

Dan Jurgens: After going off on their own for a couple of years, Booster and the Beetle have reunited with the idea of forming a true partnership that gives them the chance to help people. Not as heroes for hire, but as heroes whose mission is supported by crowdfunding, as they seek to help those who don’t have access to Superman, Wonder Woman and the rest of the heroic pantheon.

BB: Please tell me Skeets is in this one!

Dan Jurgens: Absolutely! And we may even have an all-new addition of—oh, wait. I can’t mention that yet.

Dynamic Forces specializes in artist-signed limited edition comics. If you're thinking about getting your hands on a Jurgens-signed Blue and Gold #1, know that dynamicforces.com is already selling its "Elite Gold Signature" edition for $89.99. It'd be a deal at twice the price!

Boosterrific [Official Comment] posted on Jul. 9, 2021 at 7:10 PM
That's the cover from his announcement he will be writing a HUMAN TARGET series this fall. So everything is fine.

I would like to thank all the Booster boosters who pointed me to Monday's Nerdist.com interview with the writer of the upcoming Blue and Gold mini-series by some guy named Dan Jurgens.

It is a pretty interesting read, and not just because it has an exclusive 5-page preview of the first issue. For example,

[I]n the wake of Dark Nights: Death Metal, the heroes of the DC Universe remember all previous continuities. So will remembering all this trauma play into Blue and Gold?

Turns out, not so much. According to Jurgens, "Booster is aware of it, of course, while Ted doesn’t want to address it. He knows of it but also buries it."

Jurgens elaborated further, saying, "From a creative standpoint, I don't want to dwell on it. We did it in the 2007 Booster Gold series and I'm hesitant to dive into something that is now 15 plus years old. I think we're far better off simply driving right into current stories. That's what seems most fair to readers, as anything else ends up with multiple pages of explanation."

It's been 15 years since volume 2? Thanks for making me feel old, Dan.

All kidding aside, one of Jurgens' greatest strengths as a writer has always been an ability to blend the old and new so that new readers don't feel excluded while still winking at longtime fans. While that can occasionally be frustrating — no, seriously, *who* is the Black Beetle? — we have to recognize that's how comics worked throughout their heyday, and if a publisher isn't attracting new readers, they might as well go ahead and close up shop.

On a personal note, I should mention that Jurgens' "big tent" approach to comic book universe continuity has also made building this site so much fun. It's easy to imagine that all of Booster Gold's adventures have happened to a single character in a dynamic universe when the artist shepherding that character's growth has been so careful not to infringe upon the creations of the many other artists contributing to the ever-expanding multiversal tapestry. Jurgens knows that the first principle of good collaborative storytelling is learning to say "Yes, and...."

I strongly recommend that if you haven't already, you drop by Nerdist.com to read Eric Diaz's article. As I said above, it's got pictures. You *definitely* want to see the pictures of Ryan Sook's art.

And I suppose it probably goes without saying that you also *definitely* want to buy Blue and Gold when it comes out in three weeks.

Cort posted on Jun. 30, 2021 at 12:46 PM
I think this is the best approach to go about it. I mean it's there but it doesn't have to bog down what they will do going forward. It's still canon Booster grieved for his lost friend. But he has a rare opportunity to have him back, probably best not to question it.

Eskana posted on Jun. 30, 2021 at 5:42 PM
Agreed. One Beetle is back, I don't think either of them would really want to linger on the past. Honestly, I'd be more interested in what Booster was doing while Ted was being impersonated by Black Mask, or how (if the Omniverse is really legit) Ted was both previously IN the Justice League (in pre-New 52) and NOT in the Justice League (Rebirth.)

And also, are we getting the return of Trixie Collins in this new run? :)

Michael Stalans posted on Jul. 3, 2021 at 11:01 AM
I can't wait for this series to come out, I've been dying for a Blue and Gold adventure sense I first read about their adventures from the Justice League International.

From Blue to Gold and Everything Between

As pointed out to me by Rob Snow, New York Comic Con and Metaverse Comics has released a 45-minute long video interview with Blue and Gold creators Dan Jurgens and Ryan Sook to promote the upcoming series.

The creators talk about what kind of story it will be, whether or not new fans will have any idea what's going on, and which of them feels more like Booster and which feels more like Beetle. (Spoiler Alert! It's exactly the ones you expect.) They even screenshare some artwork and script plans. I'd say it's worth a listen for die-hard Booster boosters.

If the above embed doesn't work for you, you can find the video at Facebook.com or FindTheMetaverse.com.

Thanks, Rob, Jurgens, and Ryan (and interviewer Mike Negin)! Blue and Gold is set for a late July release.