Pros and Cons of the Return of Blue and Gold

Ok. We know for sure that Booster Gold and Blue Beetle will be reunited in the year 3000 in the pages of Justice League 3000 #12. But what does that mean, exactly?

Russ Burlingame discussed what to expect with Marlene of I Like Comics, Too! on Sunday:

Russ: One of my readers pointed out that he didn't understand why a future based on Giffen & DeMatteis's stories would be any different from the future of the pre-New 52 DC Universe. I figured it couldn't hurt to look at that a little bit.

I mean, there are some obvious differences, right? Dan Jurgens actually wrote a line into Booster Gold Vol. 2 to accommodate the whole "married a rich old heiress" thing (even if the line was that he was joking) but that's about it. There are plenty of other things that happen in the Keith and Marc stories that don't seem to have any bearing on the rest of the DC Universe, and/or conflict with existing stories.

Marlene: There are definitely some differences in how the characters are written, especially Booster. Though Jurgens created him as an unconventional, mildly air-headed superhero-for-hire, it was the original Justice League International run that really shaped the character as most fans know and love him. It's also where his relationship with Blue Beetle was fleshed out.

Compared to Jurgens' original design through Booster's self-titled series and his eventual modern adaptation with the New 52 reboot, Giffen & DeMatteis's version was far sillier and more immature. While he and Beetle certainly had their clever moments, they primarily served as the comic relief of the team.

You can read the rest of their discussion at ComicBook.com.

Ryan posted on Sep. 24, 2014 at 8:28 AM
Im fine with old goofy blue and gold. I love the more mature Booster also, but I think Mass culture knows Booster as silly. I will just think of this as old adventures. It seems Jl300 sales are right on the edge of being canceled, so I plan to enjoy it while I can.

RussBurlingame posted on Sep. 25, 2014 at 3:31 PM
If it helps any, that's not what I've heard when I've asked people in the industry. They could be fibbing, but as far as I know, JL3K is safe at least for the time being.

Better to Receive Than to Give

Here's something we don't see everyday: a commission of Booster Gold in his New 52 uniform! 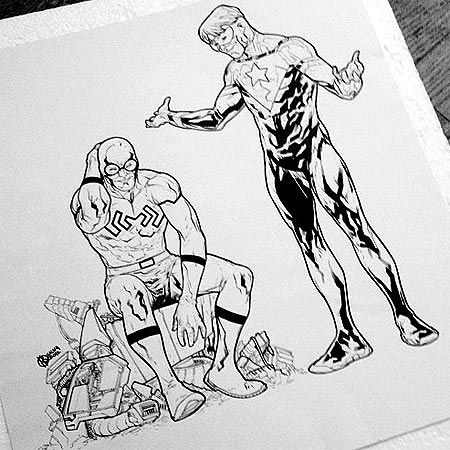 This piece was commissioned from Superboy artist RB Silva by comics blogger Marlene of I Like Comics Too. You can find snapshots of this good looking piece of art at the Instagram sites of both the artist and the patron.

UPDATE 12/22/2012: Marlene pointed out on Twitter last week that the piece was not a commission but a premade.

Today kicks off this weekend's 2010 New York Comic Con, billed as the biggest comics expo on the East Coast. DC certainly plans to have a presence at the convention even if they aren't planning any Booster Gold events. Thankfully, Ilikecomicstoo is picking up DC's slack and will be hosting an informal gathering for Booster Gold and Blue Beetle fans on Saturday at noon. Details are on her website, ilikecomictoo.wordpress.com, or her YouTube channel, www.youtube.com/user/ilikecomicstoo. Have a good time, everybody.

BoosterPowershot posted on Oct. 9, 2010 at 11:28 PM
Dammit! I have a full weekend pass and I didn't see this until now! Oh man, I would have LOVED to be there. Ugh. So little Booster at this comic-con. All I've been able to find is a Booster Gold fan club shirt, which I promptly bought, of course.

ugg posted on Oct. 15, 2010 at 1:28 AM
Dammit! I have a full weekend pass and I didn't see this until now! Oh man, I would have LOVED to be there. Ugh. So little Booster at this comic-con. All I've been able to find is a Booster Gold fan club shirt, which I promptly bought, of course.