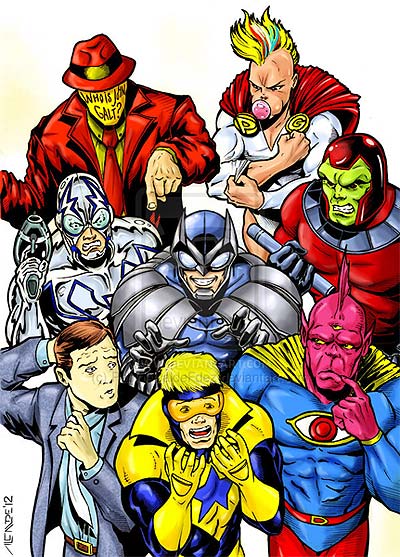 Pointalists Can Be Heroes, Too

Since I started the week with something borrowed from FirestormFan.com, I feel it is appropriate to end that way, too.

There's a lot to see in the piece, but the best part is no doubt Booster Gold and Godiva canoodling underneath the trees. Ah, l'amour.

The above digital print on canvas by Rey Taira, Saturday Morning in Front of La Salle De Justice, is clearly modeled on the classic 1884 Georges Seaurat painting A Sunday on La Grande Jatte. Taira created this and a companion piece of villains lounging before the Hall of Doom for DC's "We Can Be Heroes" campaign.

This picture was found at kicada.tumblr.com, but another view and links to more pieces in the exhibition can be found at The Idol-Head of Dibolu.