Rather than wait for Friday, I might as well tell you about this week's new release today in the hopes that maybe you haven't been to your Local Comic Shop yet. I'll plan on resuming my regular Monday/Wednesday/Friday posting schedule next week, assuming James Gunn can refrain from dropping big Booster Gold news on my off days again.

(That's ok, DC. Whenever you've got something important to say about Booster Gold, you go right ahead. I might be a Grumpy Gus, but I'm always listening.)

It warms my heart to be able to say that Booster Gold makes a cameo appearance in this week's DC's Harley Quinn Romances #1. Technically, the cameo is his dating profile in an app for superhero hook-ups (as viewed by former Justice League International teammates Fire and Ice), but that's close enough, right?

The issue is an anthology with eight different stories. That panel is from "Dating App Disaster," and all Booster boosters will be relieved to know that Booster isn't the titular disaster.

Ten dollars is a bit steep for a single panel Booster Gold cameo, but I'm a sucker for these short-story anthology issues. I can't necessarily recommend it to everyone, but I personally bought this issue and made Skeets happy.

This series is intended to address all of Booster Gold's comics in the order of their publication, yet so far, I've only covered issues of Booster Gold Volume 1. I've skipped spotlighting issues of New Teen Titans, The Outsiders, and the earliest issues of Justice League because Booster doesn't appear on a full page's worth of panels.

Now, at last, we come to Booster's first significant appearance outside of his own title. It also happens to be my single favorite Booster Gold comic story of all time and the number one entry in my list of the Twelve Best Booster Gold Stories Ever. If you read the title to this post, you already know I'm talking about Justice League #4.

I can (and have) looked at this book all day. But if I could look at only one page of panels from Justice League #4, it would be the only page one with a smiling Batman. 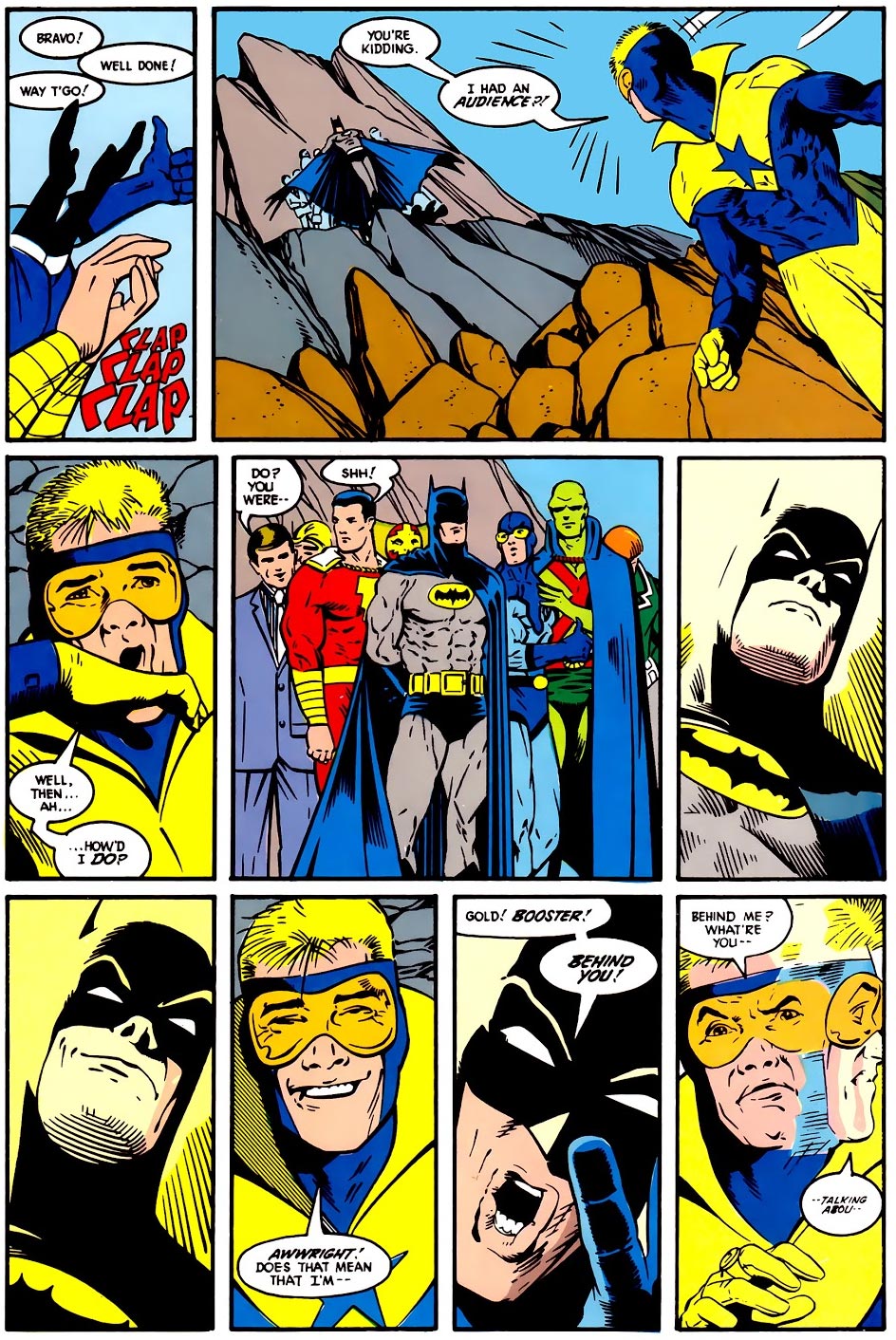 I like how Batman's smile dawns after the line break, but I especially love that Booster's head turn in the final panel builds tension while leading to the single panel on the second page of this two-page spread, where artist Kevin Maguire gives us this: 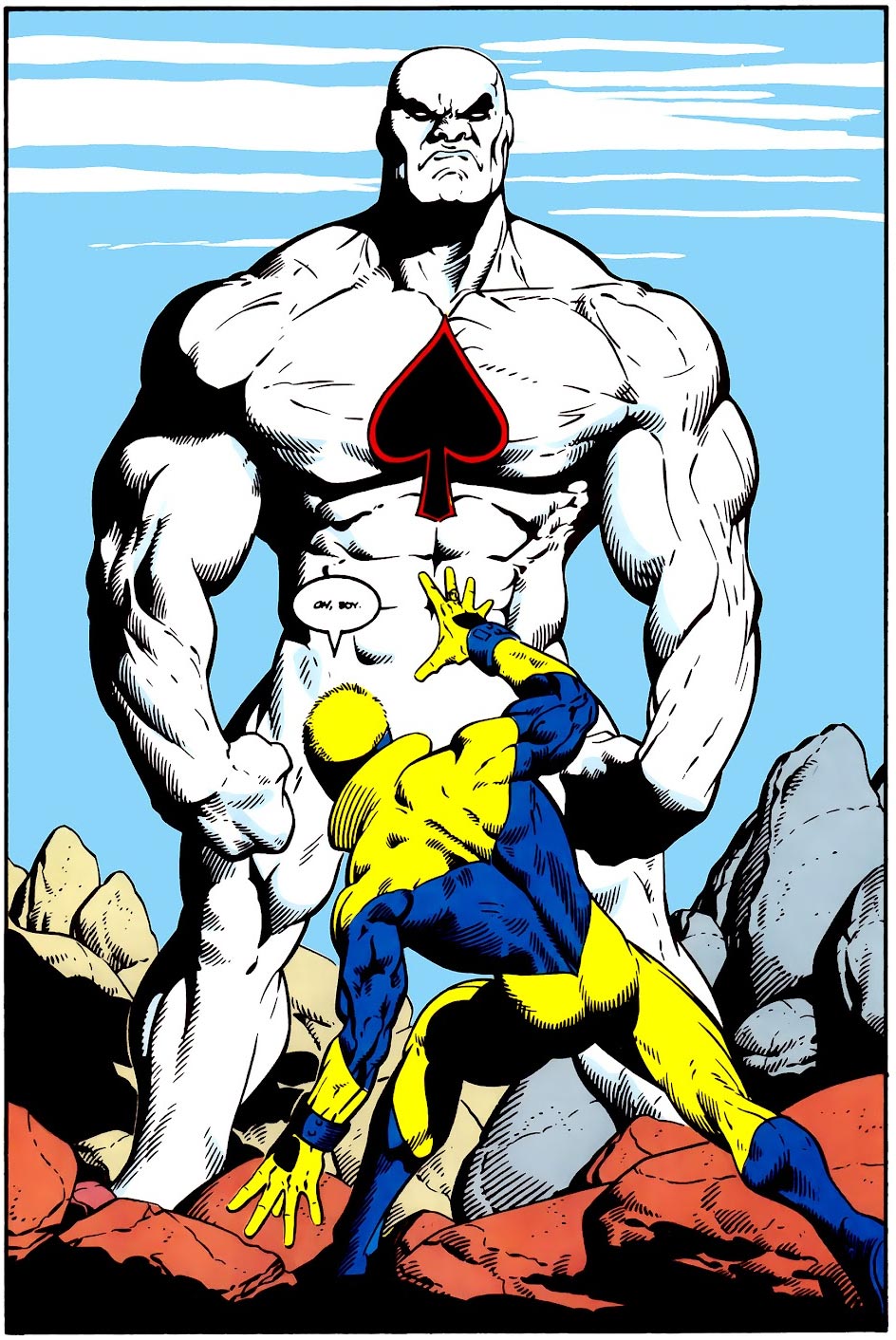 Yeah, Justice League #4 is a Boosterrific comic, even if I do say so myself. 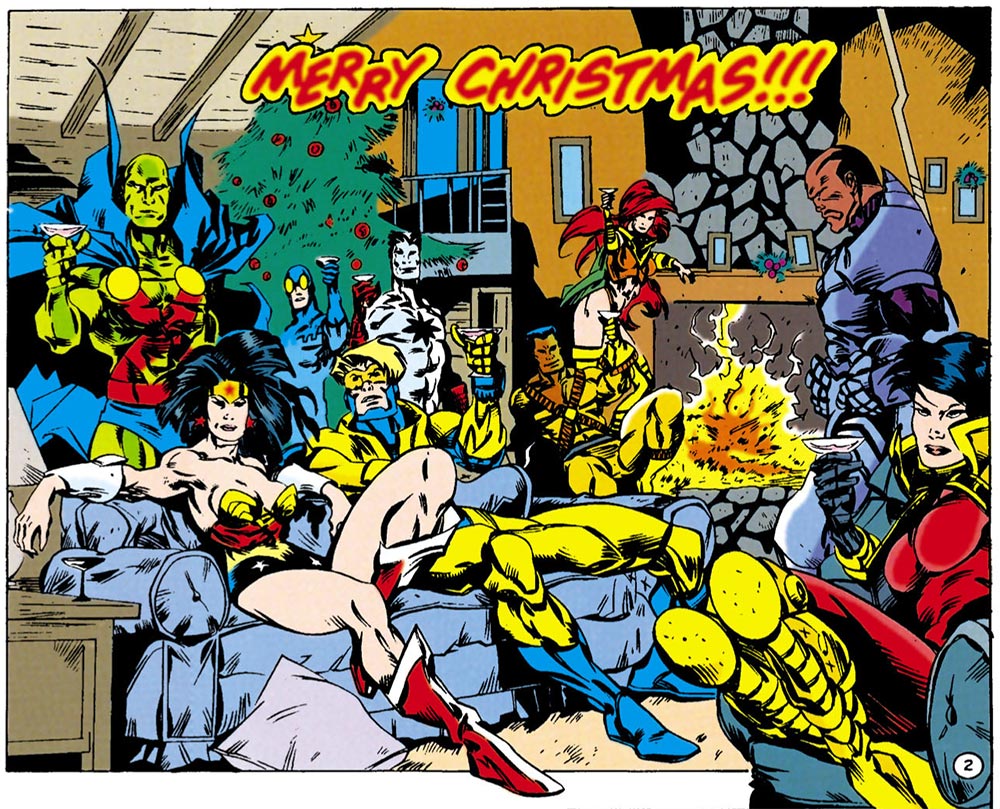 Say whatever you like, Batman, but there will always be a Justice League to wish everyone a Merry Christmas.

I'm sure I'm not the only one who saw the Mess Hall in the Justice League Hall of Justice in last week's Superman: Kal-El's Return Special #1 and thought, "That looks just like Warriors!"

If you don't remember Warriors, it was a bar filled with memorabilia from Guy Gardner's crime-fighting career. (Warriors is not to be confused with Planet Krypton, the superhero-themed restaurant found on multiple Earths.)

As you can see, almost everyone who was anyone in 1995 made this party, including Booster in his Extreme Justice-era Mark IV power armor. It's no tuxedo, but it *was* keeping Booster alive at the time, so come as you are, I guess.