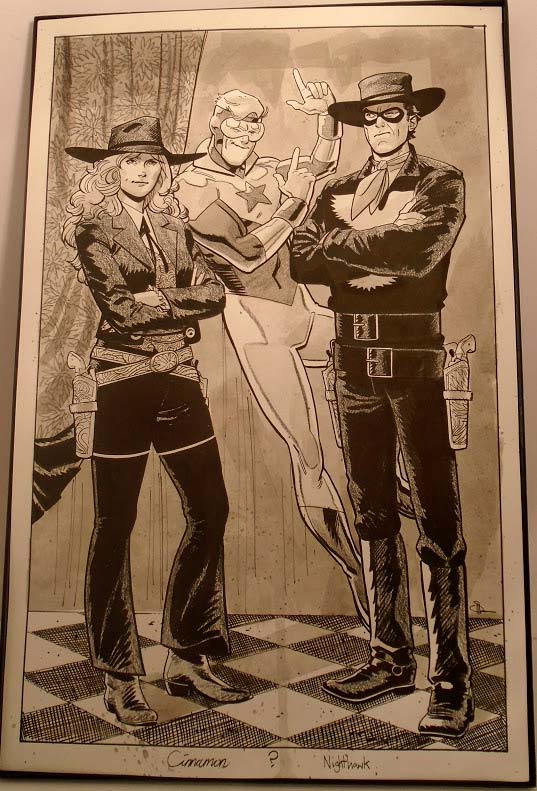 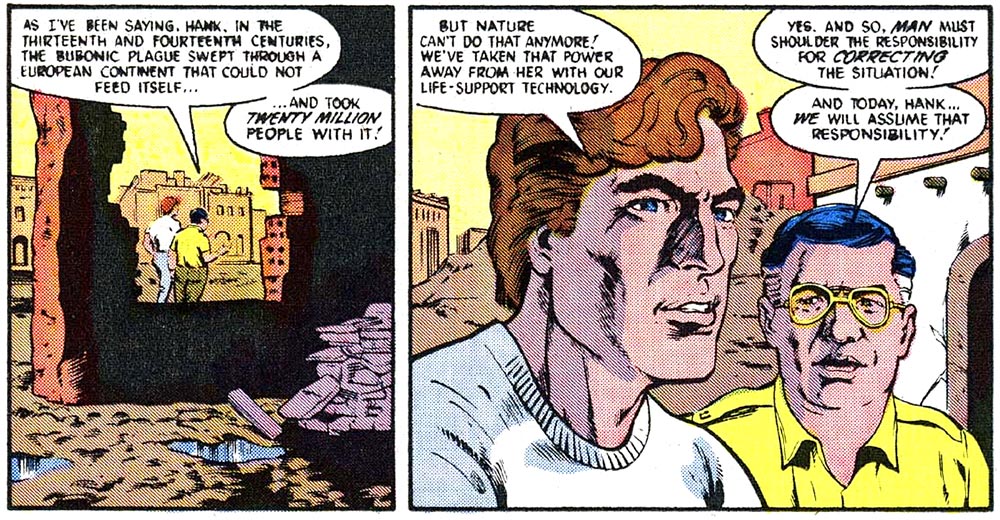 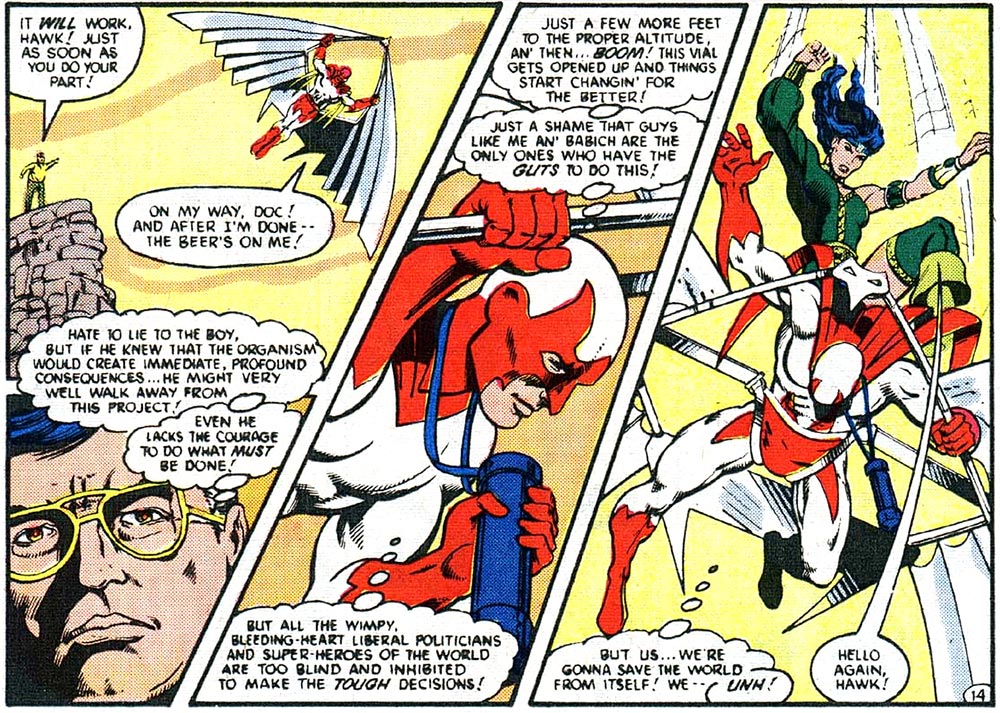 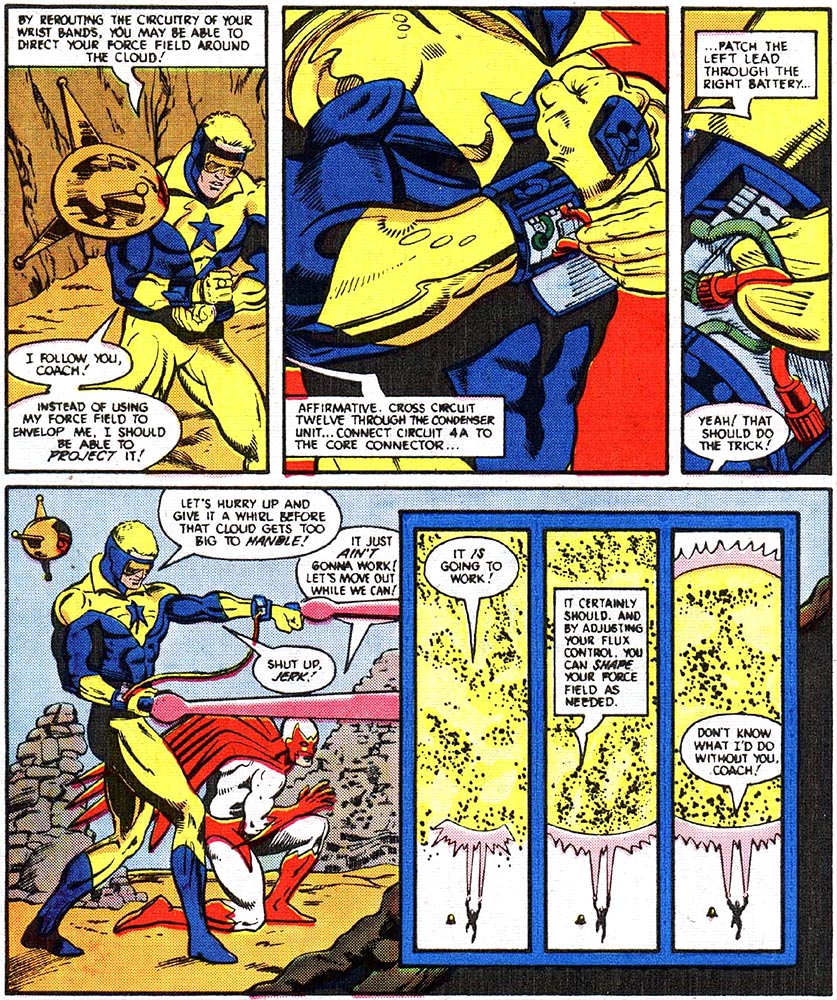 This Day in History: Make Dove Not War

Booster Gold has never been especially lucky in love. In fact, he's never been very lucky in anything at all. But his love affairs stand out as particularly star-crossed.

While Booster has had semi-stable relationships with actress Monica Lake and Firestorm's main squeeze, Firehawk, he's just as likely to be seen striking out. Justice League International fans may recall Booster made a fool of himself hitting on Justice League Europe liaison Catherine Cobert. Superboy fans might remember the embarrassing time Booster and Beetle both failed in their desperate attempts to pick up Superboy's fellow Raver Aura. But does anyone remember that time during Invasion! when Booster Gold struck out with Dove?

As seen in a flashback in Hawk & Dove Volume 3, #1 — released 27 years ago today! — Booster decided that the middle of an alien invasion of Earth was the right time to make a move on Dove. (The heart wants what the heart wants!) Both Dove and Hawk disagreed. 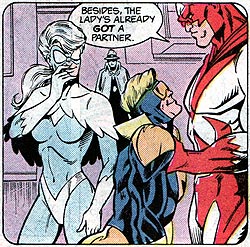 Awk-ward! For a Time Master, Booster Gold can have some pretty bad timing.

I'm always particularly tickled when I see Booster Gold referenced outside the world of comic books. So you can imagine my amusement when I saw that Kissing Suzy Kolber, an Uproxx.com satellite site devoted to NFL football, had referenced Booster Gold (and Skeets!) in an article on superhero predictions for Super Bowl XLIX.

BOOSTER GOLD: I really gotta hand it to the Seahawks– their brand integration is top notch. I don’t want to know how much the Mars company pays them for all that Skittles stuff. Gotta be boatloads of money. Plus, as a glory boy myself, I really, really dislike Pats fans. Skeets and I think the Hawks take it by 3.

Hard to doubt a pick made by a time-travelling quarterback. To read the predictions of other heroes, visit out kissingsuzykolber.com.

The cliffhanger story from Justice League International #9 is continued in today's The Fury of Firestorm: The Nuclear Men #9. Bombers are on the rampage in Paris! Firestorm has transmuted the Eiffel Tower into rose petals! New Firestorms appear on every page! With so much going on, how does DC tease the issue in their solicitation text?

Oooh, Doesn't that sound exciting! At least it doesn't give much away since the JLI is on the cover and all. Certainly, it sounds better than "we care so little about Firestorm that we're going to promote it with a tie-in to a book we've already canceled."

For those of you interested in the events of this issue despite the fact that it will have Firestorm in it, you can read a 4-page preview at IGN.com. You gotta admit, Ethan Van Sciver's Yildiray Cinar's Booster Gold looks pretty darn good. (My fault. Van Sciver is only drawing the cover. Cinar handles interior art.)