In the wake of DC Cybernetic Summer, the past week has become all about Blue and Gold, so now would seem to be the appropriate time for me to make my argument in defense of their canonical, platonic relationship. In a nutshell, I say not everything has to be about sex.

In published canon, Booster Gold and Blue Beetle have been inseparable since the very first year of Justice League International stories. Their intimate platonic love, better known as "friendship," has been the basis for a lot of stories in the decades since in no small part because everyone enjoys spending time with people who so very much enjoy spending time with one other. We like Blue and Gold because they like Blue and Gold, and that's great.

Romantic love is also great. Who doesn't enjoy a good love story where two people find that they each complement the other and form a lasting paired set? Everyone wants to live happily ever after.

But not every great relationship has to be a romantic one. The difference between platonic and romantic love is physical. It's natural for a human to seek out romantic love; we're biologically programmed to want to reproduce. However, a sexual relationship isn't a prerequisite for lifelong happiness, and an intimate emotional connection needn't be merely a stepping stone to a consummated marriage. Perhaps I've read too many chivalric fantasies, but I happen to think that sort of chaste, close relationship is just as worthy of celebration as the romantic kind.

So let Booster Gold date Harley Quinn. (Or not.) But the real love of his life is and always should be Blue Beetle. No romantic feelings or sloppy kisses are necessary to cement that bond. 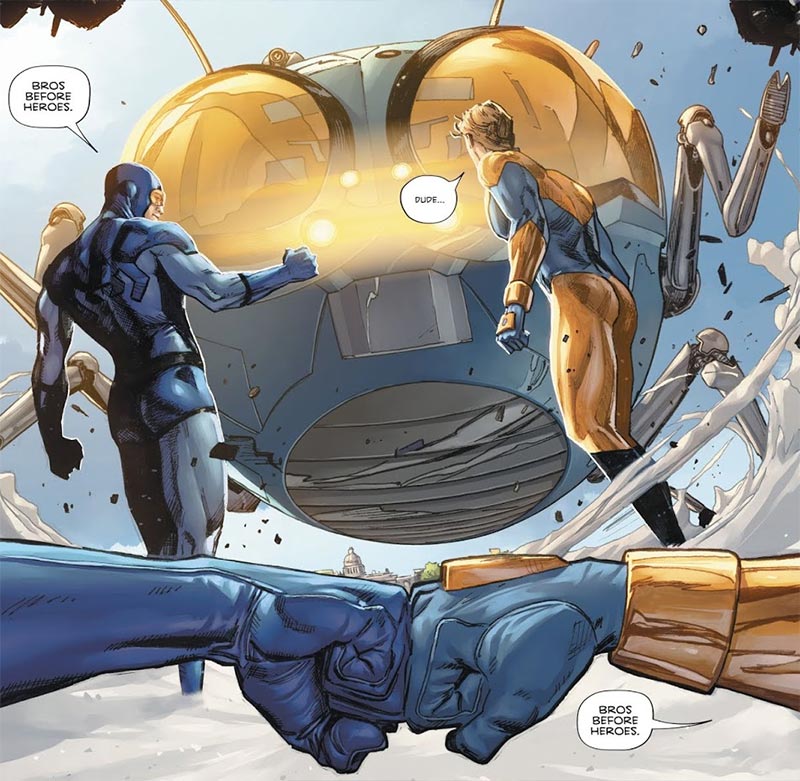 Fin posted on Aug. 7, 2020 at 8:21 AM
Say it louder for the people in the back!
In all seriousness, though, this is very nicely and succinctly put. I've always personally felt romance cheapened a lot of bonds (but that might be because I *hate* romantic love stories. They're the poor writer's crutch), and it's always been nice to see their relationship, perhaps one of the deepest in the DC 'verse considering their penchant for refusing to let the other die/stay dead/die alone (if I read Tales From The Dark Multiverse right?) kept as a refreshingly unique (in modern popular culture) platonic bond. And these intense bonds are hallmarks of classical literature! So many mythological, legendary, gothic, etc. heroes share a similarly intense platonic love for a friend, that it allows for nice parallels (makes you wonder, too, if the last century or so hasn't societally changed to view platonic relationships in a less significant light than they're naturally worth). It also allows for *gasp* more creativity and originality! Because let's face it. Friends-to-lovers is the biggest cliché out there.
In summation (because I rant): I agree wholeheartedly with what you're saying. And thank you for saying it.

A great friendship is priceless; its worth far above that of gold (no pun intended), rubies, or diamonds!

Far too many people believe that love *must* equal romance, but love has always been far, far more than simply 'romance'. Romance is simply one facet of love, but it certainly isn't the whole story. Nor should it be the whole story; humanity could not operate without the other forms of love and affection.

Long live the friendship of the Blue and the Gold. And bring on the chivalry - this world desperately needs it!

Eskana posted on Aug. 8, 2020 at 10:26 AM
Agreed! I love stories about people who are best friends, but oddly they are often hard to find in media. Almost always, if there are best friends, their friendship is just a back-burner fact to the main character's adventure/love story with someone else. If the friendship is front and center, people can't stop "shipping" them as a romantic relationship... it happens almost every time (Blue and Gold, Sherlock and Watson, in the Aubrey-Maturin series, in "Hercules: Legendary Journeys", etc). But I just love seeing two people be absolute best friends. I hope Blue and Gold stay this way, and people can just appreciate it as it is.

Also, I just have to add, that I think I will always have a forgiving view of "Heroes in Crisis" just because of some of the moments it gave us! It was their first team-up since Infinite Crisis, really (not including time-travel.)

Cort posted on Aug. 9, 2020 at 6:00 PM
Well written and great responses to this. I can't agree more. I wouldn't bat an eye if Booster was gay or bi or whatever else, but there's something truly special and nice for two friends to love another and express it, solely as friends and companions. I like to see more compassion and normalising of caring and openly expressed love between friends. You said it right in there are many wonderful types of love. It's a truly beautiful thing, and one of the absolute genuine draws of what makes these two characters great. And how natural it felt reading their friendship grow over the years.

This is the kind of article that always keeps me coming back not just to Booster but Boosterrific here.

Pat posted on Sep. 18, 2020 at 12:26 AM
I always loved Booster Gold. He seems to be one of the under-appreciated characters at DC Comics. Post-Crisis did a good job in emphasizing his connection to the Linear Men and time travel, as well as the future of Superman. I just think he could play a more important role in the formation of the Justice League and the progression of heroes. His connection to Time definitely is an asset that can be incorporated into the mainstream Justice League. Though I think Justice League International is the place for him.

As for Blue Beetle, I am not certain I like what DC has been doing with the character as of late. I do think that his friendship with Booster Gold is very important. I am really hoping for a Booster Gold/Blue Beetle movie.

Today we celebrate the birthday of one of the Legion of Super-Heroes' most prominent members, Ultra Boy. Ultra Boy and Booster Gold go way back: Ultra Boy was one of the first 3 heroes to "greet" Booster Gold in his debut in 1985. 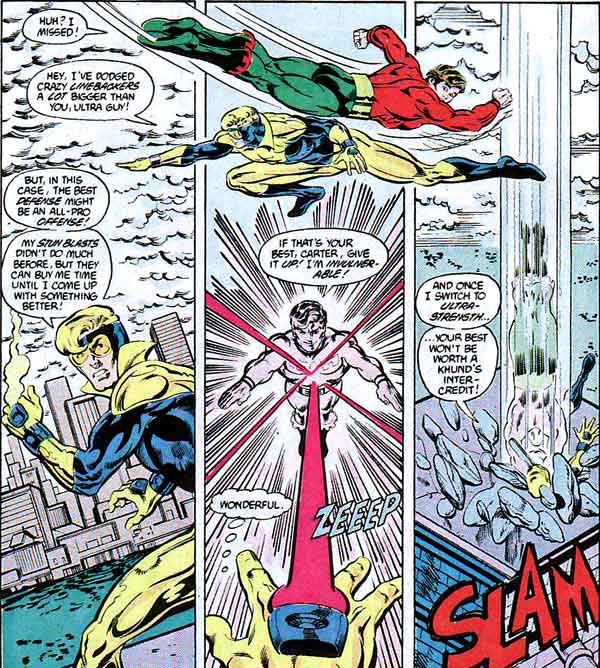 While their relationship may have started off on the wrong foot, it improved over time. The two heroes from the future would meet one another time and time again. As you might expect with Ultra Boy, whose powers only work one at a time, only one of the pair can ever seem to remember the other. 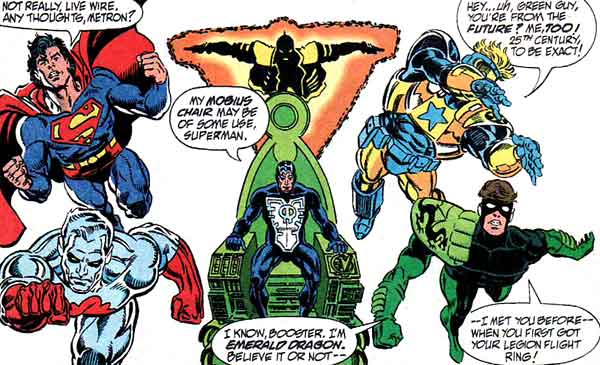 Certainly, it doesn't help that for years, the two seemed to be constantly switching costumes or noms de guerre. Then time was re-written and everything old was new again. As all good time-cops know, anyone who doesn't remember their history is doomed to repeat it. 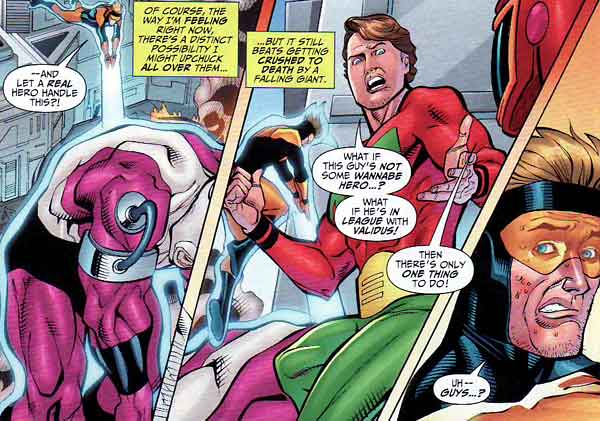 Here's to you, Ultra Boy. Even if you can't remember your birthday, we can.