Putting a Bow on It

Those of you who follow Boosterrific on Facebook have already seen this, but for those of you who don't, Brian Miller of Hi-Fi Designs posted this yesterday: 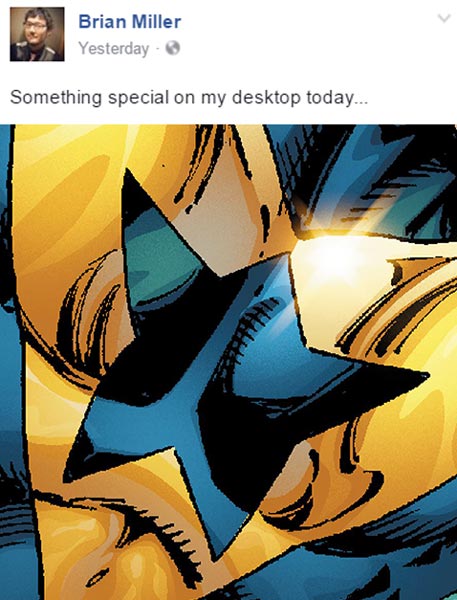 To recap: First Dan Jurgens tells us that he's drawing "BG". Then Norm Rapmund says he's inking someone with a star on his chest who isn't Captain America. And now Hi-Fi designs removes any lingering doubt. This is definitely a Booster Gold cover.

Jurgens, Rapmund, and Hi Fi were the art team for most of the late, lamented Booster Gold Volume 2. Isn't it nice to have the band back together?

If you'd like to reward Miller for sharing the image with us, consider donating to his Kickstarter campaign for the Femme Mystique graphic novel. Good luck, Brian.

ariel posted on Feb. 22, 2017 at 7:22 PM
If that is the booster flinstones crossover cover, it must be a zoom of the actual cover because i don't see any flinstones in it. So, I still hope...

Today's post is going to be old news for a lot of you, but after my rant yesterday, I felt compelled to run this today.

Dan Jurgens and Norm Rapmund working together again is great news, but it's not unexpected. When DC released the April solicitation for Booster Gold/The Flintstones Annual #1 back in December, the solicitation included this line:

So although neither Jurgens nor Rapmund told us why they're collaborating on a cover featuring Booster Gold, I think we can put two and two together.

Booster Gold/The Flintstones Annual #1 will go on sale on March 29 with a $4.99 cover price. The standard cover is by Mike Allred and will also feature Booster Gold, so bring $10!

Thanks to bennibeard for linking to Rapmund's tweet in the Boosterrific Forum.

As the DC Comics April 2017 solicitations began trickling in, the big news is that Superman is soon to be a pair of red shorts and a yellow belt away from his classic costume.

As happy as that makes us long-time Superman fans, I have to wonder if that doesn't signal bigger reversions for the DC Rebirth Universe.

Last month, we saw that Booster Gold will be appearing in a crossover with The Flintstones. The cover included in those solicitations clearly depicted Booster in his pre-Flashpoint costume. 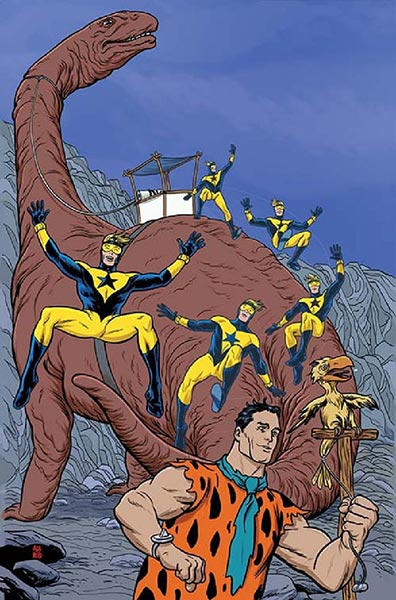 I had assumed that the costume on that cover was an accident on the part of cover artist Mike Allred, who perhaps was using an outdated template. But since DC is now clearly backsliding on Superman's look, what's the chance they're finally fixing Booster's atrocious New 52 costume?

Meanwhile, you can read more about DC's plans for Superman at Comicbook.com

I did not see this one coming.

When I woke up on Monday and checked my phone, I had to be sure that it wasn't April first. According to Russ Burlingame of ComicBook.com (the first to bring this to my attention), Booster Gold will be making his long awaited return on March 29, 2017.

In the pages of The Flintstones!

Welcome to the 25th Century, where the Earth is a polluted, post-industrial nightmare, most animals are extinct and reptilian aliens are invading cities across the planet! In their time of need, the world’s citizens turn to the time-traveling Booster Gold to save the day. To learn why these aliens are attacking Earth, Booster dives deep into the prehistoric past to see what happened when they first came to the planet. In this bygone era, Fred Flintstone and Barney Rubble must help Booster learn the truth and return to his own time armed with the information that will bring down the invaders – if Booster can convince them to help him out.

As a huge fan of both Booster Gold and the work of Flinstones writer Mark Russell, I couldn't be more excited. March can't get here soon enough!

Some progress is better than no progress.

Which just leaves me with one last burning question: is this the Booster of the new52 universe or the original Booster?

Boosterrific [Official Comment] posted on Dec. 14, 2016 at 2:13 PM
I'll be shocked if it's not the New 52 Booster. Although I was shocked to see Booster in Bedrock, so anything goes, I guess. 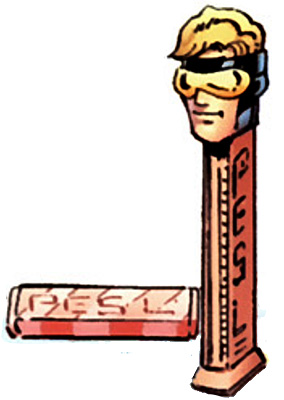