For quick reference when talking about Booster's costumes, Jay Park has created this sketch: 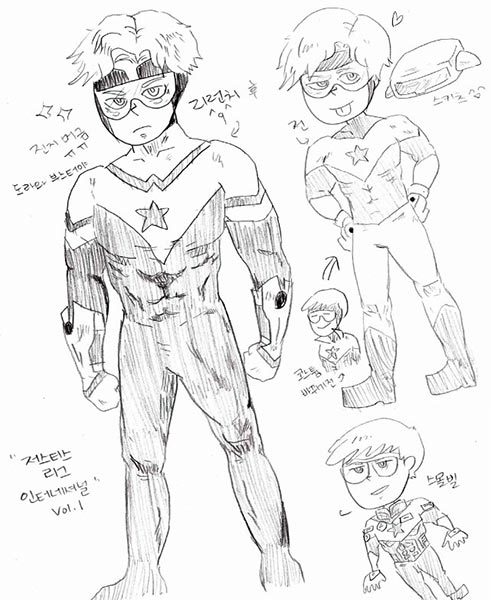 Jay's Deviant Art profile indicates that she is from South Korea. Booster Gold has fans everywhere! You can see more of Jay's work at jaywani.deviantart.com/.

I'm sure that if Booster Gold thought it would get him some extra attention, he'd change his gold to green and orange polka dots.

No man is an island. For Micheal Jon Carter to become the Booster Gold we all know and love, he had to have some help along the way. Which supporting character has contributed the most to your enjoyment of Booster and his exploits?

Boosterrific [Official Comment] posted on Oct. 10, 2013 at 4:22 PM
I always figured you for a Conglomerate fan, Shag!

Eyz posted on Oct. 10, 2013 at 5:38 PM
on a slightly related note, I'd love to see the return of characters like Dirk Davis and Trixie

but, yeah, since a new Booster would probably be focused around the heroics/time stream protector, I doubt we'll see "business-Booster" cast back anytime soon...

I enjoy that Booster Gold was a college athlete, but it's his "never-say-die" attitude that keeps me wanting more. Seems I'm not alone.

Last week's poll question: What do you like most about Booster Gold? (44 votes)

To promote Breast Cancer Awareness Month in October, the NFL likes to add the color pink to every team's football uniforms. If this is such a good idea, maybe super heroes should adopt a similar strategy.